France have an abundance of talent in their squad going into the World Cup and their attacking options are second to none, upfront alone they have Lacazette, Giroud, Mbappe and of course, Griezmann. Whilst his club future is uncertain he’s likely to start for France in the majority of their games and with his return of 19 goals in 51 games so far for his country he’s likely to add a fair few more.

Thomas Muller is an interesting one, on one hand he always seems to pop up with a goal, on the other he’s having a pretty barren goal scoring run. At 20/1 he’s likely to provide some value but don’t be surprised if he either scores 15 goals or none. Germany will probably go far in the tournament and whilst they have other goal scorers Muller is the golden boy of German football and will probably be their #1 choice. 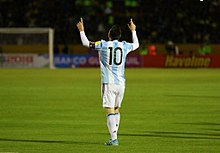 Lionel Messi is down as favourite with most bookies and it’s a bit of strange one to say the least. Argentina struggled to qualify and it took a hat trick from the G.O.A.T to see them through to the finals but it’s unlikely he’ll be able to repeat his heroics at the finals due to their mismatched squad, if Argentina finally put it all together he might be able to notch a few though.

Football’s other golden boy is vying for the golden boot too and being in a group with Iran and Morocco, he could reach a reputable total before even getting out of the group. Whilst he had a lean spell at the start of the La Liga season he still finished with a goal every 89 minutes, better than most strikers the world over. Whilst you shouldn’t count him out, Cristiano is another player hoping the rest of his squad can pull their weight.

Neymar is spearheading a nation trying to right the wrongs of the 2014 World Cup on home soil and they’re likely to be a different proposition to the team thrashed 7-1 by Germany. With a youthful team full of attacking threat they’re looking to go all the way and with the world cup odds paddy power have given its not unlikely and Neymar will likely reap the rewards. Games against Costa Rica, Serbia and the Swiss will likely add to his tally early and he will surely build on it over the course of the tournament.

The heir to Germany’s #1 striker spot, Timo Werner has come on leaps and bounds in the last two seasons, scoring 42 goals in 77 appearances for RB Leipzig. He’s managed 7 goals in 12 internationals too so don’t be surprised if he notches a few more.

Whilst his goal scoring exploits with Liverpool this season have been extraordinary, he’s unlikely to match that at the World Cup. Egypt are likely to be one of the whipping boys of the finals and won’t go far. His odds are more in homage to his club form rather than his likelihood.

Whilst Jamie Vardy feels as though he’s been around forever now, this will be his first World Cup and England Fans should be pretty hopeful of his contribution. Finishing the Premier League season with 20 goals in a team that massively underperformed, he can probably score a few goals in an England side that’s likely to underperform.

At 19 years old, Mbappe is the youngest player on this list and it’s a surprise he’s even being considered for the crown but should he start the tournament well, he could take the place of someone in the France starting 11 and will get plenty of chances to score.