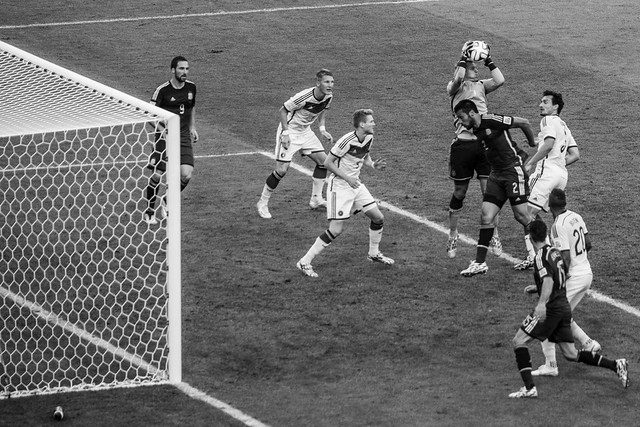 “German goalkeeper Manuel Neuer catching the ball against Argentina during the last World Cup final” (CC by 4.0) by Jimmy Baikovicius

Over the two weeks building up to the start of the 2018 World Cup in Russia, we’re publishing a series of previews with a special focus on each team’s best players and any details that might be of interest to FPL managers. Today, it’s the turn of Group F with Germany, Mexico, South Korea, and Sweden. On June 17th, Germany are playing Mexico, and Sweden are facing off against South Korea the next day.

With Germany, the reigning World Champions are returning to the tournament and it doesn’t look like they’ve lost any quality. On the contrary, with a solid defensive basis and an exciting mix of talent up front, Die Mannschaft might well be stronger than the squad that won the title four years ago.

In midfield, Real Madrid maestro Toni Kroos is likely to be directing the game for the Germans. The midfielder is a vital link in Madrid and an invaluable piece of the puzzle that has won the Champions League three times in a row now. He’s easily one of the most complete midfielders in the world, with a great vision of the game, practically flawless passing, and a great right foot, both in play and from set pieces, just to name a few of his strong points.

Manuel Neuer is another key piece for national team coach Joachim Löw. His importance as goalkeeper and captain of the World Champions was underlined when it became clear that, despite a season dominated by injury, Neuer was still included in the final team sheet, with Löw stating that he is in fact his number one goalkeeper. The German number 1 combines cat-like reflexes with a great management of both his area and the entire back line. Add to this his excellent ability with his feet to keep the ball in play and start the build-up from the very back, even under pressure, and it’s not hard to see why he’s considered by many to be one of the best goalkeepers in the world.

After the victory in Brazil four years ago, captain Philip Lahm retired from professional football, which left many people with a big question mark: who would be filling the place at right-back, both for Bayern and Germany, that Lahm had occupied with fantastic results for the past decade? The answer came from Bayern, who bought a relatively unknown player by the name of Joshua Kimmich in the summer of 2016. Kimmich is probably one of the most versatile players in the world right now, being able to play anywhere from attacking midfielder to right-back and even central defender. With his endless energy, his tactical awareness both offensively and defensively, and his eye for the pass, he quickly turned into one of the world’s most complete right-backs.

Germany is part of a World Cup for the 18th time in history and they are, yet again, considered one of the big favourites for victory in the Final again. If concentration levels are up to scratch, the group shouldn’t pose too many problems for them. If you consider Germany to be the likely winner again then check out the VM odds at Nordic to see what backing them might win you.

Mexico have participated in 7 World Cups since 1986 and every one of those participations has seen El Tri reaching the knock-out phase of the tournament. The Mexican squad always boast talent, and they’ll be hoping that their current mix of experience and talent is enough to go far in Russia.

One of Mexico’s very biggest talents at this moment is Hirving Lozano, who transferred from Pachuca to current Dutch champions PSV last summer. The 22-year old scored 17 goals and assisted 11 in 29 Eredivisie games in his first season in Holland, resulting in rumours of a transfer to one of Europe’s greats already. Lozano preferably plays deep on the left wing, from where he can cut inside and put his excellent right foot to use. He’s fast, he’s not afraid of the 1v1, and he has a nose for the goal. His 4 yellow cards and 2 red cards in the league last season show that he still has some work to do in terms of his temper, though.

In the midfield, Real Betis midfielder Andres Guardado is the one to watch for Mexico. He was vital in Betis’ more than surprising 5th-spot finish and he’ll be vital for Mexico in Russia this summer. Despite his small stature, the former Valencia, Leverkusen and PSV-man often leads the press and wins back many balls for his team. His 8 assists in LaLiga last season show that he also contributes in an attacking sense, which is thanks to his wonderful left foot. With Guardado, Mexico can’t only count on a warrior in the midfield, but on a set piece specialist as well.

We could’ve looked at Porto’s Hector Herrera or West Ham’s Chicharito, for example, but we want to mention Carlos Vela as well. The quick and small attacker was destined to become a star at Arsenal in the Premier League, but some initial issues with his license (due to his limited time playing for the national team at the time) caused him to never really take off at the Gunners. He went on to make a more than serious mark on LaLiga side Real Sociedad though, from where he transferred to Los Angeles during the last transfer window, for whom he scored 7 and assisted 2 in just 12 games. On a good day, Vela is nothing less than spectacular and in combination with Lozano and Chicharito, El Tri have an attack to fear.

Germany will most likely be out of their league, but Mexico should be able to keep Sweden and South Korea at bay. After that, it remains to be seen how far in the tournament they’ll get.

Far from the favourite in Group F, South Korea still has some interesting things to offer. Despite many of their players outside of Europe, mostly at home and in Japan, some of their internationally experienced players are at great moments in their career, both age- and performance-wise.

The absolute star of South Korea is Tottenham Hotspurs attacker Son Heung-Min. The FPL managers among us will definitely know this name, as last season he again turned up as a must-have man at different points in the season. Basically the premium replacement of one of Tottenham’s front three (Kane, Eriksen, Alli), he still managed to get a whopping 12 goals and 6 assists in the PL last season. He’s quick, both with and without the ball, he’s technically gifted, and he can both score and set up a team mate. While South Korea might not stand out in Russia, Son definitely has the ability to do so.

Another name in the South Korean squad that might sound familiar to many FPL managers is Ki Sung-Yueng. The 29-year old midfielder player 25 games for Swansea in the Premier League last season, in which he scored 2 goals and assisted just as many. Despite the club’s relegation, Ki has shown on more than occasion, and not just last season, that he’s a complete midfielder who can keep a team running, even when the circumstances are not ideal. He passes the ball, is much stronger in the one v one’s than his appearance would suggest, and has a great work ethic on the pitch. He’ll form the South Korean engine this summer in Russia.

One of the biggest South Korean talents, if he can still be called that, is Hwang Hee-Chan, who plays for Austrian outfit FC Red Bull Salzburg. The 22-year old striker scored 13 goals and provided 4 assists in 37 games for Salzburg. Those include 2 goals in Champions League qualification games, and 2 goals and 2 assists in the Europa League to help the Austrians reach the semi-finals. He’s likely to get plenty of minutes during the World Cup, so it’ll be interesting to see if his goal instinct can serve his country as well.

South Korea will have to be on top of their game, especially against direct rivals Sweden and to a lesser extent Mexico, and hope for some favourable results in the other group games. If not, the group stage will probably be the final stage for them in Russia.

Without Zlatan Ibrahimovic, the Swedes managed one of the big surprises in the build-up to the World Cup by overcoming World Cup mainstays Italy in a direct, two-way confrontation for qualification. Sweden counts on some individual talent, but their great strength is and will have to be their solidity as a team.

Sweden’s best individual player at the moment is probably Emil Forsberg. The winger, who plays for Red Bull Salzburg and has 35 games for Sweden under his belt already, is an important of Sweden’s attacking plans. He provides speed and the ability to beat a man in a 1v1, which gives the team some much-needed unpredictability up front. On top of that, he can score as easily as he sets up his team mates, so he might shine in Russia.

John Guidetti is another one of Sweden’s best players, who some of the more dedicated FPL managers might recognize as an ex-Man City player. His stay there, though, was largely dominated by loan spells at clubs like Feyenoord, Celtic, and Celta de Vigo. During these spells, Guidetti did show some serious quality at times, like at Dutch giants Feyenoord where he scored 20 and assisted 6 in just 23 games. He will likely start up-front with Ola Toivonen (Toulouse) and Swedes all over will be hoping that he’s found his goal instinct again, in time for their first crucial game against South Korea.

At the back, much Swedish hope will be placed on Manchester United’s centre back Victor Lindelof. The 23-year old is considered by many to be one of Europe’s most-promising defensive prospects and his chances of living up to those expectations have definitely not been hampered by playing under José Mourinho. Though far from becoming a long-term start for United, he did get up to 29 games last season, and he left a good impression overall in those games. The young central defender is tall and physically imposing, while his passing is usually immaculate, if somewhat risky at times. Combine this with his great tactical awareness during games and his lack of fear to build up from the back, and it’s clear why he’s a key asset for Sweden coach Janne Andersson.

Sweden will most likely have a tough time in Group F, but then again, people expected them to fail to qualify against Italy and here they are. If they can form the same hard-to-break-down block, then they might cause a surprise at some point, though the knock-out stages definitely seem out of reach.