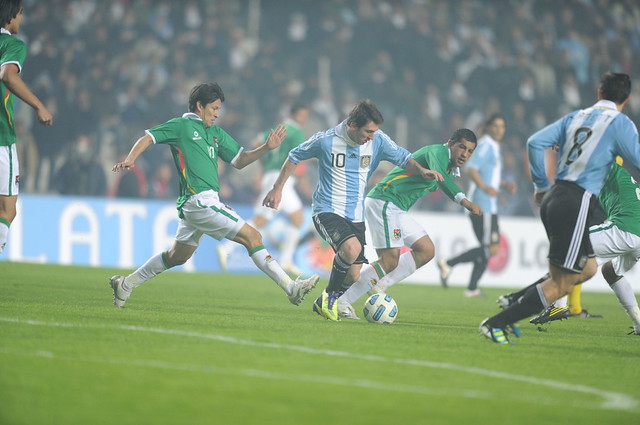 “Lionel Messi in action for Argentina during the Copa America” (CC by 4.0) by LGE

Over the coming two weeks, we’re publishing a series of World Cup previews with a special focus on each team’s best players and any details that might be of interest to FPL managers. Today, group C with Argentina, Croatia, Iceland, and Nigeria. On June 16th, Argentina are playing Iceland, and Croatia are facing off against Nigeria. Argentina are generally the 4th favourites with the bookmakers to win the World Cup at odds of around 10/1. For comparison, England Odds are about 20/1 as the 6th favourites.

If there’s one man carrying the hopes, dreams, and pressures of an entire nation this summer in Russia, it’s Lionel Messi. The two-time World Champions, led by Jorge Sampaoli, will be hoping that with a 30-year old at the height of his extraordinary career, they can avenge the lost World Cup final against Germany in 2014. Messi is considered by many to be the best player in the world, and probably in the entire history of football, to such an extent that his teams (Barcelona and Argentina) eventually all suffer from “Messi-pendence”. After 45 goals and 18 assists in 54 games last season, Argentina will be hoping that Messi can do the one thing that still separates him from the great Diego Armando Maradona: bringing home the World Cup, after a seemingly endless harvest of prizes and awards over the past decade.

It’s likely that Messi will be joined in attack by Juventus’ Paulo Dybala, who is considered by the Italians to be their own so-called franchise player, like Messi at Barcelona, Ronaldo at Real Madrid, and Neymar at PSG. The two of them haven’t always played together in the national team due to their seeminly similar styles of play. Dybala has the ability to both score and assist, which is what he does in abundance for Juve (26 goals and 7 assists in 46 games for the Italian giants). He’s already hard to stop at Juventus, imagine once he’s in the same team as Messi.

The Albiceleste attack is completed by another Juventus superstar, though one some years older than Dybala. After successful stints at Real Madrid and Napoli, Gonzalo Higuain joined Juve for €94 million in 2016, for whom he scored 23 goals and assisted 8 in 50 games last season. Less quick silvery than his fellow attackers, Higuain is one of the world’s most clinical finishers in the area. He combines well, plays the spaces, and scores goals, lots of them.

Despite the embarrassment of talent in offensive terms, La Albiceleste definitely lack quality in back to be considered an all-out favourite for the title. They should comfortably pass the group stage, though.

It’s often said that football matches are won in midfield. If that’s the case, then Croatia should be considered serious contenders for a finish high up the board. The team going to Russia this summer is likely to be strongest since Davor Suker led the Croations to a bronze World Cup medal in 1998.

The crucial man on the midfield is and will be Real Madrid’s Luka Modric. At 32 years old, the midfield maestro seems better than ever, which is why he surely was one of the first names Madrid ex-coach Zidane wrote down when deciding the starting line-up for next match. Modric combines a tireless work ethic with sublime control of both ball and space, while his passing forms the engine of the teams he plays in.

He’s joined on the midfield by FC Barcelona’s Ivan Rakitic, one of Europe’s best all-round midfielders with a knack for scoring goals. He usually plays in a bit more advanced role in comparison to Modric, though after years of playing together on the Croatian midfield, the two of them interchange positions effortlessly during the game. His physical presence, nose for the goal, and excellent technique make him invaluable to the national team.

In attack, it might be worth keeping an eye on Eintracht Frankfurt striker Ante Rebic (on loan from Fiorentina). He scored 9 goals and assisted 3 in the Bundesliga last season, and he ended the season with a huge bang by scoring a hat trick against Bayern Munich in the cup final that gave Frankfurt the unlikely victory over the Bundesliga giants. With Juventus’ Mario Mandzukic, Inter’s Ivan Perisic, and Milan’s Nikola Kalinic going to Russia as well, Rebic’ minutes might be limited, but if he does get to play, tune in.

Expectations are high in Croatia building up to this summer and it looks like they should make it though the group without too much trouble. The question is whether they can finish above group favourite Argentina.

Iceland were one of the surprise packages during the Euro Cup two years ago, when the National team surprised the World by qualifying and then reaching to the tournament’s quarter finals where they eventually lost 5-2 to host nation France.

Like back in France, Iceland’s best player this summer is Everton’s Gylfi Sigurdsson. Despite a disappointing last season, which saw him moving from Swansea to Everton and suffering from an injury to prevent him from settling in his new team, all eyes are still on him, and rightly so. On a good day, the creative midfielder can lead his team to great results. His vision of the game, his passing, and his set-pieces make him one of the Premier League’s most feared midfielders, and the Icelanders will be hoping he can become the same in Russia.

Another key piece for the Iceland national team is Johann Gudmundsson, who plays in the Premier League as well, for last season’s surprise Burnley. Gudmundsson is quick, has great technique, and has an eye for the assist. Under Sean Dyche, the young midfielder has grown into a tireless winger / midfielder with good tactical awareness, something that will be crucial if Iceland have any hope of booking some satisfying results this summer.

There’s not just Johann, though. Iceland counts on another Gudmundsson as well, though to a lesser extent, namely 20-year old PSV winger Albert Gudmundsson. Though he’s valued but brought slow at the Dutch champions, he’s already made more than his mark on the national team, by scoring 3 goals in just 4 games. Iceland are not the most inventive team in Russia and Gudmundsson might be the man to add some flair and creativity to the side. He probably won’t be starting, but have a look at him when he does play.

On paper, Iceland will be battling Nigeria for third place in Group D. That’s what was being said about them in 2016 though, and they reached the quarter finals, so it’ll be interesting to see what they can bring to the table in Russia this summer.

If different media are to be believed, Nigeria might well turn into one of the most entertaining sides to play during the World Cup in Russia. The combination of experienced top players and young-and-upcoming talents playing in Europe is always an interesting one.

Most FPL managers will know the name John Obi Mikel, but a lot less of them will be able to name the team he’s playing for nowadays. At still only 31 years of age, the ex-Chelsea midfielder is one of the biggest stars in the Chinese Super League, playing for Tianjin TEDA. He has experience at the highest level, which is not something that can be said for many other players in the squad, he knows how to balance out a midfield, and he can feed the attach when necessary.

Another key asset for the Super Eagles is Arsenal’s Alex Iwobi. He’s still only 22 years old, and with 5 goals in 18 games under his belt he’s considered the future of Nigerian football for the coming years. Playing as a forward or an attacking midfielder, Iwobi often manages to function as a connection between the midfield and the attack. He has the vision to create chances for his team mates and the drive to appear in front of the opposition’s goalkeeper as well. His form could be a big influence on Nigeria’s performances in Russia.

In goal for Nigeria will be one of the tournament’s youngest players and one of Europe’s most interesting goalkeeping talents. At just 19 years old, Deportivo la Coruña keeper Francis Uzoho is an exciting prospect. With a few LaLiga games under his belt already, as well as several games for the national team, Uzoho will be ready to show himself to the football world this summer. He’s an athletic player with great reflexes who’s not afraid to coach his team mates and show his authority in the area, despite his age. If you manage to catch a Nigeria game during the World Cup, he’s definitely one to watch.

Even though the mix of players and playing style of many of them is attractive, the group stage will likely be the final stage for Nigeria on the coming World Cup. Argentina and Croatia are a few levels above the Super Eagles, while Iceland will likely prove to be a tough nut to crack as well.