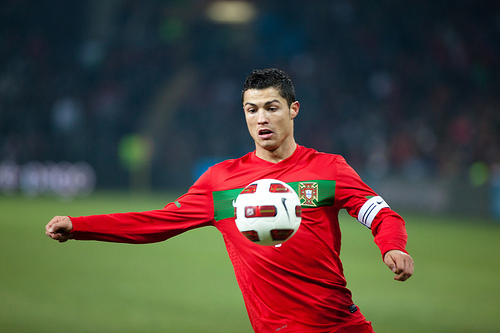 “Cristiano Ronaldo in action for Portugal” (CC by 4.0) by Themeplus

Over the coming two weeks, we’ll be publishing a series of World Cup previews with a special focus on each team’s best players and any details that might be of interest to FPL managers. Today, group B with Iran, Morocco, Portugal, and Spain.

On June 15th, Morocco are playing Iran, and Spain are facing off against Iberian rivals and reigning champions of Europe, Portugal, which arguably is the highlight of all the World Cup group matches. Despite Portugal being European Champions, Spain are favourites with the bookmakers to win this group. Keeping an eye on the odds and World Cup betting offers can help you pick the best players for your team and increase the fun of watching the football matches.

Former Portugal and Real Madrid coach Carlos Queiroz would’ve probably wished for an easier group for his Iran team, but Team Melli has improved over the last decade. It’s particularly in attack where the Iranians boast some interesting prospects. First of all, there’s AZ Alkmaar’s Alireza Jahanbakhsh, who last season became top scorer in the Dutch Eredivisie and was voted Player of the Season as well. Pacy, a good dribbler, and eye for goal, the winger is ready for a step up and Napoli is reported to be interested in his services. Alireza’s striking partner is called Reza Ghoochannejhad, who also plays in Holland, for SC Heerenveen, where he’s scored 32 goals spread over the past two seasons. He’s also Iran seventh-highest top scorer with 17 goals for the national team. Finally, there is Sardar Azmoun, who plays for Rubin Kazan in the Russian Premjer Liga. Though his past season wasn’t his most prolific (5 goals in 26 league games), he’s generally known for his killer instinct and ability to lean on defenses. At only 23 years old, he’s already bagged 23 goals in 32 games for Iran, so it’ll be interesting to see what he’ll do in Russia this summer.

Despite the presence of some attacking talent, our hopes aren’t high for Iran. Spain and Portugal are definitely our of their league, while Morocco should be better as well, so it looks like an exit in the group stage for Team Melli.

Morocco might be another surprise package this year, if coach Hervé Renard manages to keep all of his players motivated. The Eagles of the Atlas combine a powerful defense with an energetic midfield and a creative attack, with 6 players raised in Holland.

One of the most important players in the team is without a doubt Medhi Benatia. The tall and strong central defender has been at the European top for years already, first at Roma and Bayern Munich and currently at Juventus, and his quality and experience will be a decisive factor for Morocco. He’s both a defensive rock and an attacking threat at the same time, thanks to his excellent heading abilities.

Hakim Ziyech is probably the most talented player Morocco currently has, but the Ajax midfield maestro hasn’t always been in great relations with coach Renard. The two have made up though, and it certainly has paid out for the national team. Ziyech has a fantastic left foot, great vision, and at Ajax he’s improved enormously in terms of intensity and concentration. The Moroccans have a technical team, but most attacks will probably still pass through him.

An exciting, but less-known prospect in this team is the 24-year old forward Ayoub el Kaabi. The young attacker still plays in Morocco, for RS Berkane, where he’s scored 22 goals in 38 league games over the past two seasons. With 10 goals in 8 games, his record for the national team is even more impressive, so it’ll be interesting to see how he presents himself during his first World Cup.

Morocco has an interesting team with a lot of technically gifted players, but Spain and Portugal will probably fend them off in the group. A surprise could never be far off, though.

As the reigning champions of Europe, the Portuguese, under Fernando Santos, are considered an outsider for the title. Of course, what’s also true is that any team that counts on Cristiano Ronaldo can probably be considered an outsider, at the least. The Real Madrid superstar has just come off a third Champions League victory in a row (the fourth in five years!) and confidence couldn’t be higher. He scored 44 goals in 44 games last season and carries the hope of the entire nation in Russia. Can he lead them to deep into the knock-out stages?

In terms of talent, especially in attack, Portugal has one of the richest squads, and two players in particular stand out: Bernardo Silva and Gonçalo Guedes. The former crowned himself champions in England with Pep Guardiola’s Manchester City, while the latter quite literally teared it up in LaLiga for Valencia (on loan from PSG) last season. Both are quick, agile, and technically-gifted attacking midfielders who could be the perfect companions for Ronaldo up front. Silva missed some minutes this season due to Pep’s rotational tactics, but the City man more than showed what he’s got in the games he did get time (9 goals, 11 assists). Guedes had a spectacular season at Valencia, where he scored 6 and assisted 11, playing mainly as a winger or an attacking midfielder. Fast as lightning and fearless, the Portuguese super talent is one to look out for during the World Cup in Russia.

The Portuguese attack is world class, but the defense isn’t… anymore. Big names like Pepe, Bruno Alves, and Jose Fonte, are all older than 34, and the next defensive generation is not (yet) at top level. It’s probably enough to pass the group stage, but it’ll become difficult for them after that.

The favorites in Group B are Spain, who, under Julen Lopetegui, are looking for a new period of international success after most of the players from the successful 2006-2012 generation have retired. The Spanish squad is one of the strongest in the tournament, as only the likes of Germany and Brazil can match their individual quality. In goal, La Furia Roja counts on Man United’s David de Gea, who’s showing that he’s among the world’s best season after season in England. The defense is led by Spain, Real Madrid and Champions League living legend Sergio Ramos, but he’s not the only with some serious football credentials. What to think of Chelsea’s marathon man Cesar Azpilicueta, Real Madrid’s starting right-back Dani Carvajal, or FC Barcelona’s Gerard Pique?

Where it gets really crowded though, is on the Spanish midfield. Instead of commenting, just take a look at the roster: Saul Ñiguez (Atletico), Koke (Atletico), Iniesta (Barcelona), Busquets (Barcelona), Thiago (Bayern), David Silva (Man City), and Isco (Real Madrid). The likes of Cesc Fabregas and Javi Martinez were left home by Lopetegui.

In attack, Chelsea’s Diego Costa will probably be the big man for Spain, flanked by either some of the previously mentioned midfielders, or by fellow attackers Asensio and Vazquez (both Real Madrid). Costa will go to war every game and if he can combine that attitude with some goals, then the Spanish might just take it to the very end in Russia.

Spain is not only the favorite in Group B, but also one of the favorites for the World Championship. The team is bursting with quality, most players have known each other and played together at the highest level for years, and their group might be the perfect start.