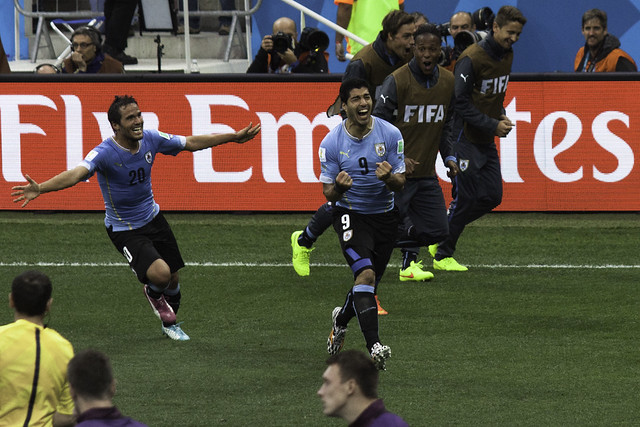 “Uruguay’s Luis Suarez during the 2014 World Cup against England” (CC by 4.0) by Jimmy Baikovicius

Over the coming two weeks, we’ll be publishing a series of World Cup previews with a special focus on each team’s best players and any details that might be of interest to FPL managers as well as those playing TFF World Cup 2018 or Dream Team World Cup 2018. We’re starting with group A with Egypt, Russia, Saudi Arabia, and Uruguay. As the tradition goes, the World Cup is kicked off by the tournament’s host. On June 14th, Russia will be opening the ball with a match against Saudi Arabia, followed by Egypt against Uruguay the day after. If you are planning on having a bet as well then look around for good odds on the World Cup in Russia. Banking the best odds on the bet you want means you get a better return if your football bet is a winner.

At the time of writing, Egypt coach Héctor Cúper is still working with a preliminary squad of 29 players, but the core of the team that’s going to Russia isn’t too hard to guess. Obviously, all Egyptian eyes will be on star man Mo Salah, after his impressive first season at Champions League finalists Liverpool. The Premier League’s Player of the Season had to leave the final against Real Madrid after half an hour due to injury, but he’s reported to be back well in time for the start of the World Cup. If his form continues into the summer, we might be talking about one of the tournament’s superstars here.

Two of Egypt’s other most experienced players also earn their wages in the Premier League. At West Brom, there is defensive strongman Ahmed Hegazi, who, despite the Potter’s relegation, can look back at a decent season. He’ll be leading the Egyptian defense for which Aston Villa’s El Mohamady usually starts as well. The other one to watch is Arsenal’s Mohamed Elneny, who doesn’t always start for the Gunners, but whose a mainstay on the Egyptian midfield. He’s crucial for the team’s balance, as well as in connecting the sturdy Egypt defense with Salah and co in attack.

In a group with Saudi Arabia and Russia, Egypt might just turn out to be one of the World Cup’s surprise packages this summer.

At the time of writing, Russia coach Stanislav Cherchesov is still working with a preliminary squad of 29 players, but like Egypt, some players are already certain of a spot among the final 23. The Russian national team hasn’t been performing great over the past few years, something that is in part due to very few Russian players being active in Europe’s top leagues at the moment.

CSKA Moscow legend Igor Akinfeev is definitely one of Russia’s best players, and probably the most important one as well. He’s been providing reliable hands in goal for more than 10 years already, and at still only 32 years old, he’ll probably do so again this summer. He’s also one of the few players with previous World Cup experience (2014) in this Russian squad.

Ex-Real Madrid talent Denis Cheryshev is one of the few players in the Russian national team who play for a team in the European top leagues, in this case Spanish side Villareal. The creative midfielder has had some injury issues over the past years, but when fit he’s one of Russia’s most decisive assets. The team’s performance will depend for a large part on his creativity. Ex-Feyenoord recruit Fyodor Smolov (currently Krasnodar) is the one who’ll have to be putting the balls in the back of the net for the Russians. The tall striker came in second in the Russian Premier League’s top scorer ranking last season, with 14 goals in 22 games.

If Russia wants to advance through the group stage for the first time, then they’ll have to make sure to take points against Egypt and especially Saudi Arabia, as Uruguay will probably be a bridge too far.

Group A’s weakest team, on paper at least, is Juan Antonio Pizzi’s Saudi Arabia. The entire squad plays in the national competition, even though, through a collaboration with Spain’s LaLiga, a group of players was loaned to a few Primera División teams to prepare for the World Cup. Considering their general lack of playing minutes though, this arrangement is unlikely to have a real effect on the team.
The 31-year old striker Mohammad El-Sahlawi, who plays for Al Nassr in Saudi Arabia, is one of the better-known players in the national team. He scored 10 goals in 19 games for his club last season and he’ll be training with Manchester United in the weeks working up to the World Cup, so it might be interesting to keep an eye out for him. Salem El-Dawsari is one of the players who were loaned to LaLiga last season. In the case of El-Dawsari, this club was Villareal, Spain’s current number 5. Despite limited playing minutes, the midfielder did spend a considerable amount of time in the ranks of one of Spain’s best clubs, so the Saudis will be hoping he’ll make a difference in Russia. Another young player who spent last season in Spain, at Levante, is winger Fahad Al-Muwallad. Short and quick, he’ll be looking to provide the Saudis with some much-needed speed and creativity in the front. Any attacking Saudi danger will probably involve Al-Muwallad.

The chances of success in Russia this summer are slim for Saudi Arabia. Group A is definitely not The World Cup’s strongest group, but we still rate the other teams considerably higher than the Saudis.

If football was played on paper, Uruguay would be qualifying for the knock-out phase without a problem. Of the four teams in Group A, La Celeste have the bigger names and the more experienced players by quite a long shot. In attack, Luis Suarez and Edinson Cavani team up to provide the goals. Though both strikers have well passed the age of 30 by now, they’re still lethal at the highest level, which is underlined by their performances for respectively Barcelona (25 goals in 33 LaLiga games) and PSG (28 goals in 32 Lige 1 games). They’ve been forming one of the most feared attacking partnerships in international football for years, so they know each others’ style inside and out. Uruguay’s performance will largely depend on the form and accuracy of these two.

Though the Uruguay squad boasts plenty of other quality players, like Inter Milan’s Matías Vecino and ex-Boro man Gastón Ramírez, we find another world class duo at the back. Diego Godín and José María Giménez form the central block at Simeone’s Atletico de Madrid as well, which is a blessing for the national team. With 9 years of age between them (32 for Godín and 23 for Giménez), they represent the past, present, and future foundation of the team, and they’ll be forming one of the most unrelenting defensive duos of the World Cup this summer.

You should never underestimate the Uruguayans. They combine world class players with a win-or-die mentality, so don’t be surprised if they reach the higher end of the knock-out stage.