Review of Gameweeks 28 and 29 in Fantasy Premier League, courtesy of Bet365

It’s been a great couple of weeks for the Merseyside clubs as Everton won 3-0 and 4-0 in home fixtures against West Brom and Hull, while Liverpool beat Burnley at home before drawing away at Manchester City. As a result the red half of Merseyside are very much in the battle to finish runners-up to runaway leaders Chelsea and the blue half have got themselves into the mix for a top 6 finish. They’re currently level on points with Arsenal, who lost for the fourth time in their last five league games to drop to sixth position.

Gameweek 28 saw just four Premier League fixtures and Everton’s 3-0 win against West Brom was easily the most comprehensive scoreline of that weekend. As a result the team of the week was dominated by Everton players, with Phil Jagielka, Ashley Williams, Kevin Mirallas, Morgan Schneiderlin, Ross Barkley and Romelu Lukaku all amongst the week’s top performers. Bournemouth’s Josh King was the star player of the week though, brushing off an early penalty miss to bag a hat trick and help himself to a haul of 18 points for the week.

In gameweek 29 there were 28 goals scored across the 10 games, and the 2 men who scored a brace each were the standout performers. Both of Romelu Lukaku’s strikes came in injury time and he’d earlier assisted Enner Valencia’s goal so ended the week with 16 points. He was just outshone by West Brom’s Craig Dawson though, with the defender scoring 17 points for his 2 goals in the 3-1 win against Arsenal. 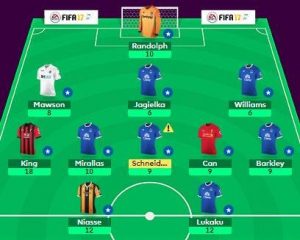 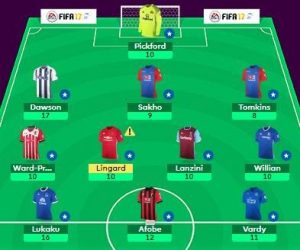 With no games this weekend due to the international break we’ll be back with a preview of the next round of fixtures late next week.