Preview of Gameweek 6 in Fantasy Premier League, courtesy of Bet365

First a Review of Gameweek 5

Man City’s Sergio Agüero was the outstanding player in Gameweek 5, helping himself to 20 points with a hat trick and an assist in their 6-0 demolition of Watford.

The Dream Team of the Week lined up in a 3-5-2 formation. Swansea’s Lucas Fabianski (£4.5m) was the standout goalkeeper with 11 points, and the back three were made of up of players from Man City and Man United; Valencia, Otamendi and Walker scored 37 points between them (although at £18.5m they’d have taken up a considerable amount of your budget!). In midfield Scott Arfield, Steven Davis and Andrew Surman were all available at £5m or less and scored a goal each, while Matt Ritchie (£5.9m) and David Silva (£8.2m) assisted twice each to help the midfield’s points total reach 53. Up front Agüero was joined by Romelu Lukaku, with the front two scoring 4 and assisting 2 between them last weekend. 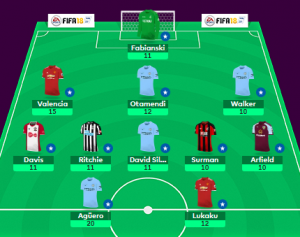 The first game this weekend sees West Ham host Tottenham at lunchtime on Saturday. Spurs have lost just 2 of their last 18 league games, but one of those defeats was a 1-0 loss here in May that effectively ended their title hopes for the season. They’ll be keen to avoid a repeat of that scoreline and they’ve started well in away games this season, winning two from two and scoring five goals in those games without reply. With that in mind Kieran Tripper (£5.4m) could be a good option in defence; it seems that Pochettino is opting for 3 at the back this season and with Tripper playing the full 90 minutes at wing-back in each of their last 4 league games he’s got potential to pick up points at both ends of the pitch. Harry Kane (£12.5m), who has scored 5 times in his last 5 appearances against West Ham, is worth consideration as captain too.

In the 3pm kick-offs there’s one match in which you’re spoilt for choice when looking for Fantasy Football picks. Manchester City host Crystal Palace, and the two sides’ form could not be further apart. City are top of the league with 13 points and a goal difference of +14, while Palace are rooted to the bottom with 5 defeats from 5 and no goals scored. Man City have been victorious in each of the last 6 meetings between the two and at the Etihad have beaten Palace by an aggregate score of 14-1 in the last 3 games. It’s hard to ignore Sergio Agüero (£11.6m) here, with the Argentine scoring 122 Premier League goals in his 6 previous seasons in England, and adding another 5 already in this campaign. Other notable picks for City this week are Gabriel Jesus (£10.5m) and Raheem Sterling (£7.8m), who have both scored in each of their last 3 league appearances, David Silva (£8.3m), who has assisted 5 in 5 in the league, and Kyle Walker (£6.5m), who has played the full 90 minutes in each of City’s Premier League clean sheets this season and has assisted goals in each of his last two.

Liverpool travel to Leicester for the evening kick-off on Saturday, in a repeat of Tuesday night’s EFL Cup tie that was won convincingly by the home side, Leicester. The Foxes have beaten Liverpool on each of their last 3 visits to the King Power Stadium now and will be looking to capitalise on the Reds’ vulnerability at the back. Jamie Vardy (£8.5m) could be a shrewd pick if he shakes off his groin injury in time – the England man has scored in both of Leicester’s last 2 league games and has scored a brace in each of his last 2 appearances here against Saturday’s opponents. The away side will be dangerous in attack though, and Mo Salah (£9.2m) will be looking to continue his impressive start to his Liverpool career, where he’s scored 5 goals from 7 starts in all competitions.

To finish off, one pick from each of the remaining fixtures:

Best of luck for this weekend, and we’ll be back with another update next week.