Preview of Gameweek 5 in Fantasy Premier League, courtesy of Bet365

Brighton’s Pascal Groß was the outstanding player in Gameweek 4, with the midfielder picking up 18 points from his two goals and one assist in their 3-1 win against West Brom.

The Dream Team of the Week lined up in a 3-4-3 formation. Newcastle’s Rob Elliott (£4.0m) was the standout goalkeeper with 8 points, and his teammate Jamaal Lascelles (£4.5m) the star defender with 15. They were joined in the defensive positions by Spurs’ Ben Davies (£5.7m) and Watford’s Kiko Femenía (£4.5m). A cut-price midfield of Groß, Choupo-Moting, Sané and Obiang would have earned you 57 points this week, while up front some more familiar names in Welbeck, Kane and Jesus (combined cost £30.3m) scored 41 points between them. 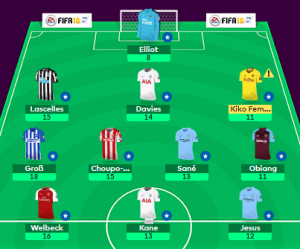 First point to note for gameweek 5 is the Friday night fixture, meaning that the deadline for transfers and team selection is 7pm tomorrow evening – don’t forget to update your team prior to this!

There are a couple of standout fixtures on Saturday that offer tempting captain choices, the first of which is Liverpool’s home clash with Burnley at 3pm. Liverpool may have succumbed to an embarrassing 5-0 defeat at Man City in their last league game, but they played almost an hour of that match with 10 men and were well in contention before Sadio Mané’s dismissal. They’ve only lost 2 of their last 29 league games at Anfield and are up against a side who picked up just 7 points on their travels in the whole of last season. Roberto Firmino (£8.6m) and Mo Salah (£9.1m) are the two players who are well worth considering for captain here. They’ve each scored two and assisted two from their 4 league games so far, and both were on the scoresheet in last night’s 2-2 Champions League draw with Sevilla. It’s also worth noting that Philippe Coutinho (£8.8m) came off the bench in that game and after a summer of speculation surrounding his future he’ll be looking to recapture the form that saw him pick up 171 Fantasy Football points last season, including 13 goals and 8 assists.

The late kick-off on Saturday is Tottenham v Swansea, and it’s a game in which Spurs will be desperate to pick up 3 points. They were impressive victors in the Champions League last night against Dortmund, and that win should help to allay any nerves they have at Wembley after a stuttering start to the league season in which they’ve dropped 5 points from their first 2 ‘home’ games (after dropping just 4 points at White Hart Lane in the whole of last season). Harry Kane (£12.4m) scored twice in their 3-1 win last night, he got a brace last week at Everton and he did so in this fixture last season too, so it’s likely that a huge percentage of Fantasy Football managers will be giving him the nod for captain this week.

The final game of the weekend is the clash between Manchester United and Everton at Old Trafford. All eyes will be on the centre forwards in this one after Romelu Lukaku (£11.7m) and Wayne Rooney (£7.5m) switched clubs in the summer. Both have started the season well, with Rooney scoring both of Everton’s league goals to date and Lukaku scoring 4 in 4 for United. It’s Lukaku who’s likely to come out on top here though, bearing in mind Everton’s miserable record at Old Trafford where they’ve won just once in their last 24 visits. It’s also worth noting that United have kept clean sheets in each of their last 4 home games, and with Everton failing to find the net in their last 2 matches the likes of David de Gea (£5.5m) and Eric Bailly (£6.2m) should provide good points potential this week. Those of you with Paul Pogba (£8.3m) in your team need to be looking to transfer him out – he came off with a hamstring injury after just 19 minutes of Tuesday’s Champions League game on Tuesday and is not expected to be fit for a month.

To finish off, one pick from each of the remaining fixtures:

Best of luck for this weekend, and we’ll be back with another update next week.