Preview of Gameweek 4 in Fantasy Premier League, courtesy of Bet365

Newcastle’s Ciaran Clark was the outstanding player in Gameweek 3, with the centre back scoring Newcastle’s second in their 3-0 win against a poor West Ham side. The goal and clean sheet, alongside three bonus points, earned him 15 points.

The Dream Team of the Week lined up in a 5-3-2 formation, with Clark joined at the back by Newcastle colleague Chancel Mbemba, Brighton’s Shane Duffy, Joe Gomez of Liverpool and Swansea’s Kyle Naughton. Those 5 prove that there are Fantasy Football bargains aplenty, with just £22m of your budget needed for all five of them. Fraser Forster was the pick of the goalkeepers, scoring 11 points to take his tally for the season to 20, while in midfield a combination of Fàbregas, Salah and Alli would have returned 21 points for a combined cost of £25.4m. Up front Chelsea’s Alvaro Morata and Liverpool’s Roberto Firmino got a goal and an assist each to score 12 points. 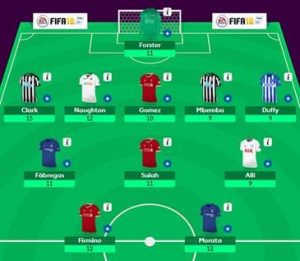 Following the international break the Premier League is back with a huge game as Man City host Liverpool at lunchtime on Saturday. The two sides have a devastating array of attacking talent and history suggests that there’ll be goals at each end, with both teams scoring in all of the last 5 Premier League meetings between them at the Etihad, and 18 goals scored altogether in these 5 games. For the away side Roberto Firmino (£8.6m) has started the season in excellent form, with 2 goals and 2 assists from his 3 games so far helping him to 26 Fantasy Football points. Midfielders Sadio Mané (£9.6m) and Mo Salah (£9.0m) are also racking up the points, with Mané on the scoresheet in each of Liverpool’s three games and Salah equalling Firmino’s contribution with 2 goals and 2 assists. Any of these players would be worthy additions to your Fantasy team. City’s Gabriel Jesus (£10.4m) scored his first goal of the campaign last time out against Bournemouth and should cause the Liverpool defence plenty of problems on Saturday. In midfield David Silva (£8.1m) has 2 assists to his name already and is surely one of the few guaranteed his place in City’s midfield with Guardiola having a plethora of options to choose from.

At 3pm Tottenham travel to Goodison Park to face Everton, a team who haven’t yet beaten them under Mauricio Pochettino’s management. The Argentine has overseen 3 wins and 3 draws against the Toffees and Spurs may well be happy to playing an away game to avoid any further talk of the Wembley hoodoo. Harry Kane (£12.4m) has yet to find the net for Tottenham this season, but August is a well-documented anomaly in his goalscoring record. He got on the scoresheet for England last week (on 1st September!) and he scored twice the last time these two sides met, so should be confident going into this one. Dele Alli (£9.5m) is another to look out for, with the midfielder scoring in two of his last three appearances against Everton, and in two of his three Premier League appearances for far this season.

The late kick-off sees Manchester United take their 100% record to the bet365 Stadium as they face a Stoke City side who’ve started the season solidly enough, losing narrowly at Everton on the opening day before beating Arsenal and drawing at West Brom. United are a different proposition to those three at the moment though, with Mkhitaryan (£8.3m), Pogba (£8.2m) and Lukaku (£11.7m) looking particularly sharp in the opening weeks. Between the three of them they have 5 goals and 7 assists, and it’s difficult to see a Stoke defence who’ve kept just 3 clean sheets from their last 13 league games keeping them at bay. It’s worth noting that United have failed to keep a clean sheet on any of their last 4 visits to Stoke though, so despite their strong defensive showing so far this season it may be wise to avoid their defenders in your starting XI this week.

To finish off, one pick from each of the remaining gameweek 4 fixtures: