Preview of Gameweek 38 in Fantasy Premier League -
Skip to content

Preview of Gameweek 38 in Fantasy Premier League, courtesy of Bet365

Chelsea secured the title with a 1-0 win at West Brom and followed that up with another victory in a 4-3 thriller at home to Watford, a game in which club legend John Terry opened the scoring for the Blues. Tottenham are confirmed as runners up and have had an impressive week, winning 2-1 against Manchester United in their final game at White Hart Lane before travelling to last season’s champions and thumping them 6-1, with Harry Kane now in prime position to win the Golden Boot after his 4-goal showing last night. At the bottom Hull City’s hopes of staying in the league were torn to shreds as they were hammered 4-0 at Crystal Palace, so they join Middlesbrough and Sunderland in next season’s Championship, capping a miserable year for top flight football in the north-east.

With plenty of double gameweeks it was always going to be a high-scoring total for the Dream Team this week, and the Dream XI racked up a massive 213 points. In goal Sergio Romero scored 16 points in just 1 match after saving a penalty and keeping a clean sheet in Man United’s 15th draw of the season at Southampton. César Azpilicueta was the star defender with 20 points, thanks to a clean sheet and an assist in Chelsea’s first game of the week and a goal in their second. Arsenal’s Alexis Sánchez was the standout performer in midfield, with his goal and assist at Stoke followed up by a brace at home to Sunderland, taking him to 27 points for the week. Up front an incredible 31 points for Harry Kane secured him the title of Top Player of the Week, scoring the winner in Tottenham’s game against Man United and bagging 4 times and assisting 1 last night against Leicester. 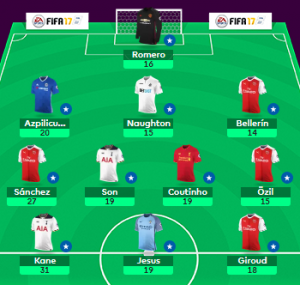 All games kick off at 3pm on Sunday this week so transfer deadline is 2pm on that day. The final game of the season is always hard to predict as with lots of league positions already confirmed there’s not the intensity of a normal Premier League weekend. It’s the teams who do have a vital position to play for who should be looked to for Fantasy Football picks, and there are a few of those despite the champions already being decided and the relegation spots confirmed.

Arsenal are on the verge of their lowest-ever league finish under Arsène Wenger unless they can record a victory against Everton and other results go their way. They’re sure to be at full strength as they go all out to try to secure Champions League qualification and it could be a shrewd move to bolster your attack with Olivier Giroud (£8.1m). The Frenchman scored a hat-trick on the final day of last season and has 3 goals and an assist from his last 3 appearances. In midfield Alexis Sánchez (£11.6m) and Mesut Özil (£9.5m) are worth consideration, with each thriving in Wenger’s new formation. In fact, in the Gunners’ last three matches Giroud, Sánchez and Özil have scored all 8 of the team’s goals and also claimed 4 of the assists between them.

Liverpool are one of the sides who can prevent Arsenal from that Champions League qualification spot; they head into their game at home to Middlesbrough knowing that a win will mean they’re in European football’s most prestigious competition next year. They were comfortable 3-0 victors in the reverse fixture earlier this season and should be too strong and too motivated for a Middlesbrough team who are already relegated. Philippe Coutinho (£8.6m) is the man in form for Liverpool, scoring 6 goals and assisting 2 in their last 8 matches. Daniel Sturridge (£9.6m) will provide a goalscoring threat up front too and can be expected to start following a goal and impressive all-round performance against West Ham last week. At the back 4 clean sheets in their last 5 matches for the Reds means that their defenders cannot be ignored against the side who’ve scored the fewest goals in the top flight this season. Dejan Lovren (£4.8m) appears to be the best value pick here.

Manchester City know that a draw is enough to guarantee them a top 4 finish and a win would ensure that they can’t be overtaken in third. They’re up against a Watford team who have lost 5 games in a row so should be an ideal opponent in this situation. Gabriel Jesus (£9.0m) has been restricted to just 6 starts since joining the club in January due to injury, but has made a massive impact with 6 goals and 2 assists from those 6 starts. He’ll surely get the nod up front this weekend and will be looking to add to that tally. Kevin De Bruyne (£10.5m) is also in fantastic form for City, getting the maximum 3 Fantasy Football bonus points in 3 of their last 6 games, scoring twice and assisting 6 in those games.

There’s no pressure involved in Chelsea’s home game against Sunderland, but the stage may well be set for John Terry (£5.2m) to score his second goal in a week in his final appearance for the club. The Stamford Bridge faithful will be giving him an emotional send-off and his goal against Watford ensured that he has been on the scoresheet in 17 consecutive seasons. Few defenders have scored more than him in the Premier League and against a torrid Sunderland defence he’ll be a big threat at set pieces. He could well pick up clean sheet points too, with Sunderland’s woes not restricted to defending; they’ve only scored in 2 of their last 13 matches.

Good luck for the final gameweek.