Preview of Gameweek 36 in Fantasy Premier League -
Skip to content

Preview of Gameweek 36 in Fantasy Premier League, courtesy of Bet365

First a Gameweeks 34 and 35 Review

Chelsea appear to be strolling to the title with two comfortable victories secured in the past two weeks to help to maintain their 4-point cushion at the top of the table. Spurs are the only team putting any sort of pressure on them and they stretched their winning run to 9 league games with wins against Crystal Palace and Arsenal. The battle for the remaining Champions League spots is set to go down to the wire though, with Liverpool losing 1 game and winning their other in the past 2 weeks, Man City drawing twice and Man United drawing twice and winning once as they made up a game in hand.

The Dream Team from gameweek 34 featured the Man United goalkeeper and three of their defenders, with their double gameweek bringing 2 clean sheets. In gameweek 35 it was again defensive players who shone the most, with Hull’s Eldin Jakupovic racking up 14 points from his clean sheet and penalty save against Southampton, and Chelsea’s Gary Cahill matched that tally with his goal and clean sheet against Everton. 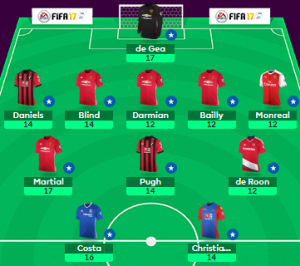 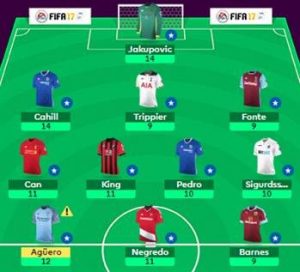 We have a Friday night fixture this week with West Ham hosting Tottenham at 8pm, so make sure to change your Fantasy Football team prior to the 7pm deadline!

There’s a double gameweek for Arsenal, which makes Alexis Sánchez (£11.5m) a must-have this week. They have a home game against Manchester United followed by a trip to Southampton, and both are games in which Arsenal can be expected to find the back of the net. They’ve scored in 10 of their last 11 home fixtures against Manchester United and they won 5-0 at Southampton earlier in the season in the FA Cup. Sánchez assisted twice in that game despite only playing the last 25 minutes, and he’s been their main attacking threat all season. He’s actually the best-performing player in the whole of the league in terms of Fantasy Football points with 214, and with two games on the cards he’s the standout captain choice.

Saturday’s early kick-off sees Manchester City up against Crystal Palace, a side against which they have an excellent recent record. They’ve won each of the last 5 meetings between the two, scoring 15 times and conceding twice. They’ve also won all of their last 7 home games against Palace, a run stretching back to 1999. Man City’s two main strikers, Sergio Agüero (£12.8m) and Gabriel Jesus (£8.7m), are the tempting picks in this one. The two started together last week and each grabbed a goal in the 2-2 draw with Middlesbrough. Jesus now has 4 goals from the 3 full games he’s played in the Premier League, and Agüero has scored in 7 of his last 9 league matches.

In the 3pm kick-offs there could be some bargain buys from the Hull v Sunderland game. Hull have kept clean sheets in successive matches and have an impressive home record, winning 8 and drawing 1 of their last 9 games in all competitions at the KCOM Stadium. That run should continue on Saturday when they come up against Sunderland, whose relegation was confirmed last weekend. They’ve failed to score in 9 of their last 10 matches, have lost 10 of their last 11 away and are the joint-lowest scoring team in the league with just 26 all season. Hull’s defensive players should therefore be solid investments this week, especially goalkeeper Eldin Jakupovic (£4.1m), who has saved two penalties this season, and defender Harry Maguire (£4.4m), who has chipped in at the other end recently too with 2 goals from his last 4 appearances.

Monday night’s game between Chelsea and Middlesbrough will in all likelihood see Middlesbrough become the second team to be relegated to the Championship. If as expected Hull City get any sort of positive result at home to Sunderland then Middlesbrough will need to win at the home of the champions-elect to avoid that relegation being confirmed, and that’s a big ask for a team who’ve won just once away in any competition all season (and even that was against Sunderland in their very first away game of the campaign). Chelsea will be looking to secure 3 points that will inch them even closer to the title and Eden Hazard (£10.5m) is the man they’ll look to for inspiration. He’s been consistently brilliant this season and has 13 goals and 8 assists from his last 25 league appearances.