Preview of Gameweek 34 in Fantasy Premier League -
Skip to content

Preview of Gameweek 34 in Fantasy Premier League, courtesy of Bet365

First a Look Back at Gameweek 33

Tottenham Hotspur secured a second successive 4-0 home win to move to within 4 points of Chelsea at the top after the leaders were soundly beaten 2-0 at Manchester United. They were the only team in the top 7 to lose, so there were no other significant changes in the table last week.

The Dream Team this week lined up in a 4-5-1 formation, with Harry Kane taking up the striking position after scoring and assisting on his return to the Spurs side. He picked up 12 points, but that wasn’t enough to eclipse Man City’s Vincent Kompany as the player of the week. The Man City captain scored and helped his team to a clean sheet in a 3-0 win at Southampton to end the week on 14 points. There were also notable performances from Ander Herrera and Xherdan Shaqiri in midfield, with 13 points apiece. 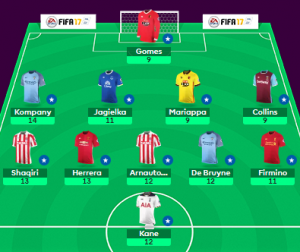 With 6 games over the weekend followed by a further 5 in midweek we have three teams (Manchester United, Crystal Palace and Middlesbrough) with a double gameweek while West Brom have no fixture at all.

Manchester United’s two games may both be difficult away fixtures on paper, but it’s still impossible to ignore Zlatan Ibrahimovic (£11.4m) for a double gameweek. He’s scored 9 goals in his last 8 away appearances in the Premier League so there’s no reason to think that he won’t be on the scoresheet in these games. A lot is made of Burnley’s home form but Liverpool are the only top 6 side they’ve beaten there this season so United should go into this game confident of picking up 3 points that could be vital in their push for the top 4, particularly if they follow that up with victory at the Etihad Stadium on Thursday. In order to achieve this they’ll need Ibrahimovic to be at the top of his game, particularly if Sergio Agüero (£12.8m) can keep up his Manchester Derby goalscoring record; the Argentinian frontman has scored 6 goals in his last 6 starts against United.

Of those with a double gameweek it’s Middlesbrough who have the most inviting fixtures with a trip to Bournemouth followed by a home game against Sunderland. They may be struggling near the bottom of the table but they boast the best defensive record of anyone outside of the top 7. That home game against bottom of the table Sunderland therefore provides them with clean sheet potential, so the returning Calum Chambers (£4.3m) could score good points at a bargain price. For similar reasons Brad Guzan (£4.2m) could be worth a look in goal as he’s set to deputise for the injured Víctor Valdés (£4.6m).

Another team who could provide you with some points-scoring potential at low cost are Hull City. Considering their league position they have an incredible home record, winning 7 of their last 8 in all competitions and losing just 1 of their last 14. They face a Watford side with little to play for and dismal away form, losing 9 of their last 11 and conceding 25 goals in the process. Defender Harry Maguire (£4.4m) has scored in each of his last 2 Premier League appearances while striker Oumar Niasse (£5.6m) has been a huge signing for them, scoring in home victories against Liverpool, Swansea and Middlesbrough. Both could be shrewd purchases this week.