Preview of Gameweek 33 in Fantasy Premier League -
Skip to content

Preview of Gameweek 33 in Fantasy Premier League, courtesy of Bet365

First a review of Gameweek 32

Tottenham destroyed Watford in the early kick-off to put some pressure on Chelsea, but the leaders responded in fine fashion with a comfortable win at Bournemouth. Liverpool and Man City also won so there’s no change at all in the top 4 this week but Man United’s 3-0 win moves them into fifth above Arsenal, who suffered a humiliating 3-0 defeat at Crystal Palace.

The Dream Team this week lined up in a 3-5-2 formation, with Tottenham’s Heung-Min Son the star player as he helped himself to two goals and an assist against Watford. Luke Shaw and Kieran Tripper, two full backs who have struggled to get game time for their clubs this season, both started and impressed with clean sheet points and an assist each in the bag. 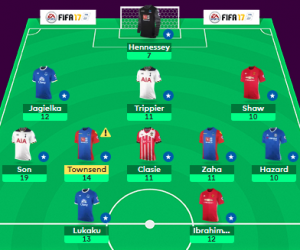 White Hart Lane hosts the opening fixture of the weekend for the second successive week, with Tottenham hosting Bournemouth in the early kick-off on Saturday. Earlier in the season the two sides played out a goalless draw in a lunchtime kick-off at the Vitality Stadium, but that’s unlikely to be repeated with Spurs in irrepressible form at the moment. They’ve won 6 in a row in the league and have won each of their last 14 fixtures in all competitions at White Hart Lane, racking up 46 goals in the process. They put 8 past Bournemouth in the 2 fixtures between the sides last season, with Harry Kane (£11.3m) bagging 5 of those. The England man got 30 minutes under his belt last week after an injury lay-off and he’ll surely be in the starting line-up on Saturday in place of the misfiring Vincent Janssen. If he scores he’ll have reached 20 league goals for the third season running and he’ll no doubt have the Golden Boot in his sights if he can remain injury-free for the rest of the campaign.

Later in the day Romelu Lukaku (£10.4m), the man who currently leads that race for the Golden Boot, also has an inviting fixture. His Everton side are at home to Burnley, who have picked up just 4 points away from home all season. Everton have scored 26 goals in their last 7 league games at Goodison, with Lukaku on the scoresheet 12 times and assisting a further 3. He’s likely to add to that tally on Saturday and should be a serious consideration when choosing your captain this week.

If you’re looking for some players with points-scoring potential at low prices this week you could do worse than looking to Stoke City’s goalkeeper and defenders. They’re at home to Hull City, the league’s lowest scorers away from home with just 8 in 16 games. On top of this, Stoke have a decent defensive record against the league’s lesser teams, keeping clean sheets in 6 of their 9 games at the bet365 Stadium against those outside of the top 8. With this in mind Lee Grant (£4.4m), Erik Pieters (£4.7m) and Bruno Martins Indi (£4.9m) are all viable options.

There’s a huge game on Sunday with champions-elect Chelsea travelling to Old Trafford to face former boss José Mourinho. This game is unlikely to see many goals, with Man United’s home record against fellow members of the top 8 this season reading 1 win, 4 draws and 1 defeat. They’ve scored 5 and conceded 5 in these 6 fixtures, so a low-scoring draw is the most likely outcome. Defensive players who pose a goal threat may therefore be the best option here, and it’s Chelsea’s Marcos Alonso (£6.8m) and Gary Cahill (£6.6m) who stand out with 9 league goals between them this season.