Preview of Gameweek 32 in Fantasy Premier League -
Skip to content

Preview of Gameweek 32 in Fantasy Premier League, courtesy of Bet365

Chelsea dispatched Manchester City in impressive fashion on Wednesday night to remain seven points clear at the top of the Premier League table, but Tottenham mounted an impressive comeback against an unlucky Swansea side to win 3-1 and maintain some pressure on the Blues as we enter the final few weeks of the football season.

The Dream Team this week lined up in a 3-4-3 formation, with lots of goals and some impressive individual performances from the likes of Eden Hazard and Dele Alli. The best player this week was Hull City’s Abel Hernandez, who was instrumental in the Tigers’ 4-2 demolishing of Middlesbrough, scoring a goal himself and providing the assists for two more. 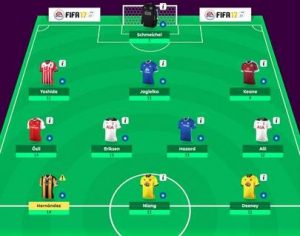 Tottenham welcome Watford to White Hart Lane in the early kick off on Saturday and the expectation is that Spurs will dispatch the Wasps with ease in their attempts to catch up to Chelsea in the title race. Spurs famously finished third in the two-horse race last season thanks to their implosion against a 10 man relegated Newcastle side, but Mauricio Pochettino has performed strongly in the league this season despite embarrassing early exits from European competitions. Dele Alli (£9.0m) is the form player for Spurs at the moment, scoring four goals in his last five matches, whilst Christian Eriksen (£8.8m) has impressed in recent weeks with two goals in his last three league games.

Chelsea travel to the south coast for the late kick off of the weekend against Bournemouth and the expectation is that the Blues will come away with all three points as they look to hang onto their lead heading into the last leg of the Premier League season. Brazilian gone Spanish frontman Diego Costa (£10.6m) has been out of form in recent weeks, failing to find the back of the net in his last three league games, but he may well score on Saturday against a team well known for its defensive frailties. Man of the moment Eden Hazard (£10.2m) is also likely to be a good source of fantasy points this weekend as speculation continues to build around the Belgian star’s future, with Real Madrid thought to be interested in securing his services this summer. Eddie Howe will be looking to Josh King (£5.8m) to get something out of the game for the Cherries, and with six goals in his last six games, the young Norwegian is probably the most likely to score for Bournemouth on Saturday.

Sunday sees Jose Mourinho’s Manchester United travel to face David Moyes’ Sunderland team with both managers face increasing pressure towards the end of the season in the face of relative failure for their respective clubs. Having served his three game ban, Zlatan Ibrahimovic (£11.4m) returned to the side against Everton on Tuesday and scored a penalty deep into stoppage time to rescue a point for the Red Devils, and the Swede is most likely to score for United with the side’s other attacking players struggling for form. A United clean sheet isn’t out of the question considering the Black Cats’ wretched form, so David de Gea (£5.4m) could provide managers with some all-important clean sheet points and Antonio Valencia (£6.0m) could also be a shrewd acquisition given his much improved form this season.