Preview of Gameweek 31 in Fantasy Premier League -
Skip to content

Preview of Gameweek 31 in Fantasy Premier League, courtesy of Bet365

A shock defeat for Chelsea gave the chasing pack a glimmer of hope, and it’s Tottenham and Liverpool who profited the most with victories against Burnley and Everton respectively.

The Fantasy Football Dream Team lined up in a defensive 5-41 formation, emphasising the lack of goals over the weekend in the Premier League (just 19 scored in 10 matches). Star men were Watford defender Miguel Britos, who scored the only goal in their 1-0 win against Sunderland, and Leicester defender Danny Simpson, who assisted both goals in the 2-0 win against Stoke 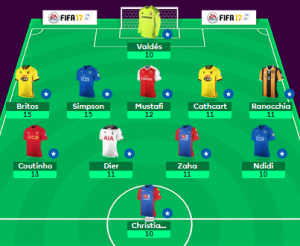 Amongst the four fixtures tonight we have last season’s champions Leicester at home to Sunderland. The Foxes have turned their form around since dismissing manager Claudio Ranieri, with 5 successive wins in all competitions. They should be able to carry on this run against a poor Sunderland side who are rooted to the foot of the table and 8 points from safety. Jamie Vardy (£10.0m) has 4 goals and 2 assists from the four league games played under new boss Craig Shakespeare and can be relied upon to further improve that tally tonight.

Also tonight Manchester United are at home to Everton in a game that they’ll be desperate to win to try and keep pace with the top 4. Their unbeaten run continued against West Brom at the weekend, but that’s little consolation from a disappointing goalless draw and more dropped points at Old Trafford. They’ve drawn over half of their 15 league games at home this season and have scored just 20 times in those. To put that in perspective it’s a lower home goals total than each of Hull City, Swansea City, Burnley and Watford have managed so far in this campaign. They’re solid at the back though, with only Tottenham boasting a better defensive record, so Antonio Valencia (£6.0m) may be the best option here. He’s picked up 44 points from his last 6 appearances, including 4 clean sheets, a goal and 2 assists.

The game to look out for tomorrow is undoubtedly Chelsea v Man City. If City can pick up the three points here then it’d be back to back home defeats for Chelsea and suddenly we’d have every chance of a title race on our hands again. City have won 10 of their last 15 away in the league and boast the likes of Sergio Agüero (£12.7m), Leroy Sané (£7.5m) and Kevin De Bruyne (£10.4m) so they’re more than capable of doing this. It should be an open game and if Cesc Fàbregas (£6.9m) starts for Chelsea he’ll relish exploiting the space left by City’s attack-minded midfield. He’s scored in each of Chelsea’s last 3 home games in the league and has 4 goals and 9 assists from just 849 league minutes this season, meaning he’s scored or set up a goal every 65 minutes. He also seems to have forced his way into Antonio Conte’s plans, starting 3 of their last 4 fixtures in the Premier League, so could be a crucial player over the remainder of the Fantasy Football season.

Best of luck for the midweek fixtures, and we’ll bring you another update later in the week