Preview of Gameweek 3 in Fantasy Premier League, courtesy of Bet365

There were a host of excellent performances during gameweek 2, with Chelsea’s Marcos Alonso scoring 2 goals in a close game between Chelsea and Spurs in their first home game at Wembley. The national stadium did the Lilywhites no favours but there is no doubt that Chelsea were the better team on the day, overcoming a Michy Batshuayi own goal in the first half to win 2-1 thanks to the Spanish wingback’s superbly taken goals.

The Dream Team lined up in a defensive 4-5-1 formation, with Jack Butland putting in an inspired performance to keep a dogged Arsenal from scoring against the Potters, whilst Huddersfield’s Christopher Schindler had an excellent game for the Terriers against a woeful Newcastle side.

Former Manchester United striker Javier Hernandez opened his account for a 10-man West Ham side against Southampton over the weekend, scoring twice against the Saints, but it wasn’t enough to overcome Southampton, who won a penalty late on to secure all 3 points. 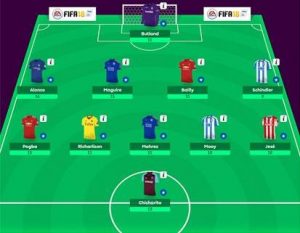 There’s a host of excellent games to look forward to this weekend, starting with Saturday’s early kick off, as Manchester City travel to Bournemouth in search of their second away win of the season. Fantasy managers will have been frustrated by City’s attacking players thus far, particularly against Everton on Monday when City were denied despite myriad chances. With that said, Bournemouth have been poor in their opening 2 fixtures, and most will be predicting a comfortable City win here. Kevin de Bruyne (£10.0m) looks a good pick for this match and an underperforming Bournemouth could be just what the Belgian needs to open his account for the 2017/18 season.

Saturday evening sees an in-form Manchester United side hosting one-time Champions Leicester City in what is likely to be the first real test of the Red Devil’s title credentials, but there are an array of fantasy talents that will appeal to fantasy managers – Belgian striker Romelu Lukaku has been in red hot form, netting three goals in two games so far and he’s showing no signs of slowing down. Midfielder Paul Pogba (£8.1m) has also found the net on two occasions already, whilst Henrikh Mkhitaryan (£8.2m) has chipped in with four assists in his first two games of the season.

There are some great matches being played out on Sunday too, with Spurs home-away-from-home fixture against Burnley kicking off at 1:30pm. The North West outfit should prove not so stern a test for Spurs as trying to keep Chelsea out in their second game at Wembley, and the likes of Dele Alli (£9.5m) and Christian Eriksen (£9.6m) are both appealing fantasy prospects for the weekend. Spurs could well keep their second clean sheet of the season against Burnley too, who endured a truly awful away record to hang on to Premier League status last season, making Ben Davies (£5.6m) a tempting prospect for defensive returns as well as attacking output.

To finish off, one pick from each of the remaining gameweek 3 fixtures:

Best of luck for the coming weekend!