Preview of Gameweek 2 in Fantasy Premier League, courtesy of Bet365

West Brom’s Ahmed El-Sayed Hegazi was the outstanding player in Gameweek 1, with the centre back scoring a debut goal to secure a 1-0 home victory against Bournemouth. The goal and clean sheet, alongside three bonus points, earned him 15 points this week. Tottenham’s Ben Davies also picked up points for a goal and clean sheet, but his yellow card mean he has one point fewer than Hegazi.

The Dream Team of the Week lined up in a 3-4-3 formation, with Hegazi and Davies joined at the back by Huddersfield centre back Zanka and goalkeeper Lössl, 4 players who would have only cost you a combined £19m. In midfield, Eriksen, Mkhitaryan, Salah and Xhaka were all directly involved in 2 goals each to score a combined 44 points (at a cost of £32m), and up front Vokes, Vardy and Lukaku scored 13 points apiece (for £26m combined) with each getting on the scoresheet twice. 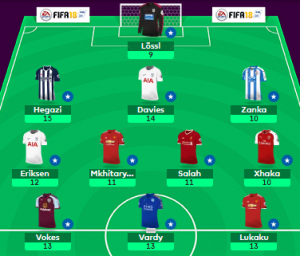 Gameweek 2 gets underway at lunchtime on Saturday with Swansea City hosting Manchester United. The hosts here picked up a creditable 0-0 draw at Southampton in their opener while United started the season impressively with a 4-0 victory against West Ham. The clean sheets for both teams in those games may be misleading for this fixture though, with both teams finding the net in each of the last six meetings between the sides. Romelu Lukaku (£11.6m) looks the obvious pick here, although Anthony Martial (£8.0m) could be a potential midfield purchase, with his 10-minute appearance on Sunday (a substitute for the impressive Rashford) bringing a goal and assist and putting him well in contention for a starting spot this week. For the home side, Tom Carroll (£4.5m) is worth consideration at a bargain price, especially considering his likely deployment on free kicks and corners following the departure of Gylfi Sigurdsson to Everton.

Tottenham v Chelsea is undoubtedly the biggest game of the weekend, as last season’s top 2 go head to head early in this campaign. Chelsea started the season in horrendous fashion with a 3-2 home defeat to Burnley and red cards for Gary Cahill (£6.4m) and Cesc Fàbregas (£6.9m) mean that they’ll be suspended for Sunday’s clash. With Eden Hazard (£10.5m), Pedro (£8.0m) and Tiemoué Bakayoko (£5.0m) all ruled out as well through injury Tottenham should be confident of taking three points in their first ‘home’ game of the season at Wembley. Dele Alli (£9.5m) scored the opener in Spurs’ 2-0 victory against Newcastle last weekend and bagged both goals as they ran out 2-0 winners in this fixture last season, so is the man to look to for Fantasy Football points in this one.

The first Monday night game of the season sees Manchester City host Everton at the Etihad. City are undefeated in their last 12 Premier League home games while Everton have failed to win any of their last 8 away, so it’s difficult to make a case for the away side getting much here and they will have played a Europa League qualifier on Thursday evening. Sergio Agüero (£11.5m) and Gabriel Jesus (£10.5m) started up front together on Saturday and will be expected to do so again in this game, with either (or both) providing a real goal threat for your Fantasy team. David Silva (£8.0m) was sublime in the 2-0 victory against Brighton and despite stiff competition for starting spots in the City midfield he surely can’t be dropped in this kind of form.

To finish off, one pick from each of the remaining gameweek 2 fixtures:

Best of luck for the coming weekend!