Manchester City Players - Who to Pick for your Fantasy Team? -
Skip to content 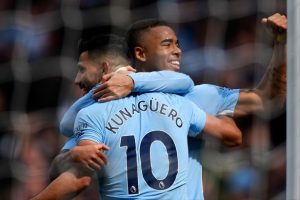 Charts for fantasy football’s leading points scorers are predictably dominated by Man City players at present as Pep Guardiola’s men have made a sensational start to the season. They have scored more goals at this stage of the season than any top flight since the Victorian era and show no signs of slowing down. But the big question is, which of their players should you pick for your team?

It is not as easy as it sounds, because Guardiola likes to rotate his forwards and your selection could end up sitting out an entire game. City players come with hefty price tags, so that is a costly burden to shoulder. There are only three positions in the City attack and they have five top forwards vying for a starting berth: Sergio Aguero, Gabriel Jesus, Leroy Sane, Raheem Sterling and Bernardo Silva.

At the start of the campaign, everyone thought Aguero and Gabriel would be forced to fight for a centre forward role, but instead Guardiola has played them together for large parts of the season. However, Gabriel sometimes drops to the bench and has started only seven of nine games. Aguero, now Man City’s record goal scorer, is more likely to nail down a place in the starting 11 but he is often blighted by injury and he has started just six out of nine games.

Sterling and Sane have both been brilliant when they have played, scoring six and five goals respectively, but if Gabriel and Aguero both start there is only room for one of them. Throw £45 million signing Bernardo into the mix and competition is fierce, so Sterling and Sane have only started five games apiece. It is therefore risky to put either of them into your fantasy team, as you never know which one Guardiola will go for as the Citizens are competing on all fronts and he needs to rotate his squad. They will become more attractive if a couple of forwards are injured and Guardiola has no choice but to play them in consecutive games, but right now it is hard to justify selecting either one.

Right now the City forward that merits consideration for your team is Aguero. But given his injury history and his huge price tag, it is arguably better to go for Tottenham’s Harry Kane and make the England striker your captain. Kane is banging in goals left, right and centre, against the big teams and the small ones, and it is hard to ignore him right now.

That frees you up to go for City’s magnificent midfielders. Guardiola has deployed both Kevin De Bruyne and David Silva in deep-lying playmaker roles this season and they have both excelled. They lead the Premiership assist charts with six each, and – unlike the forwards – they always start. Neither player has been rested yet by Guardiola this season, and they are racking up huge points tallies by teeing up chance after chance for whichever forwards Guardiola elects to play in front of them. De Bruyne is on course to win Player of the Year as he has been unplayable at times, but Silva has been equally effective from a numbers point of view, and playing both in your team could yield fantastic results. They show no signs of slowing down and should lead their club to glory this season: check reviews of the best sportsbooks and find the best odds and you will see that City are now overwhelming favourites to beat the likes of Man Utd, Spurs and Chelsea to the league title.

City are excelling going forward, but they have also massively improved defensively this season and you could use your third allowance from the club to pick one of their defenders. They have conceded just four goals in nine games and kept six clean sheets, while their defenders get chances to score from corners too. Central Defender, Nicolas Otamendi, looks a great option right now, or you could fork out a bit more money and go for Kyle Walker, who should provide more assists from his right-wing back role.