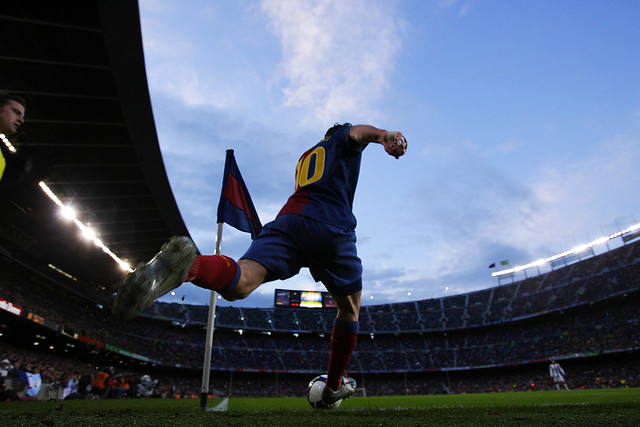 As is the case for most major leagues in European football the Spanish LaLiga Santander is also nearing its climax, and its promising to be a spectacular one. After 35 rounds the league’s two giants FC Barcelona and Real Madrid both have 81 points. The Blaugranas have the lead based on goal difference (+71 against +53 for Madrid), but Los Merengues have one game in hand, the complicated visit to Celta de Vigo’s Balaídos stadium. Numbers 3 and 4 Atletico de Madrid and Sevilla are following with 71 and 68 points respectively. Let’s take a look at the title race and the equally interesting battle for the European spots.

The title contest
FC Barcelona versus Real Madrid. Culès versus Galácticos. Lionel Messi versus Cristiano Ronaldo. Over the course of footballing history this has been one of the most heated rivalries, and over the past decade especially their direct encounters, both domestically and internationally, have been some of the most prestigious and most-watched sporting events around the globe.

Barcelona is having a very up-and-down kind of season. This was never illustrated better than by their double confrontation with PSG in the Champions League. Losing the away leg four to nil and then overcoming the deficit with a 6-1 victory at Camp Nou is the stuff of legends. Real meanwhile have been more stable this season, resulting in their current virtual first place in LaLiga with three games to go (that is, assuming they beat Celta when the previously postponed game takes place on May 17th) and their almost certain spot in this year’s Champions League final (they are defending a 0-3 lead over Monaco in the second semi-final at home next week).

This Saturday Barcelona first faces Villareal at the Camp Nou before Madrid kicks off in Granada. The Yellow Submarine’s visit to Barcelona means a visit of one of LaLiga’s strongest and most in-form outfits (currently sitting in 5th place), though their recent history with Barcelona won’t give them too much hope. They have lost the 6 visits to the Catalan capital, while Luis Enrique’s men haven’t lost at home for a consecutive 10 games. Add to that the fact that Villareal haven’t been great away from home, winning just 3 of the last 10 games on the road, and a victory for Barça seems to be on the books. Especially if Messi carries on usual.

Real’s challenge this weekend is of another calibre, as they are facing Granada at the Estadio Nuevo Los Cármenes. The hosts are one of the two teams who have officially relegated to LaLiga 1I2I3 already, together with red lantern Osasuna, so despite an away game in Granada never being an easy task a comfortable victory for Los Blancos is expected.

Zinedine Zidane is expected to send out a starting eleven consisting of mostly substitutes onto the battle field on Saturday. The likes of Alvaro Morata, whose 17 goals overall this season as a substitute to Benzema have been more than important, Nacho, who impressed as a rightback on Tuesday against Atletico’s Carrasco, and the ridiculously gifted Spanish-Dutch “La Fábrica”-graduate Asensio will have to bring home the crucial three points.

The European spots
The third spot in LaLiga, the final position resulting into automatic qualification for the Champions League group stage next season, is currently in the sturdy hands of Diego Simeone’s Atletico Madrid. They are hosting one of the season’s surprises Eibar at the Vicente Calderon coming Saturday and they have good hopes of keeping the three point lead over Sevilla intact. The Andalusians are playing Real Sociedad at home, and a loss of points is not unthinkable,. Despite the Champions League return versus arch enemies Real next Wednesday Simeone is expected to start with largely his strongest eleven against Eibar, though key figures like Frenchman Antoine Griezmann, midfield maestro Koke and new boy Kevin Gameiro might be taken off before the end if the encounter allows it.

LaLiga number 4 Sevilla meanwhile is hoping to keep Real Sociedad at bay this Friday night. The encounter has a high entertainment potential for the neutral viewer, as both teams love to have the ball at their feet and dominate their encounters with ball possession as the foundation. The abundance of talent on the pitch certainly supports the approach of both teams and has many attractions for the best fantasy football managers some of whom also like to play the best fantasy slots online.

On the home side there are the likes of Pablo Sarabia, the tireless allround attacker with the golden left foot, midfield engine Steven Nzonzi, and the talented City-loanee Stevan Jovetic, while Sociedad can count on Mexican star (and ex-Arsenal promise) Carlos Vela, midfield dominator (and ex-Real Madrid Galáctico) Asier Illarramendi, and experienced goalkeeper Rulli to try and take the points back to the Basque Country.

Sevilla should be considered the favorite in this game, despite only winning 3 of their last games and La Real riding a wave of 3 consecutive wins in LaLiga Santander. Sevilla have won their last 3 home games and hasn’t lost at home in 11 encounters. This one might just be one of this weekend’s cherries on the European football match list.