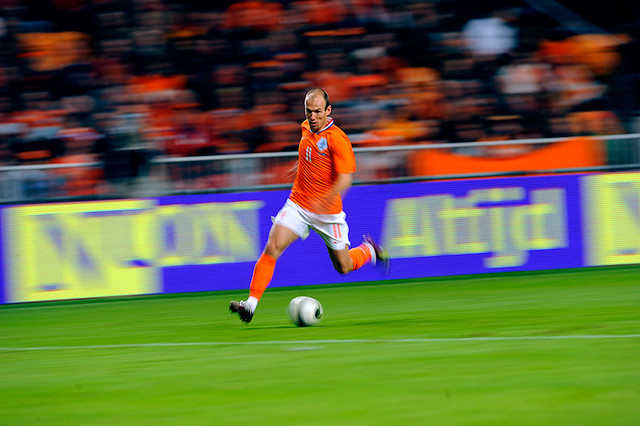 Arjen Robben for Holland (CC by 4.0) by Ryu Voelkel

October 13th, 2015 – the disbelief was palpable when they realised what had happened. In a group with Iceland, Turkey and the Czech Republic, the Dutch had failed to qualify for the 2016 Euro Cup in France. The runner-up from the 2010 World Cup and third in the last World Cup ended fourth behind the previously mentioned teams. No Orange brigade in France as a result of a series of below-par performances by the Dutch.

The Dutch national team currently finds itself in a moment of transition, with a generation including the likes of Sneijder, Van Persie en Robben slowly moving out of the way for a new one. Combine this with the fact that the Dutch simply cannot miss another tournament, and the pressure is on for the 2018 World Cup qualifiers. If you have a betting opinion of the 2018 World Cup winner then have a look at bestbettingwebsites.org.uk

In Group A Holland currently trailing France, having won 2, drawn 1 and lost 1 of the first four matches in a group that also includes Sweden, Bulgaria, Belarus and Luxembourg.

Holland – Belgium
On the 9th of November, Holland and Belgium played the 126th (!) edition of the “Derby of the Low Lands” in Amsterdam, so the expectation was that this was only going to be a friendly match on paper. While the Dutch are a team in transition, the Belgian Red Devils are considered as one of the most talented and star-studded squads in the world. In other words, the ingredients for an interesting encounter were present.

The reality unfortunately was a bit less interesting. Belgium’s Roberto Martinez (yes, that one) decided to experiment with Napoli’s Dries Mertens playing as a kind of “false number 9”, but to no avail. The Dutch center halves Bruma and most of all Southampton’s Virgil van Dijk had little to no trouble keeping the Belgians away from their area. The Belgians lacked creativity and intensity, which allowed the Dutch to string together a few decent attacks in the first. In the 38th minute this resulted in a penalty for Oranje, caused by a rather obvious Vertonghen infraction on ex-Sunderland player Jermaine Lens. Ajax-midfielder Klaassen did not hesitate, and Holland went into the halftime break ahead.

The second half initially wasn’t much different from the first one. The Belgians seemed to lack motivation and a clear tactic, while the Dutch tried what they could after seeing three of their best players leaving the pitch injured. Tottenham’s Vincent Janssen, Bayern’s Robben and midfielder maestro Sneijder all had to be replaced. Once Martinez brought on Romelu Lukaku the game changed though. The Belgian geniuses in midfield and the wings finally had a point of reference in attack, and it resulted in a deflected 82nd-minute equaliser by Atletico’s man-in-form Yannick Carrasco. Lukaku missed two more than decent chances, under the watching eye of his Everton-coach Ronald Koeman, but a 1-1 draw was an acceptable result for all parties involved in the end.

Luxembourg – Holland
A few days later the Dutch had to visit tiny Luxembourg as part of their qualifying campaign for the 2018 World Cup. Victory by some margin was expected, but the pitch for one was not going to collaborate: it looked like a mud field with some patches of grass here and there. The Dutch started as expected, dominating the game and creating a handful of opportunities for Robben and co, while the orange defense had an easy 45 minutes. Luxemburg defended as a unit, keeping many players behind the ball, but their wall was broken down after half an hour by none other than Arjen Robben, from a Davy Klaassen pass.

It looked like it was going to be smooth sailing for the men in orange, but a less-than-acceptable defensive effort by PSV rightback Brenet, followed by a foul in the box, just before the break gave Luxembourg the chance to get back into the game. Penalty, Chanot sent Everton’s Stekelenburg the other way, 1-1.

Oranje coach Danny Blind brought on ex-Watford player, Berghuis, and Man United outcast, Depay, on after the break, for Sneijder and Robben, and it paid off. Luxemburg started the second half full of confidence, but the difference in quality was simply too significant. At the hour mark Depay headed home a perfect center from leftback Blind, while he subtly curled in a free-kick five minutes before the end to make it 1-3. It hadn’t been a mesmerising display in the Luxemburg mud, but the Dutch took home the points. And who knows, maybe it’ll turn out to be start of a spectacular Memphis Depay resurrection at United as well.