GIANFRANCO ZOLA: THE DECISION OF CHELSEA TO SELL DIEGO COSTA IS THE RIGHT WAY. -
Skip to content 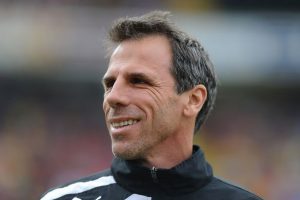 The deal, reportedly worth € 60 million, will make Costa officially return to his former club at La Liga Spanish Atletico Madrid in January. The Spanish striker is no longer in Chelsea manager Antonio Conte’s plans since the start of the season.

The arrival of Diego Costa to Stamford Bridge has brought many changes for the Blues, but with the news cracking his relationship with the coach of The Blues, Antonio Conte, from the beginning of Premier League season 2017 – 2018, especially with the addition of the arrival of the new striker The Blues Alvaro Moratta, and Moratta’s glorious appearance in the last few matches, made him (Diego Costa) increasingly marginalized and in the end he had to leave Stamford Bridge.

Costa has helped Chelsea win two Premier League titles and one League Cup but Zola feels the departure of the 28-year-old striker makes sense for the Blues given they have brought in former Real Madrid striker Morata, who scored as Chelsea won 2-1 over Atletico in the Champions League on Thursday (28/9) UTC.

As he said “I do not hesitate, the decision to leave is the right thing for him. He may have a problem, this team is not just filled with one player, and I think it’s better he went,” Zola told Sky Sports as it is cited from Betting Top 10 Indonesia.

“In some circumstances, Morata is not on the same level as Costa, technically he is a great player, he certainly has high quality, good in the air and has good legs.

“He has played for Juventus, Real Madrid, big teams, but does not play regularly, and I want to know why it happened.This year I may soon get the answer.”

Morata was able to show his sharpness since he docked at Stamford Bridge. The 24-year-old striker has scored seven goals in eight games in all competitions with the Blues this season. A hamstring injury playing against Manchester City on Saturday 30 September does however show that Chelsea need strength in depth due to the number of high-intensity games the club will play this season.