Firstly a review of Gameweek 8:

Chelsea opened the weekend with a 3-0 demolition of Leicester, and there were some excellent performances from Bournemouth, Everton, Stoke and Southampton before Monday night’s highly anticipated clash between Liverpool and Manchester United produced a dire 90 minutes with no goals and very little entertainment. Almost 45% of the weekend’s goals were scored in 2 fixtures as crowds at the Emirates Stadium and Vitality Stadium were treated to 5 and 7 goals respectively.

There were some outstanding Fantasy Football performances, from players who perhaps wouldn’t be expected to be amongst the top points scorers. Bournemouth’s Junior Stanislas scored two and assisted two to help himself to 21 points, Martin Stekelenburg made 7 saves, including 2 penalties, to score 17 points, Joe Allen scored twice for a 16-point haul and José Holebas scored and helped his team to a clean sheet for a total of 15 points. This week’s Dream Team lined up in a defensive 4-5-1 formation, but racked up 147 points: 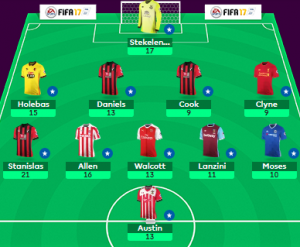 The lunchtime kick-off on Saturday is an intriguing clash between Bournemouth and Tottenham. Bournemouth have won their last three at home in the league and come into this game fresh from a week’s rest following a 6-1 mauling of Hull City. For Spurs however it will be the third in a sequence of four successive away fixtures in all competitions, with this fixture sandwiched in between important cup trips to Bayer Leverkusen and Liverpool. Added to this, Tottenham are still without their main attacking threat in Harry Kane and despite their excellent defensive record generally they’ve actually now conceded in 5 of their last 6 away matches in the league and won just two of those. A home victory for the Cherries is a big possibility here so the likes of Junior Stanislas (£5.5m) and Jack Wilshere (£5.9m) could provide some decent points at low cost. Stanislas has 3 goals and 3 assists from his last 3 matches while Wilshere, on loan from Arsenal, will be desperate to perform well against Tottenham.

In the 3pm kick-offs Arsenal v Middlesbrough looks to be the stand-out game in terms of potential Fantasy Football captains. They host Middlesbrough, a side who have lost 4 of their last 5 in the league and have scored just 7 goals in 8 games. Arsenal on the other hand have won 6 league games in a row and are the joint-top scorers with 19. Either of Theo Walcott (£7.8m) or Alexis Sánchez (£11.3m) as captain should guarantee a good points return in this one.

On Sunday Manchester City host Southampton in the early game, and incredibly Pep Guardiola’s men could be coming into this game off the back of a 4-game winless run (provided they don’t win in the Nou Camp tomorrow night of course). If results go against them on Saturday they could actually be down to fourth by the time they kick off, and the pressure on them will be increasing slightly. The visitors are currently on a run of 7 games undefeated and have only conceded once in that time, although they have got a Thursday night trip to Inter Milan to face before Sunday’s fixture. It would be a surprise if City failed to score though, and both teams finding the back of the net is the most likely outcome. Attacking players from both sides are therefore the men to look to for Fantasy Football points. Southampton’s Charlie Austin (£6.4m) has 4 goals from his last 4 league games and is the most likely scorer for the away side, while for Man City Kevin De Bruyne (£10.6m) is back from injury and despite his penalty miss last weekend he’ll pick up plenty of points over the course of the season. He already has 2 goals and 6 assists from 7 league games so far in this campaign, following on from a successful first season at City when he scored 7 and assisted 10.

The last game of the weekend will grab all the headlines as José Mourinho returns to Stamford Bridge for the first time since taking charge at Manchester United. It would be no surprise to see Mourinho set his team up to avoid defeat in this one, in a similar fashion to last night’s Bore Draw at Anfield. It’s another game where both sides would be relatively happy with a point, so a low-scoring fixture is likely. Chelsea’s Marcos Alonso (£5.9m) and Manchester United’s Antonio Valencia (£5.6m) are solid options here, with both providing potential for clean sheet points and attacking threat from full back positions.

Best of luck for this weekend, and we’ll bring you another update next week