First a Review of Gameweek 27

Chelsea look to be sailing towards the title after another routine victory last week, with Tottenham their nearest challengers after their pulsating 3-2 win against Everton. Man City failed to capitalise fully on their double gameweek after a disappointing home draw to Stoke on Wednesday evening, mirroring the frustration of their Manchester rivals United, who lost ground on the top 4 after failing to win at home to Bournemouth on Saturday. It looks like it’s Chelsea’s title to lose, Spurs and Man City should be fighting it out for second and Liverpool, Arsenal and Manchester United in a real scrap for that last Champions League place.

With a double gameweek for Man City and Stoke it’s no surprise to see their players making up over half of the starting XI in the weeks’ Dream Team. With both sides claiming 2 clean sheets in the week a strongly-performing back 5 is made up entirely of players from the two sides, while Marko Arnautovic was the joint-top scoring player of the week, tied on 16 points with Dusan Tadic, although the Southampton man achieved that in one match with 2 assists and a goal in their 4-3 win against Watford. 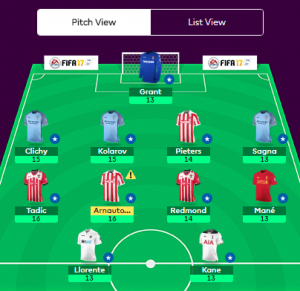 With FA Cup taking centre stage the Premier League fixture list is sparse this weekend. There are just 4 league games taking place, so big decisions to be made on whether to set your team up with reduced numbers, take a points hit to get players in or if you have your wildcard still intact put that into use.

Bournemouth welcome West Ham to the Vitality Stadium hoping that last week’s point at Old Trafford reignites their form. Prior to that battling performance they’d lost 4 games in a row and conceded 12 times in those matches. Unless they start picking up some wins soon they’ll be dragged into the relegation battle, but one man who is playing well for them despite the poor form of the team overall is Josh King (£5.5m). He has 6 goals in his last 9 league games and is on penalty-taking duties so could be a good source of points for your team this week against a team who’ve kept just one clean sheet away from home all season. The Hammers should have enough up front to trouble a leaky home defence though, and Manuel Lanzini (£6.4m), who’s chipped in with 3 goals and 3 assists in his last 7 appearances, is the man they’ll look to for this.

At Goodison Park two teams in very similar form meet, with both Everton and West Brom recording 3 wins, 2 draws and a defeat from their last 6 matches. The key thing to note here is that West Brom’s defensive record is not what is expected from a Tony Pulis team. They’ve not kept a clean sheet on their travels in any of their last 13 games, and come up against one of the league’s form strikers in Romelu Lukaku (£10.1m). He’s scored in each of his last 4 home games, bagging 7 goals in a run that can be continued on Saturday.

The other Saturday game is between 2 teams who are very much involved in the relegation scrap, Hull and Swansea. Hull have won all of the last 3 meetings between these sides and Swansea have failed to score in each of those, so recent history is on the Tigers’ side. Swansea are in good form though, winning 4 of their last 6 games, and as this game pitches the two sides with the worst defensive records in the league against each other goals could be on the cards. Gylfi Sigurdsson (£7.7m) and Fernando Llorente (£6.4m) have racked up over 100 Fantasy Football points each this season, with the former claiming 5 assists and 3 goals in the 8 league matches of Paul Clement’s Swans reign so far, and these are the main danger men in this fixture.

There’s one league game on Sunday, and it looks to be the standout fixture when choosing your captain for the weekend. Liverpool may have had some awful results against teams in the lower half recently but they’ve still got a pretty impressive home record, losing just one league game at Anfield in almost 14 months. Sunday’s visitors are Burnley, a team who’ve not won away in any competition all season and have picked up just 2 points from a possible 39 on their travels in the league this campaign. Sadio Mané (£9.5m), Philippe Coutinho (£8.2m) and Roberto Firmino (£8.4m) are a formidable front three and have amassed 27 goals and 20 assists between them in the league this season. Any of these three should provide you with good points to finish of the gameweek, but the pick of them has to be Mané, with the Senegalese international scoring 3 of the Reds’ 5 goals in their last 2 home games.