With none of Arsenal, Man City or Man United in league action last week the big winners were Chelsea and Tottenham, who are now the top 2 after both recorded routine home wins. Liverpool’s miserable form continued with defeat to Leicester and their top 4 challenge is faltering badly.

The Fantasy Football Dream Team lined up in a 3-5-2 formation with English strikers Kane and Vardy up top having scored 5 and assisting 1 between them in their team’s respective victories. Cesc Fàbregas and Pedro scored excellent points in midfield while Patrick van Aaanholt was the star defender with a goal and a clean sheet helping him to 15 points. 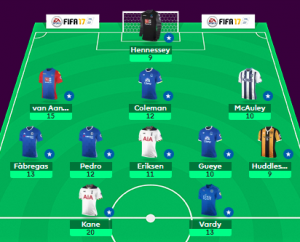 Big news this week is the double gameweek for Manchester City and Stoke. Following the Manchester club’s progress to the FA Cup Quarter Finals in midweek their league game with Stoke has been moved forward a few days, so the teams will face each other on Wednesday evening following a full round of Premier League fixtures over the weekend. With this in mind, and coupled with Gabriel Jesus’ injury, Sergio Agüero (£12.7m) looks to be the standout pick this week. City have scored 5 goals in each of their last two matches and he’s scored a brace in each. He also scored twice earlier in the season away at Stoke and has scored in each of his last 4 appearances against Sunderland. Raheem Sterling (£7.8m) could also be a good pick in midfield, having picked up 8 assists and 2 goals in his last 10 league games.

On the other side of Manchester, United are at home to Bournemouth on Saturday lunchtime. Morale was no doubt boosted when they picked up their first major trophy of the Mourinho era with last week’s EFL Cup Final win against Southampton, and the visit of another south coast club should hold no fear for them here. Bournemouth have lost each of their last 4 games and have gone 8 without a win in all competitions. They’ve conceded at least 3 goals in 6 of their last 8 away, so Zlatan Ibrahimovic (£11.5m) can be trusted to get on the scoresheet again and add to his tally of 6 goals in his last 4 matches.

Stoke City have picked up 4 clean sheets in their last 7 home matches in the league and their defence should be able to hold firm when the league’s lowest scorers Middlesbrough visit the bet365 Stadium on Saturday afternoon. Phil Bardsley (£4.3m) has been preferred to Glen Johnson (£4.7m) at right back recently so could be a good bargain buy to pick up points. Erik Pieters (£4.6m) and Bruno Martins Indi (£4.9m) have 75 points each this season and are guaranteed starters if you want to be more certain of clean sheet points should the Potters keep out Boro as expected. Don’t forget that there’s also the bonus of the second match of the week against Man City too, and while a clean sheet isn’t likely in that one there’s always the possibility of a set piece goal against a vulnerable Man City defence.

The biggest match of the gameweek is Arsenal’s trip to Anfield to face Liverpool. Despite the home side’s poor form, they always seem to raise their game for the big occasion and Sadio Mané (£9.4m) scored both goals in the recent 2-0 victory against Spurs. With 11 goals to his name this season he’s established himself as a vital player for Liverpool and should pose problems for the Arsenal defence. At the back Liverpool have kept just 3 clean sheets in their last 12 games though, with two of those coming against a League 2 side, so Alexis Sánchez (£11.6m) should get opportunities to add to his impressive goal tally this term.