Liverpool returned to winning ways in the league with a crucial 2-0 win over Tottenham. This allowed Man City to move into second above Spurs with an away win at Bournemouth. They’re 8 points behind leaders Chelsea, while just 2 points separate Tottenham in third to Man United in sixth.

Swansea’s defenders dominate the backline in the Dream team of the week, with Mawson, Olsson and Fernández picking up 39 points between them (and at a combined cost of just £13.2m). The star performer of the week was Sadio Mané as he scored both goals in Liverpool’s 2-0 win over Spurs to pick up 16 points, while Arsenal’s Alexis Sánchez also scored a brace in a 2-0 win, but his yellow card meant that he finished the week on 15. 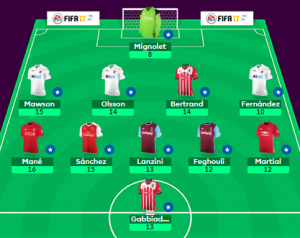 There are no early kick-offs this week so the transfer deadline is 2pm on Saturday, giving you plenty of time to study the team news and hopefully ensure all of your first XI are in action over the weekend. With the EFL Cup Final taking place there are two matches postponed from this weekend too, so be sure to bench or ditch any Man United, Southampton, Arsenal or Man City players!

Chelsea will open up an 11-point gap at the top if they beat Swansea at home on Saturday afternoon, a task which they should achieve with relative ease. They’re up against the league’s leakiest defence and Diego Costa (£10.6m) will be looking to end his mini goal drought in this one. He hasn’t scored in any of his last three league games, but before this run he hadn’t fired blanks in back to back games all season.

At the same time Everton host Sunderland at Goodison Park, and there’s every reason to captain Romelu Lukaku (£9.9m) this week. He scored 1 and assisted 2 in Everton’s 6-2 win in this fixture last season and also bagged a hat trick earlier this season when the Toffees won 3-0 at the Stadium of Light. His recent form is excellent too, having scored in each of Everton’s last 3 home fixtures including a 4-goal haul last time out against Bournemouth. At the back Everton have kept 4 clean sheets in their last 6 league games so Seamus Coleman (£5.9m) could well pick up points here. His attacking prowess is not be underestimated either, with the Irishman claiming 3 assists and a goal in his last 5 league games.

On Monday evening a fully-rested Liverpool should be too strong for a Leicester side in terrible form and returning from a midweek Champions League encounter with Sevilla. Sadio Mané (£9.3m) is the obvious choice here, with the Senegalese winger playing a starring role in Liverpool’s victory over Tottenham last time out. He’s scored exactly 11 goals in each of his three Premier League seasons, but the difference this year is that he’s reached that total in just 22 appearances. The Reds missed him while he was away at the African Cup of Nations and they’ll be hoping that the win against Spurs is a sign of things to come over the remaining 3 months of the season.