Chelsea moved a step closer to the Premier League title with a 3-1 victory over Arsenal helping to maintain their 9-point lead. Tottenham and Manchester City scraped victories and are in second and third positions respectively. At the bottom of the league it was a huge result for Sunderland, who hammered Crystal Palace 4-0 away from home to move level on points with them. There are now just 2 points splitting the bottom 5 teams in what is sure to be a tense relegation battle from now until the end of the season.

There’s no doubts about who was the Fantasy Football star of the week, with Romelu Lukaku amassing 21 points with his 4 goals in Everton’s 6-3 victory against Bournemouth. He’s joined in the Dream Team of the Week attack by Jermain Defoe and Gabriel Jesus, who each scored a brace to pick up 13 points. each. All 4 midfielders were directly involved in 2 goals each while Lamin Koné’s goal and clean sheet ensured he was the highest-scoring defender of the week. 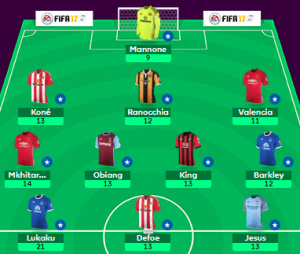 An intriguing match to get us underway this weekend when Arsenal host Hull City at lunchtime on Saturday. A few weeks ago this would have been a game in which Alexis Sánchez would have been captained by the vast majority of Fantasy managers, but with Arsenal losing their last 2 and Hull picking up an impressive 4 points from their last 2 fixtures, against Manchester United and Liverpool, there could be some second thoughts on this. Despite Hull’s 0-0 draw at Old Trafford last Wednesday they’ve still not won any of their last 10 away games in all competitions and indeed lost 9 in a row before that draw. For that reason it’s hard to see past an Arsenal win. The standout choices from this game are either the aforementioned Sánchez (£11.8m), who has 3 goals and an assist from his last 5 league games, or Olivier Giroud, who’s scored 5 and assisted 2 in his last 7.

At 3pm Man United are at home to Watford in a game they’ll be desperate to win to keep in contention for a top 4 finish. They’re undefeated in their last 15 league games and should be too strong for a Watford side who have won just 1 of their last 8 away in the league. Henrikh Mkhitaryan (£8.8m) scored and assisted last time out against Leicester and should cause plenty of problems for Watford’s defence. At the back though United look vulnerable having failed to keep a clean sheet in 8 of their last 11 league games at Old Trafford. Watford should have some chances on the counter attack so Tom Cleverley (£5.1m) could be an interesting pick, having assisted 2 goals from his 3 starts since signing from Everton.

The big match of the weekend is Saturday’s evening game, with Liverpool hosting Tottenham. Spurs have 9 wins and 2 draws from their last 11 games in all competitions while Liverpool are in wretched form, winning just 1 from their last 10. Another defeat would seriously dent their top 4 hopes and on form there’s no doubt about which team we should be looking at for Fantasy Football points here. Harry Kane (£11.3m) has scored on each of his last 2 visits to Anfield and also has 7 goals from his last 7 league games so should be a reliable source of points up front. At the back Ben Davies (£4.7m) could be a cheap source of points in the absence of the injured Danny Rose.

Best of luck for this weekend, and we’ll bring you another update later this week.