First a review of Gameweek 22:

Chelsea and Arsenal were the big winners last week as they were the only sides from the top 6 to secure victories. Manchester City and Tottenham played out an entertaining 2-2 draw while Wayne Rooney became the outright leading goalscorer for Manchester United with his 250th goal for the club providing his team with a last-gasp equaliser against Stoke City.

It was a week for defenders to shine in Fantasy Football, with the Dream team lining up in a 5-3-2 formation. Everton’s Seamus Coleman and Chelsea’s Gary Cahill both scored and kept clean sheets in their sides’ victories over Crystal Palace and Hull respectively. Roberto Firmino was the highest-scoring attacking player of the week, with his 2 goals helping him to 14 points, despite Liverpool suffering a shock 3-2 home defeat to Swansea. 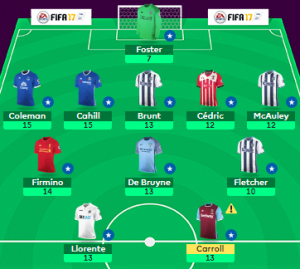 The first fixture to take note of this week is Arsenal’s home game against Watford. The Gunners are in fine form having won 6 and drawn 1 of their last 7 games in all competitions, thrashing Southampton 5-0 in the FA Cup on Saturday evening. This is in stark contrast to Watford’s 1 win in 9 games, and even that was an FA Cup win against a side battling relegation from the Championship. They’ve lost 5 of their last 6 away in the league and should be put to the sword by Arsene Wenger’s team here. Theo Walcott (£7.4m) scored a hat trick at the weekend and that should be enough to ensure that he takes a starting spot on Tuesday evening. He’s missed the last 5 league games through injury but scored 3 times in the 5 league games prior to that and should get chances against a side who’ve not kept a league clean sheet away from home since October.

Also on Tuesday, Burnley will be looking to continue their impressive home record against a side who have been awful away all season. Burnley have picked up 25 of their 26 points this season at Turf Moor while Leicester haven’t won away in the league, losing 8 and drawing 3 of their matches away from the King Power Stadium. Burnley’s defence is key to their record here; they’ve kept clean sheets in 4 of their last 5 home games in all competitions and have conceded less league goals per game at home than the likes of Manchester United, Arsenal and Liverpool. Tom Heaton (£5.0m) has picked up 93 Fantasy Football points so far this season, a goalkeeping total only bettered by Chelsea’s Thibaut Courtois. Ben Mee (£4.6m) is also a bargain buy, having completed 90 minutes in every game for Burnley and scoring 61 points in the process.

The big game of Tuesday night is undoubtedly Liverpool v Chelsea. Liverpool here have faltered in recent weeks, winning just one of their last 8 games in all competitions and losing 3 games at Anfield in the last 8 days. They’re still just about clinging onto a place in the top 4, but defeat in this one would mean that they’ll slip to fifth if Man City win on Wednesday. The last thing they want at the moment is a visit from Chelsea, a side who are top of the table, have won 15 of their last 16 league games and are undefeated from their last 5 trips to Anfield (winning 3 and drawing 2). Eden Hazard (£10.2m) scored in the 1-1 draw here last season, and with 9 goals and 5 assists to his name this season will be a real threat to Liverpool’s defence.

On Wednesday Manchester United face Hull City in what should be a routine victory for the home side. They’ve gone 17 games without losing at Old Trafford, which is once again becoming a place that visiting teams fear. United beat Hull here 3 weeks ago in the EFL Cup Semi Final and have won all 5 of their home meetings with them, scoring 16 goals in the process. Henrikh Mkhitaryan (£8.9m) and Zlatan Ibrahimoiv (£11.7m) will be the key attacking threats in a game that promises goals.

Best of luck for this weekend, and we’ll bring you another update later this week.