Chelsea got straight back to winning ways with a 3-0 win at Leicester, despite being without their star striker who has been the subject of a lot of media coverage regarding a move to China and a bust up with manager Antonio Conte. In the rest of the top 6, Manchester United and Liverpool played out a 1-1 draw while Tottenham and Arsenal were both 4-0 winners against West Brom and Swansea respectively. Manchester City were the big losers at the top end of the table, suffering a 4-0 hammering at Everton to drop to fifth position.

Some huge Fantasy Football points hauls this week, with the Dream Team scoring 150 points between them. Marcos Alonso’s 2 goals and clean sheet ensured he was the star man with 21 points and Harry Kane wasn’t too far behind him on 17 after notching a hat-trick. Elsewhere Abel Hernández and Marko Arnautovic scored 2 goals each and Michail Antonio got a hat trick of assists. 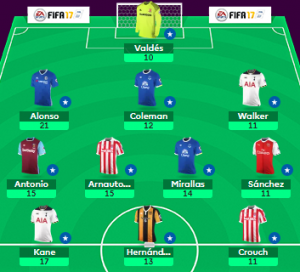 The first game of the weekend sees the Premier League’s best attacking side Liverpool (49 goals from 21 games this season) at home to the worst defensive side Swansea (who’ve conceded 49 goals from 21 games this season). There’s surely only one outcome here, and the returning Philippe Coutinho (£8.3m) is a man to seriously consider for your midfield. He scored or assisted 11 goals in 11 league games at the start of the season and should be back in the starting line-up on Saturday after missing 7 games through injury. Alternatively, Adam Lalllana (£7.7m) or Roberto Firmino (£8.4m) should be able to pick up good points in this one. At the back Liverpool have improved considerably since the start of the season, keeping 8 clean sheets in their last 14 games in all competitions. Simon Mignolet (£4.7m) and Ragnar Klavan (£4.6m) are both available at good prices and should be able to keep Swansea’s attack at bay fairly easily.

The late game should provide plenty of entertainment as Manchester City take on Tottenham at the Etihad. Pep Guardiola’s City team have become consistently inconsistent, summarised by their last 2 games in which they thrashed West Ham 5-0 away from home in the FA Cup and followed that up with a dismal 4-0 hammering away at Everton. They’ve won 9, drawn 6 and lost 7 of their last 22 games in all competitions and conceded 3 or more goals in 5 of those. It’s anyone’s guess which City turn up on Saturday evening, but it’s still hard to ignore Sergio Agüero (£12.8m) for your Fantasy team. He has an excellent record against Spurs, scoring 10 goals in 10 games against them and also has 11 league goals this season from 1,231 minutes, an average of a goal every 112 minutes. For the away side Harry Kane (£11.1m) is in top form, bagging 6 goals in his last 4 games, and is well on the way to scoring over 20 league goals for the third season running.

On Sunday Arsenal are at home to Burnley and will be strong favourites to claim the three points. Burnley have the worst away record in the league this season, losing 8 and drawing 1 of their 9 games. They’ve scored 3 and conceded 20 those 10 matches, so Arsenal players at both ends of the pitch should pick up Fantasy Football points this weekend. Alex Iwobi (£5.9m) could be an interesting option; the Nigerian is enjoying an extended run in the side and assisted twice in last week’s 4-0 win at Swansea. Olivier Giroud (£8.7m) is a doubt with an ankle injury, and if he’s not available then Alexis Sánchez (£11.9m) could move back into the central striking position in which he’s been so effective this season and could well add to his league tally of 14 goals and 8 assists. Bearing in mind Burnley’s awful attacking record away from home Gabriel (£4.8m) could provide clean sheet points at a bargain price. He’s started 8 of Arsenal’s last 9 league matches, including filling in for the injured Héctor Bellerín (£6.5m) at right back last week.

The final game of the weekend is another home banker, and one in which goals should be on the cards for title favourites Chelsea. They’re up against a Hull side who are ill-equipped for life in the top flight and have lost 8 successive away league games. With 23 goals conceded in those 8 games it’s difficult to see how they’ll keep Chelsea at bay. Diego Costa (£10.3m) is back in contention for the Blues, and if he starts expect him to find the net at least once. Pedro (£7.0m) has 2 goals and an assist from his last 3 appearances so is worth a look in midfield, and at the back Marcos Alonso (£6.6m) continues to impress. His 2 goals at Leicester last week mean that he now has 3 league goals to match his 3 assists for the season so far, and he’s also played the full 90 minutes in all 11 of Chelsea’s league clean sheets this campaign.