Gameweek 18 and 19 previews of Fantasy Premier League, courtesy of Bet365

For the second week running Arsenal lost 2-1 after scoring first and were the only team in the top 6 who failed to win. They’ve now dropped to a very familiar fourth position, while Chelsea continue to set the pace after their 11th successive league victory.

The Fantasy Football Dream team this week lined up in a 3-5-2 formation, with Sunderland’s Jordan Pickford in goal and Patrick van Aanholt in defence. van Aanholt was actually the joint-highest scoring player of the week along with Southampton’s Jay Rodriguez. He got 2 goals, as did both of the strikers, Alvaro Negredo and Zlatan Ibrahimovic. 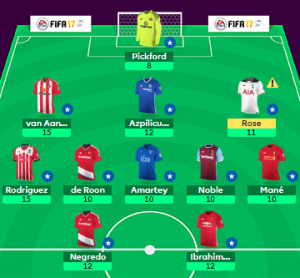 With 2 gameweeks in quick succession (gameweek 18 takes place from 26 December to 28 December and gameweek 19 from 30 December to 1 January), we take a look at those teams who have a favourable festive fixture list and therefore should provide potential for Fantasy Football points aplenty:

Manchester United have two home games, against north east sides Sunderland and Middlesbrough. United have won three successive league games and with both of the visitors in the bottom half of the table they should have no problems in taking maximum points. Zlatan Ibrahimovic (£11.4m) is back in form with 7 goals in his last 6 league games and has played the full 90 minutes in every one of his 16 league games for the Red Devils so far. There’s little likelihood of him being rested as United chase the leading pack, so expect him to feature on the scoresheet over Christmas! It’s also worth noting that only bottom club Hull City have scored less than Sunderland and Middlesbrough in the league this season, so United’s defenders should be a safe bet. Phil Jones (£4.8m) and Antonio Valencia (£5.4m) will be hopeful of clean sheets in both matches.

Burnley could be the club to look to for points at a budget cost over the next 2 gameweeks. The only two visiting teams to have won at Turf Moor since the opening day of the season are Manchester City and Arsenal and the Clarets have won 5 of their last 8 at home, including the notable scalps of Liverpool and Everton. They have the same opponents over the next week or so as Manchester United, with Sunderland and Middlesbrough both visiting. In goal Tom Heaton (£4.8m) has 3 clean sheets and a penalty save to his name so far in this campaign and has claimed the maximum 3 bonus points in 3 separate matches. He actually has the second-highest points total of any goalkeeper in the game this season and with two goal-shy teams to face he will be confident of further points.

Another team with two favourable home fixtures are Arsenal. Alexis Sánchez (£11.8m), the highest scoring player in this season’s game, will be relishing the games against West Brom and Crystal Palace. His record of 6 goals and 3 assists from his last 5 games speaks volumes about the form he’s in, and he’s excelled in the striking position entrusted in him this season by Arsène Wenger. Theo Walcott (£7.8m) could also be a good option, with the England man bagging 3 goals in his last 5 appearances. Key points to note here are that the Gunners have won each of their last 5 home games against West Brom and haven’t lost at home to Palace since 1994.

Finally, league leaders Chelsea will also play at home twice, against Bournemouth and Stoke. It’s hard to see them losing another game all season with the kind of form they’re in right now, and considering Stoke have won only 2 of their last 7 away and Bournemouth just 1 of theirs, it would be a massive shock if either of these were to return back from Stamford Bridge with points in the bag. Diego Costa (£10.8m) is suspended for the game against Bournemouth and Eden Hazard (£10.4m) is a doubt with a knee injury, so the best options for these 2 games could be defenders César Azpilicueta (£6.5m) and Marcos Alonso (£6.4m). Both have played every minute of Chelsea’s 11-game winning streak and contributed to 9 clean sheets in that run. They’ve also chipped in with 3 assists between them in that time, so there’s lots of points-scoring potential from the two of them.

Best of luck for the festive period, and we’ll bring you another update early in the New Year.