There was an incredible amount of goalmouth action in the league this weekend, particularly on Saturday when 29 goals were scored across 6 league matches. Last season’s champions Leicester finally returned to form as they raced into a 3-goal lead with just 20 minutes gone against Man City, eventually triumphing 4-2. Chelsea recorded their ninth successive league victory to move 3 points clear at the top, while Manchester United fans will be hoping that the victory against Tottenham is a sign that they’re back. They’re just 6 points from the top 4 now with a favourable Christmas fixture list.

The standout Fantasy Football performers of the week were Jamie Vardy, who bagged his first ever Leicester hat-trick to score 17 points, and Wilfried Zaha, who scored one and assisted two in Crystal Palace’s 3-3 draw at Hull. There were also strong performances from Swansea pair Gylfi Sigurdsson and Fernando Llorente, while Aleksandar Kolarov was the top points-scoring defender of the weekend despite his team’s abysmal defensive showing. He may have been part of a defence that shipped 4 goals but scoring one and setting up another at the other end helped him to a personal haul of 11 points this weekend. 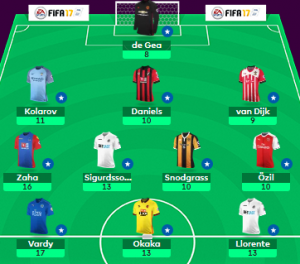 There are 2 games on Tuesday night, and the pick of these is undoubtedly Everton v Arsenal. There is a stark contrast in form between these 2 teams, with Everton losing 3 and drawing 2 of their last 5 league games and Arsenal winning 3 and drawing 2 of theirs. The Gunners have won the last 3 meetings between the two, including a 2-0 win at Goodison in March. Alexis Sánchez (£11.7m) picked up an assist in that game and has 2 assists and 5 goals from his last 3 league matches. He has to be fancied here against a team that have failed to keep a clean sheet in their last 5 league games. If you can’t stretch your funds far enough to get Sánchez on board then Mesut Özil (£9.6m) is the man to look to. He’s scored 9 goals in 20 games in all competitions this season, which is a big improvement from the 8 he scored in 45 last year.

Onto Wednesday, and another game between sides with contrasting fortunes as league leaders Chelsea travel north to face the team who are propping everyone else up, Sunderland. Chelsea are looking for a tenth successive victory and will be looking to Diego Costa (£10.9m) for the goals to achieve this. His winner at the weekend against West Brom means that he has now scored or assisted in 13 of his 15 league appearances this season. He’s the league’s leading scorer and on paper should be helping himself to plenty more in Chelsea’s next 4 matches, which are all against clubs that currently sit in the bottom half of the table.

Man City’s game against Watford is one that should produce goals at both ends. City’s defence were all over the place in their 4-2 defeat to Leicester at the weekend and they’ve kept just 2 clean sheets in their 15 league games in this campaign. Watford’s Roberto Pereyra (£6.0m) could therefore be a decent shout in midfield. He’s back from suspension for this one and will cause problems for that shaky defence. The Hornets have plenty of defensive issues themselves, having conceded at least 6 goals more than anyone else in the top half. They’ve shipped 9 in their last 2 away league games and it would be a major shock if they were to keep Man City’s potent attack at bay. Nolito (£8.6m) looked dangerous in his 23 minutes on the pitch on Saturday evening and got himself on the scoresheet. Bearing in mind the performance of his teammates in that one he may well have done enough to get himself into the starting line-up and should provide potential for a good points haul if he gets the nod.

Tottenham were not at their best in Sunday’s defeat to Manchester United, but should get back to winning ways in a fixture that looks as one-sided as they come. They face Hull City, who have won just 1 of their last 13 league games and have failed to score on each of their last 3 league visits to White Hart Lane. With this game followed by a home game against Burnley now is the time to load up on Tottenham’s attackers, so Harry Kane (£11.2m) and Christian Eriksen (£8.3m) will no doubt be transferred in by lots of Fantasy managers. Don’t forget too that Spurs had the joint-best defensive record in the league last season and they’ve continued that form into the 2016-17 campaign, with no-one conceding less than them so far this term. Hugo Lloris (£5.5m) is therefore a safe option in goal, particularly with Spurs’ run of upcoming fixtures taken into account.

Best of luck for this round of fixtures.