First a review of Gameweek 13

There were wins for Chelsea, Liverpool, Man City and Arsenal this week, so the top 4 remain in the same positions in the Premier League table. Tottenham fell to their first league defeat of the season so are now 4 points off that top 4, while Manchester United also dropped points and themselves are 4 points adrift of Spurs.

This week’s Fantasy Football Dream Team lined up in a 3-4-3 formation, with Stoke’s clean sheet helping Bruno Martins Indi and Lee Grant to feature at the back. Matt Dawson and Gareth McAuley scored a goal each as Hull drew 1-1 with West Brom, so they also took their places in the defensive third. Four players who were on the scoresheet in the 9-goal thriller between Swansea City and Crystal Palace take up the majority of the attacking positions. Fernando Llorente was the pick of these after scoring twice and assisting another in just 25 minutes on the pitch. 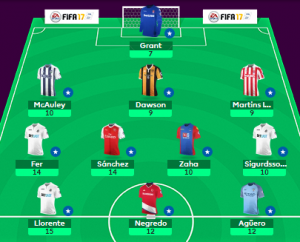 The weekend starts in spectacular fashion on Saturday lunchtime, with the two title favourites up against each other as Man City host Chelsea at the Etihad. This is such a hard game to call as both teams are in excellent form; Chelsea have won seven successive league games to move to the top of the table, while Manchester City are undefeated in their last 6 in all competitions. They’re also on an unbeaten run of 14 matches at home, so if Chelsea can get a win here they’ll surely be the new favourites for the 2016-17 Premier League crown. City have kept just 2 clean sheets in the league all season, so Chelsea’s attacking players will be confident enough in their ability to bag at least once. Pedro (£7.3m) scored a wonderful goal in their last game against Tottenham and he now has 3 goals and 4 assists from his last 6 league appearances, so he’s definitely worth a look, as is Diego Costa (£10.6m), who has 10 goals in 13 league games this season. He’s joined at the top of the league scoring charts by City’s Sergio Agüero (£13.1m), who opened the scoring in this fixture last season and can never be overlooked.

In the 3pm kick-offs Tottenham are strong favourites at White Hart Lane against Swansea. The visitors got their first league win since the opening day when they beat Crystal Palace in a 9-goal thriller last weekend, but a defence that concedes 4 goals at home to Crystal Palace is there for the taking in an away game to a side with as much firepower as Tottenham. The Swans have never beaten Tottenham in a Premier League game, with 8 wins and 2 draws for Spurs from the 10 matches they’ve played. With this in mind Harry Kane (£10.9m) is an obvious captain choice; the England striker has scored 5 times in his last 5 league games and has scored over 20 league goals in each of the last 2 seasons.

Another game that should bring a comfortable home victory is Stoke v Burnley. Despite a defeat in their last home game against Bournemouth Stoke are actually one of the form sides in the country, having lost just once in their last 8 and winning 4 of their last 6. Saturday’s visitors have a terrible away record this season, losing 5 and drawing 1 of their 6 away games in all competitions and scoring just one goal (a penalty when they were already 3-0 down at Southampton). Stoke’s Lee Grant (£4.1m) and Bruno Martins Indi (£4.9m) could be value picks at the back for this encounter.

The Monday night game is another that has the promise of clean sheet points for the home side. Middlesbrough may not have set the world alight since the return to the Premier League, but they’re solid enough at the back, conceding the least goals out of anyone in the bottom half. They’re up against the league’s lowest scorers in Hull City and having kept clean sheets against Arsenal and Bournemouth recently, as well as conceding just one each to Chelsea and Man City, their defence should be able to keep the likes of Adama Diomande at bay. Calum Chambers (£4.4m) and Antonio Barragán (£4.5m) are sure starters and both good value at low prices.