Gameweek 10 saw a return to prominence of several attacking players, with 28 goals scored over the 10 matches. Seven teams still managed to keep clean sheets though, with 2 of these at Old Trafford as Manchester United were held to a goalless draw with Burnley. This saw the Red Devils lose even more ground on the leaders as the top 4 all won. Man City, Arsenal and Liverpool are separated only by goal difference and Chelsea are a point behind them in fourth.

This week’s Fantasy Football Dream Team lined up in a 3-4-3 formation and scored 137 points. Tom Heaton’s outstanding performance in goal for Burnley saw him score 11 points to take his place in goal. Man City’s Ilkay Gündogan was the standout midfielder after scoring two and assisting one in a 4-0 rout at West Brom to pick up 18 points. Sergio Agüero also scored twice and claimed an assist in the same game, scoring 16 points as the star attacker. The remaining 5 players in the attacking positions were all involved in 2 goals each, so plenty of strong performances this week. 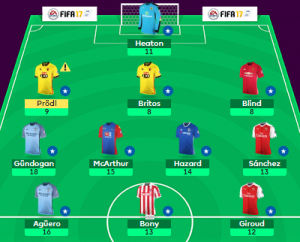 No Friday night kick-off this week or early game on Saturday, so transfer deadline is 2pm on Saturday. Great news for those of you who like to study team news and probable line ups before making your transfers!

Man City’s home game against Middlesbrough looks to be the fixture that most people will be directing their captain choice towards. City got back to winning ways in style last week with a 4-0 away victory at West Brom, and followed that up with an impressive 3-1 win against Pep Guardiola’s former side Barcelona in the Champions League. They’ve racked up 42 goals in 18 games in all competitions under Guardiola and are joint-top scorers in the league with 24 from 10 matches. They should be too powerful for Middlesbrough, and along with usual suspects Sergio Agüero (£13.1m) and Kevin De Bruyne (£10.7m) there’s a bargain on offer in Ilkay Gündogan (£5.6m). He’s scored twice in each of his last 2 matches, and is making that central midfield position at City his own.

The late game promises to be an absolute cracker with Chelsea hosting Everton. Chelsea have been in sumptuous form having won 4 games in a row in the league, scoring 11 times without reply in that run. Everton should provide a stern test to that defensive record though, with Romelu Lukaku (£9.8m) and Yannick Bolasie (£6.0m) in great form with 8 goals and 7 assists between them from the last 7 league games. Chelsea’s Eden Hazard (£9.9m) and Diego Costa (£10.4m) are looking dangerous too, so there’s plenty of firepower for both sides. Last season this fixture finished 3-3 and if Saturday’s match goes along the same lines then all four of those players mentioned could be on for big scores this week.

Onto Sunday and a massive game at the Emirates as the first North London Derby of the season gets underway. Historically this is a game that rarely disappoints and goals are usually on the cards when these two meet. Honours have been even recently between the sides, with the last five fixtures producing 3 draws and one win for each side. Both teams have scored in each of these games, so you’d expect the attacking players to come out on top again. Arsenal’s Mesut Özil (£9.6m) scored an amazing goal in the Champions League on Tuesday night and also has 4 goals and an assist to his name in the league this season. He assisted Arsenal’s equaliser in this fixture last season and could be a shrewd pick this week. The away side will be tempted to rush Harry Kane (£10.7m) back for this one. He’s missed the last 10 games through injury and his absence is really being felt at the moment. Spurs have failed to score in three of their last five, and haven’t won in their last 6. Kane’s curling effort put Tottenham ahead the last time these two sides met and he’ll be keen to get back amongst the action, and the goals, this weekend.

Best of luck for this weekend, and we’ll bring you another update before next week’s international break.