Overall it was a low-scoring week, with almost half of the teams in the Premier League keeping a clean sheet this weekend. There were goalless draws at Bournemouth, Arsenal and Swansea, and over the 10 games just 19 goals were scored. Just one point splits the top 5 in the Premier league now, while Chelsea’s drubbing of Manchester United ensured a miserable return to Stamford Bridge for José Mourinho and his Manchester United team are now down in 7th, 6 points away from the joint leaders.

For the second week running the Fantasy Football Dream Team lined up in a defensive 4-5-1 formation, showing just how much defences have been on top over recent weeks. Winston Reid and Gary Cahill picked up 14 points apiece as they contributed at both ends with a goal and a clean sheet each in their team’s victories this weekend. Kelechi Iheanacho was the star forward despite playing just 45 minutes in Man City’s draw with Southampton, and the highest scoring player overall was Stoke’s Xherdan Shaqiri, who scored both goals in their 2-0 win against Hull. 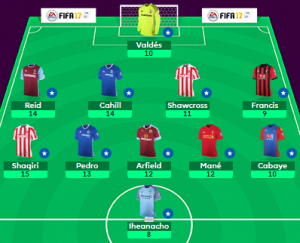 First up this weekend Arsenal take a trip to the north-east to face struggling Sunderland. The away side will be looking to bounce back from a disappointing result against another north-east team last week, after a goalless home draw with Middlesbrough prevented them from topping the Premier League. They’ll be confident of doing so with Saturday’s hosts in such woeful form, 2 draws and 7 defeats from their 9 league games so far under David Moyes see them languishing at the bottom of the table. The Gunners have kept a clean sheet in 7 of their last 8 games in all competitions while Sunderland have failed to score in their last 2, so Petr Cech (£5.5m) looks to be a safe option in goal this week and in midfield Theo Walcott (£8.1m) has 7 goals from his last 7 appearances and will be looking to add to his tally this week.

At 3pm Manchester United are at home to Burnley. United have fallen into poor form of late with just one win in 6 in the league. They’ll be desperate to bounce back after a heavy defeat to Chelsea last weekend, and this week’s game looks to be the perfect fixture for this. The visitors have lost all three of their away games in the Premier League this season, conceding three goals in each of them, and have also lost and conceded three goals in each of their two visits to Old Trafford in the Premier League. Zlatan Ibrahimovic (£11.3m) will surely lead the line on Saturday and he’ll be looking to rediscover his scoring touch after going 5 league games without a goal. He’ll be in many Fantasy managers’ minds when choosing their captain this week.

Also at 3pm, last season’s two shock title challengers are up against each other at White Hart Lane, with Tottenham hosting Leicester. Spurs are the only undefeated side in the league having won 5 and drawn 4 of their opening 9 fixtures. They’ve won 3 and drawn 1 at home, with Leicester losing all 4 of their away games, suggesting that a home win is on the cards here. It’s an impressive defence upon which Tottenham’s form is built; they’ve conceded only 4 league goals so far this season and have kept 8 clean sheets from 13 games in all competitions. With none of their attacking players in scintillating form the safest bet is to opt for defensive options, and the two standout performers are Kyle Walker (£6.1m) and Jan Vertonghen (£5.7m), both of whom have started every league game for Spurs this season.

On Sunday afternoon Southampton vs Chelsea should provide a really entertaining game, with both sides in good form coming into this one. Chelsea have benefitted hugely from Antonio Conte’s change in formation, with 9 goals scored and none conceded in their 3 matches since the switch to 3-4-3. Eden Hazard (£9.8m) has scored in each of his last 2 matches, Victor Moses (£5.5m) is thriving as a wing back and Nemanja Matic (£5.0m) has 5 assists to his name already this season. For Southampton Nathan Redmond (£5.9m) has 2 goals from his last 2 league games and Charlie Austin has 4 from 5. The form of these two, amongst others, has helped the Saints to an unbeaten run of 5 league games.