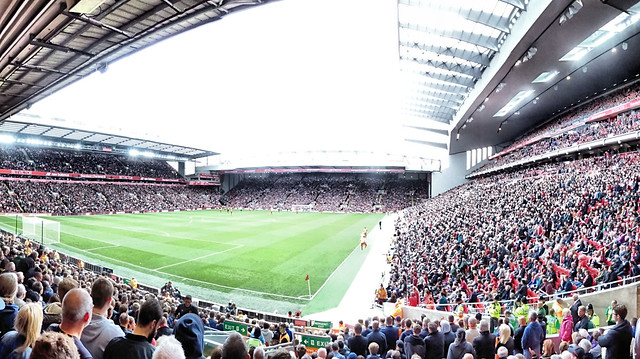 “Anfield will be hosting the game of the weekend when Man City come to visit. Why not check out 666casino slot games while waiting for this spectacle to come around this weekend.” (CC by 2.0) by dom fellows

Gameweek 7 saw Liverpool dropping points in the Premier League for the first time this season, allowing Man City to get next to them on points and hop over them on goal difference. Earlier that day, West Ham caused what probably was the upset of the weekend by defeating Man United 1-3 at the London Stadium. It’ll be interesting to see if the Hammers can continue on their way up this weekend away at Brighton. Gameweek 8 also offers plenty of other interesting encounters for FPL managers, including the one between outstanding performers Watford and Bournemouth, the clash of giants between Liverpool and Manchester City, and the potentially goal-laden match between Leicester and Everton.

Some observations ahead of Gameweek 8

We’re starting with Wolves, because at times it seems that their performances so far this season have potential but can be a bit laboured. The newly-promoted side is quickly and smoothly adapting to life in the Premier League, with 9th position after seven games as a result. Nuno Espirito Santo’s men are not the statistically most flamboyant bunch, with 8 goals scored and 6 conceded so far, but they’re organised, mature and a seemingly perfect fit for football in the top flight. Some of their players, particularly in defence, have been very good value – doubly so after Doherty assisted Jonny for his first goal of the season at the weekend and both players scored 12 points each.

When Leverkusen’s Bernd Leno transferred to Arsenal for €22 million about three months ago, he surely hoped to get more playing minutes from the get-go. Instead, a hamstring injury for his rival and PL veteran Petr Cech last weekend meant that the German goalkeeper could finally make his Premier League minutes. Leno is a very able Goalie and it will be interesting to see if he can make the starting spot his own, especially for FPL managers considering his £5.0m price tag. We think the starting position is now his to lose so all down to performance over the next few weeks.

Elsewhere in London, it feels like manager Manuel Pellegrini has put the worst of his West Ham‘s start to the season behind him. Their excellent win over United last weekend came after a 3-1 victory over Everton, a 0-0 draw against Chelsea, and an 8-0 drubbing of Macclesfield in the League Cup. Felipe Anderson (£6.8m) had some moments of excellence against United, but key man for the Hammers is Austrian winger-slash-striker Marko Arnautovic. Despite some injury worries, he played last weekend and put one past De Gea to finish off the game, his fourth of the season.

At the very bottom of the table, Huddersfield are having a horrid start to the 2018-19 campaign and what’s probably most worrying is that there doesn’t seem to be a big improvement on the way anytime soon. The Terriers have scored the least goals (5 in 7 games), conceded the most goals (16) and they haven’t recorded a victory yet this season. With away games against Burnley and Watford coming up in the next three gameweeks, as well as a home game against Liverpool, times could be getting even tougher for Huddersfield.

Two of our Premier Picks last week, Sterling (14 points) and Trippier (11 points) were in the top 8 of gameweek points scorers for gameweek 7. This week, after his two goals and 13-point haul against Cardiff last weekend, the first premium pick on the list is Tottenham’s Harry Kane (£12.5m). He’s the most expensive striker in the official game, he costs over a million more than Kun Aguero, but if previous seasons are any indication, Kane goes through (long) scoring sprees. After scoring three goals in his last two games and with Cardiff at home coming up this weekend, the chance of the English forward hitting the back of the net again in a couple of days time is quite high. In the next four games after that, he faces West Ham, Wolves, and Palace, which should further increase his FPL appeal.

Another very premium pick this week is Chelsea’s Eden Hazard (£11.1m). With some fans and followers already predicting Hazard to become this year’s Momo Salah, the Chelsea wizard is having a blast of a season so far. He now has more owners (40.9%) than Mo Salah in the official game and he will hopefully be rested for Chelsea’s Europa League home encounter with Vidi FC, like he was for the club’s first mid-week game against PAOK two weeks ago. The Blues are the third-most scoring outfit in the Premier League at the moment (15 goals), while this weekend’s opponent Southampton have conceded seven goals in the last three games and allowed a worrying average of 13.6 shots per game so far this season. Eden could easily be in the points this weekend.

Our final premium pick this week is Leicester’s Jamie Vardy (£8.9m), who has rewarded his FPL owners with 19 points since returning from a red-card ban in gameweek 6. The energetic Englishman, who’s no longer available for the Three Lions and can therefore rest during the upcoming international break, has scored two goals and provided one assist in his last two games. He’s facing an Everton side this weekend that has already conceded 11 goals this season, while West Ham (home), Cardiff (away), and Burnley (home) are up in the four-week period after that, so we could be running straight into a Vardy party sometime soon.

Hopefully our differential pick for Gameweek 7, Gudmunsson, was followed by some as he came good with an assist and his first goal of the season giving him 13 points for the match and the 5th highest scorer of the week. Our first differential pick this week is a real one, seeing as he’s currently part of only 1% of FPL squads. Brighton’s Anthony Knockaert (£5.5m) blanked away against City last weekend, but in the three gameweeks before that, the young Frenchman scored 1 goal, provided 2 assists, and brought home 18 points for his FPL owners. On top of that, Knockaert made another ten attempts at an assist over the last four games, equal to Chelsea’s Hazard and just one less than City’s David Silva. With Brighton not facing a team from the top six in the coming nine gameweeks, now could be a great moment to bring in Anthony Knockaert.

Another differential attacking asset who’s been flying pretty much under the radar so far is Wolverhampton’s Raúl Jiménez (£5.6m). The Mexican striker is actually a steal at his current price, especially considering that he’s his club’s starting central attacker. He scored a goal and provided two assists in the last three games, rewarding his FPL owners with 18 points in the process. As a matter of fact, Jiménez ranks second in the Premier League when it comes to shots on target over the last four gameweeks, just behind Spurs striker Harry Kane (7 shots vs 8). With Palace, Watford, and Brighton facing Wolves over the next three gameweeks, there will be opportunities for Jiménez to add to goal and assist tallies.

If you have Harry Kane (£12.5m) in your team already, he should probably wear the armband this weekend when he’s up against Cardiff at home. If you don’t have him in your team, but you have the money available to bring him in or are using a wildcard, you should probably go for Kane as well, and hand him the captaincy while you’re at it. If you don’t have Kane in your squad and there is no reasonable possibility to change that reality, then you’ll just have to hope that he won’t reward the undoubtedly very high number of FPL managers who will be captaining him this weekend. After a somewhat sluggish start to the season, the English striker seems to have found a bit of a purple patch, scoring three goals in his last two outings. Against opposition that has conceded six goals in three away games so far this season, more attacking returns are on the cards for Harry Kane.

At Craven Cottage this weekend, there is a real London derby on the menu with Fulham hosting Arsenal for gameweek 8. The Cottagers have played attractive, attacking football so far this season, with lots of goals as a result, both in favour and against them (8 and 16 goals, respectively). Therefore, many eyes will be on Arsenal’s Alexandre Lacazette (£9.5m) on Sunday, as the French striker will be looking to provide attacking returns for a sixth consecutive time. In his last five games, Lacazette scored 2 goals and provided 4 assists, scoring 34 FPL points in the process. It wouldn’t be a surprise to the Frenchman to add to his totals this season.