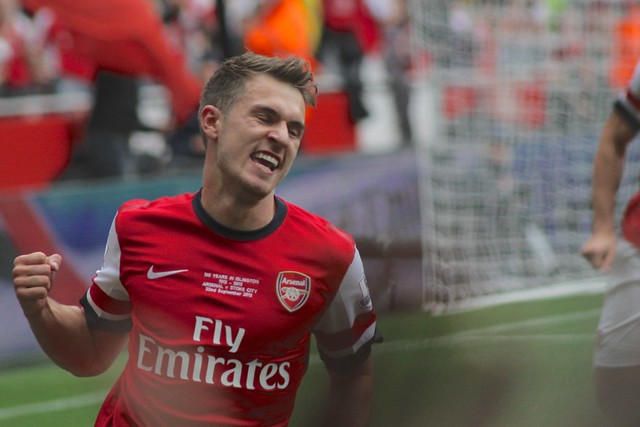 “Will Arsenal’s Aaron Ramsey have reason to celebrate again this weekend despite his contract dispute with the club?” Have a celebration of your own playing new slots over at this website. (CC by 2.0) by Ronnie Macdonald

It’s week 7 in the Premier League and Liverpool are leading the pack with a flawless 18 points from this campaign’s first six games, followed by Man City and Chelsea with 16 points each. Last weekend saw a few interesting results, of which Chelsea’s away draw at West Ham was probably the least anticipated by FPL managers around the world. The Blues saw their 5-game winning streak ended by a 0-0 draw against a resilient Hammers outfit, who’ll be hosting a struggling Man United this weekend. Other interesting fixtures include surprise package Watford visiting the Emirates, Chelsea hosting Liverpool for a second time in four days, and Man City welcoming a travel-sick Brighton (missing popular FPL players, Dale Stephens and Pascal Gross from midfield due to injury). Recent injury news affecting the rather less interesting Newcastle v Leicester match is that Demarai Gray has a leg injury keeping him out for Leicester for 3 to 6 weeks whilst recent Newcastle purchase Salomon Rondon misses out with a thigh injury.

Some observations ahead of Gameweek 7

Thanks to a Harry Kane penalty, a second-half strike from Erik Lamela, and a crucial save from Paulo Gazzaniga in extra time, Spurs ended a three-time losing streak with a tough away victory against Brighton. Kane stated that it had been the first game in which he was truly satisfied with his all-round performance, and with games against Huddersfield (away), Cardiff (home) and West Ham (away) coming up next, there may be more good news on the way for Spurs fans and FPL managers with Spurs assets alike, although Christian Eriksen will be missing this weekend due to a minor abdominal injury (along with Serge Aurier and goalkeeper Michel Vorm with Gazzaniga likely to deputise again as Hugo Lloris may not quite be fully fit).

We warned about owning Burnley players last week (other than stand-out performer James Tarkowski), but after their 4-0 demolition of in-form Bournemouth, we should probably have another look at the Clarets. Manager Sean Dyche is not the panicky kind and there was always a possibility that he’d get his team going again, but that he’d do it quickly, this big, and against a Bournemouth team on fire was kind of unexpected. With Cardiff away and Huddersfield at home up next, it’ll be interesting to see whether it was a one-time exception or a sign of Sean Dyche getting his ducks permanently in a row again.

Thanks to their surprise draw at home versus Chelsea, West Ham United are now placed 17th in the league, just two points above the drop zone. It looks like the Hammers are gaining some composure though, as the weekend before they took home three points from Goodison Park. Manager Manuel Pellegrini seems to have found some of the defensive stability that he’s been so desperately looking for since the start of this season. With home games against United and Spurs over the next three weeks, the expectations aren’t high at West Ham, but their last two games and the expected return of star player Marko Arnautovic who was missing last weekend due to a knee injury are reasons for some confidence.

After a surprise loss at the Etihad to Olympique Lyon in the Champions League, all eyes were on Man City to see to what extent their confidence was affected. The answer came loud and clear: to no extent. Pep’s men strode into Cardiff, lined up for a game against the local football team, and thrashed them 0-5 with some top class goals. Job done, Brighton’s next.

In defence, Kieran Trippier (£6.1m) could be raking in the points over the next few weeks. Tottenham haven’t been in great form yet this season, especially not defensively with just one clean sheet in six, but things might be taking a turn for the better for the Spurs. As the effects of the World Cup are finally wearing off, Tottenham’s mostly Belgian-English defence (2 semi-finalists in Russia this summer) should start to regain some its reliability. With Huddersfield, Cardiff and West Ham coming up, Spurs are facing teams that have scored 3, 3 and 5 goals respectively in this season’s first 6 games. Add to that Trippier’s threat from set-pieces (and Eriksen is not playing this weekend) and open-play centres, and his hefty price tag suddenly looks justified.

Despite hauls of 10, 8, and 6 FPL points in his last three Premier League games, Man City’s Raheem Sterling (£11.0m) is still owned by just 3.3% of all FPL managers. His high price and perceived rotation risk might explain this, but the Englishman looks like one of Guardiola’s surest starters. His 35 minutes against Oxford in the Carabao Cup this week indicate that he’ll likely be featuring against Brighton at home coming weekend. The Seagulls have scored just two and conceded five in three away games so far this season. Even though Brighton are usually not an easy nut to crack, you wouldn’t be surprised if Man City crack them wide open this weekend.

Up front, Alexandre Lacazette (£9.5m) is worth a mention as a potential premium pick. It looks like he’s cemented his place as the starting number nine in Unai Emery’s team, as Arsenal are slowly starting to find their form. With 2 goals, 2 assists, and a total of 25 FPL points in the last three gameweeks, The Frenchman could be on the way to something of a hot streak. It certainly wouldn’t be surprising to see him add to his totals over the coming weeks, with Watford (home), Fulham (away), Leicester (home) and Palace (away) coming up next.

Richarlison (£6.6m) isn’t really a differential in terms of the percentage of FPL teams in which he sits (16.8% currently), but that takes into account the many inactive teams for which he was selected at the start of the 18-19 campaign (3.4% of teams still own Kevin de Bruyne). Many active managers got rid of the explosive forward after his red card in gameweek 3, followed by an away game at the Emirates last weekend. The Brazilian dribbler is still great value, though. He still looked dangerous and fired at goal four times against the Gunners and if he continues being such a threat, he might well hit the target against Fulham this weekend.

After Burnley’s somewhat surprising 4-0 home victory against Bournemouth last weekend, why not jump on the wagon straight away? Johann Berg Gudmunsson (£5.9m) was one of the stars of the afternoon against the Cherries, assisting two goals, making two attempts at goal, and taking all three of Burnley’s corners. The Icelandic international provides a crucial creative spark to Sean Dyche’s otherwise rather sober team and while it remains to be seen if Burnley have definitely left their early-season woes behind them, Gudmundsson could well be up for some points against Cardiff away and Huddersfield at home over the coming two gameweeks.

Owners of Sergio Aguero (£11.4m) know what they have to do. When in form, Kun is probably the best striker in the Premier League, and he’s in form right now. He scored “just” one goal against Cardiff last weekend and he was taken off after an hour, but that was understandable considering the 0-3 scoreline. Besides his goal, the quick Argentinian fired no less than six shots in the box, three of which were on target. At home against Brighton this weekend, Aguero’s likely to bring home a decent points haul for his backers, although FPL Managers will be wary of Pep resting star players ahead of the must-win Champions League match for Man City on Tuesday in Hoffenheim, Germany.

Meanwhile, Fulham’s Aleksandar Mitrovic (£7.0) continues to defy all expectations. Admittedly, captaining him would be quite a punt, but the Serbian striker has scored 5 goals and provided 1 assist already this season. Last weekend, he scored a very subtle equaliser against Watford and he could’ve had the winner as well, had it not been for the bar. Only Aguero has made more attempts at goal as a striker than Mitrovic and he’ll certainly get opportunities to score against an unsettled Everton defence that has conceded 11 goals in just 6 games so far this season.

Or if you have an Arsenal attacker (Lacazette who scored a great goal last weekend or Aubameyang who was lucky to score) in your team then as the visiting team, Watford, need to reorganise their defence due to missing Janmaat, this could be an opportunity to make up lost ground on the teams ahead?

Keep your eye on the FPL GW7 Captain Poll for further insights into who to choose for your captain this weekend.