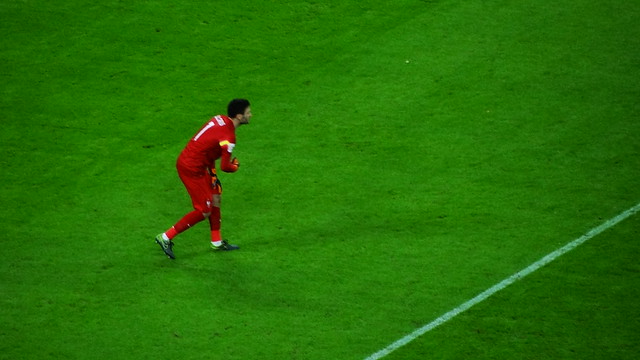 “Spurs keeper Hugo Lloris who, along with Alli, is expected to miss the home vs Liverpool due to injury in this weekend’s top match” (CC by 2.0) by Ben Sutherland

With the arrival of gameweek 5 starting tomorrow, this season’s first international break has come to an end, which means it’s time to start seriously looking at our FPL squads again. Most of the FPL teams will feel the effects of the break in one way or another. Some popular players got injured over the break, including not just the two Spurs players mentioned above but also Man United’s Luke Shaw (concussion), Bournemouth’s Ryan Fraser (knock), Palace’s Wilfried Zaha (groin) and City’s Raheem Sterling (back), whilst other players either found or continued their form while representing their country, including Chelsea’s Eden Hazard, Everton’s Richarlison and Man United’s Romelu Lukaku.

Some observations ahead of gameweek 5

Some of the most unpredictable moments in FPL take place just after the international breaks. It’s hard to know whether a player’s performance for his country is representative for the coming gameweek, while factors like travelling (particularly to South America), playing position and the team’s playing style all have an influence as well. Managers will be hoping their players are not rested and only sent on for the last few minutes which is what happened to the likes of Keita, Mkhitaryan and Kompany last gameweek meaning a miserly 1 point only and no chance of an automatic substitute.

In Brazil’s away game against tiny El Salvador, Everton’s Richarlison made his debut and did in so in style. He scored two goals, one of them a beautiful right-foot curler, to help Brazil to a 5-0 victory. He’s suspended for one more game in the Premier League, but if you still have him in your team, you’d probably do good to keep him.

Burnley crashed out of European football before the break against Greek giants Olympiakos, so their focus will be on the league now. They’ve performed below par until now, but with no European football to distract them from now on, it would be logical to see their results improve over the coming weeks. Do beware that the Clarets host United and play away at Arsenal in the coming three weeks.

Crystal Palace have become (too) dependent on Wilfried Zaha. Without their talisman, the Eagles lost at home to Southampton last gameweek. As a matter of fact, the last ten games in which Zaha failed to feature, Palace didn’t book a single victory. Keep an eye on his injury status if you have Palace players in your squad.

Finally, Manual Pellegrini is finding it difficult to field a competitive squad at West Ham this season, despite spending almost £100m on new players this summer. With zero points and just three goals scored after four games, their season start can be called disastrous. Coming up in the next five weeks are games against Everton (away), Chelsea, United and Spurs (all at home), so things aren’t looking to good for the Hammers.

Looking at the FPL statistics, the players that managers are currently bringing in most include Mitrovic, Moura, Pedro, Holebas, Hazard and Alonso (all with over 250,000 transfers in this gameweek) whilst those players on their way out of squads (all with about 100,000 or more transfers out this gameweek) include Zaha (injury), Walcott (injury), Salah (can the money be better spent elsewhere?), Mkhitaryan (after his drop to the bench with Ozil returning for GW4), Richarlison (ban), Firmino (even after finally getting amongst the goals in GW4) and Daniels (see our ‘differential’ comments below about Rico).

Eden Hazard (£10.7m) doesn’t seem to be too phased by the international break. The Belgian scored a penalty against Iceland in the Nations League, whilst he also scored in his last two Premier League games, amassing 19 points in the process. Hazard seems to feel comfortable in his role under Sarri and a home game against a sturdy Cardiff side could provide the perfect opportunity to continue his hot streak. The forward has shot at goal and created big chances 20 times in total (only Salah was more active) and Chelsea has scored at least two times in every league match up until now. With an ownership of just over 20%, Hazard could even be something of a differential captain.

This weekend’s game at Bournemouth will be marked by the return of Jamie Vardy (£8.9m) after a three-match suspension as the result of a red card. The attacker no longer features for England, so his international break was quite calm. Bournemouth has started the season in impressive fashion, but only their first game, at home against Cardiff, resulted in a clean sheet. Vardy will be raring to go against the Cherries and attacking returns could well be on the cards for him. In the 92 minutes he played this season so far, spread over two games, he did manage to score a goal. Young teammate James Maddison is developing into Leicester’s chief creator in the midfield and has impressed many pundits and Vardy might well be benefiting from Maddison’s urge to constantly feed the attack.

Our next suggestion could be considered somewhat of a slot game, but hear us out. Romelu Lukaku (£11.0m) has largely been flying under the radar so far this season, despite his three goals in four matches. The negative atmosphere that currently seems present at the club might have played a role in this. Nevertheless, Lukaku had a good international break, scoring two goals in Belgium 0-3 victory over Iceland. Add to that the fact that the Belgian is a guaranteed starter for José Mourinho and that the next four games are against Watford (away), Wolves (home), West Ham (away) and Newcastle (home) then Lukaku’s potential for points over the coming suddenly becomes a lot more obvious. With a current ownership of just 7.9%, the big striker could even function as an strong differential this weekend.

After picking out a joint top scorer in GW4 (Glenn Murray) and the 2nd best scorer in GW3 (Lucas Moura) the odds are against us in picking three in a row, particularly as we’re going for defenders this time!

With 5 points from 4 games, newly-promoted Wolves have had a decent start to the 18/19 campaign and right wing-back Matt Doherty (£4.4m) started each of those four games. In Nuno Espirito Santo’s system, Doherty is allowed plenty of freedom to roam forward and support the attack where possible, which should translate to attacking returns at some point. Wolves are relatively tight at the back though, with one clean sheet against West Ham, and next up is a still out-of-sorts Burnley outfit. The Clarets have scored just two goals so far in away games this season and with major Burnley threats Gudmundsson and Brady out injured, the home team might book a valuable result with points for Doherty a very real possibility and he’s only held by 0.8% of managers.

We’re going with another defender next, namely Bournemouth’s Diego Rico (£4.5m) who is only held by 0.1% of FPL managers. The Spaniard came over from La Liga side Leganés and made his first start for the Cherries last gameweek. Despite losing 2-0 to Chelsea, Rico showed a tremendous amount of quality at left-back and it wouldn’t be surprising if he’d remain there for the rest of the season. He wasn’t able to play in the 1st three games of the season due to a red card ban from his previous club but was always expected to take over from Charlie Daniels at LWB, although this was made easier for the Manager in GW4 due to a knee injury for Daniels. Apart from forming part of a Bournemouth defence that looks sturdier than ever, he also took six corners against Chelsea and created two big chances. With games against Leicester (home), Burnley (away), Palace (home), and Watford (away) in the next four weeks, the Spanish left-back might be in for more returns. Those still holding Daniels (which is about 11% of Managers) should consider swapping for Rico asap.

We mentioned it earlier, but Chelsea’s Eden Hazard (£10.7m) is a principal candidate for the captaincy this gameweek. With two goals and two assists the Belgian attacker has delivered attacking returns in each of his Premier League games so far, and it would be surprising if he didn’t make it five consecutive gameweeks this weekend against Cardiff at home. If you’re not captaining Aguero or another attacking City player against Fulham coming weekend, Hazard is probably the best option you have. Cardiff has conceded two and scored none so far in home games, against Newcastle at home and Huddersfield away. Chelsea is of another calibre and Hazard might well be the one to demonstrate that.

We know that we’ve suggested captaining Aguero (£11.3m) on two previous occasions already, both of which ended up in disappointment, but a home match against an attacking Fulham side is too good to pass on. Just look at this statistic: City has scored the most goals at home so far this season, namely eight, and Fulham conceded the third-most away goals, namely five. It wouldn’t be a surprise if Saturday’s game turns out to be a goal-bonanza and, if it does, Aguero is more likely to be among the goals than not.

Keep an eye on the FISO FPL GW5 Captain Poll on our forum over the next 24 hours. At the moment Aguero has 87% of the votes followed by Hazard (6%) and Alonso (4%).