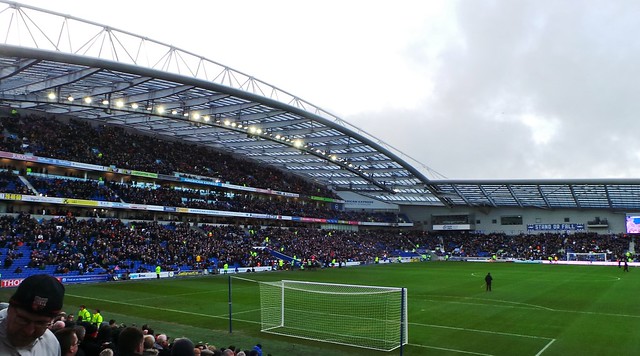 “Can Brighton continue their form at the AmEx against Fulham after the home victory over United 2 weeks ago?” (CC by 2.0) by Gareth Williams

The high weekly FPL points averages keep rolling in this season, as gameweek 3 ended with an average of 50 points. The outstanding point scorers in FPL were Spurs winger Lucas Moura, who was one of our 2 ‘differential’ picks last week and who scored two goals taking home 15 points, and Fulham striker Aleksandar Mitrovic, who scored twice and provided one assist at Craven Cottage to delight his owners with 16 points. Defenders Marcos Alonso (2 assists vs Newcastle) who was one of our 3 Premium player tips and Trippier who was also highlighted last week (1 assist and a clean sheet against United) followed with 11 points both.

Some GW3 observations ahead of GW4

In Son Heung-min’s absence, Brazilian forward Lucas Moura has made a blistering start to the 18/19 campaign, playing the full 90 minutes in the last two games and bagging three goals in the process, as well as 22 FPL points. Seeing as Son and his South Korea just made it to the final of the Asian Games (coming Saturday), which Son has to win if he wants to be exempted from 21 months of mandatory military duty in his homeland, Lucas is expected to retain his starting place and rightfully so after his performances.

Meanwhile, Burnley’s less-than-optimal start to the season keeps dragging on as the Clarets lost 4-2 away to promoted Fulham after losing the first leg of their Europa League qualifiers against Olympiakos (3-1). As a result, Burnley have taken just one point from the first three Premier League rounds. They welcome a Manchester United in crisis this weekend and their fixtures after that are attractive as well, on paper, but Burnley remains an unusually unpredictable side for now. Manager, Sean Dyche, will no doubt be working with the team to rediscover their defensive capabilities so don’t be surprised if they reel off some clean sheets again despite leaking goals in their last two EPL matches, particularly if tonight’s Europa qualifying game is their final European Cup distraction.

The frequent criticism of Liverpool’s defence last season seems to have been listened to at Anfield, as the Reds have yet to concede a goal this season. The first step was the signing of Virgil van Dijk last January, followed by the acquisition of Roma’s goalkeeper Alisson this summer and the impressive development of Alexander-Arnold at right-back. With stronger opposition facing them over the coming gameweeks, the Liverpool defence will be put the test, but one that the Reds can look forward to with full confidence. ‘Pool have played with more steel and determination this season enjoying plenty of possession thanks to the addition of more quality and confidence at the back and have shown that they could be the defensive team of the season.

Don’t let Man City‘s unexpected 1-1 draw when playing at Molineux versus Wolves be any reason for despair. Pep Guardiola’s men didn’t take home the three points, but they played their usual game. City hit the woodwork twice (Kun and Sterling), took 18 shots of which 6 ended up on target, had 72% of the possession, and made 644 passes with an accuracy of 89%. As we predicted last week, Wolves’ luck in front of goal was due to change in GW3 and they did indeed score a lucky goal against Man City.

In Northwest London, Watford are enjoying a simply magnificent start to the season, with 9 points from 3 games and a current fourth place as result. Winger Roberto Pereyra is the man in form at the moment (who we highlighted in our Watford preview), with 3 goals in 3 games, while Ben Foster, José Holebas, and Troy Deeney are interesting differential targets as well. Do keep in mind that the Hornets have had a relatively easy start to the season and that the coming five gameweeks include home games against Spurs and United, and an away game at Arsenal.

Last week, one of our top recommendations for both a transfer in and the captaincy (if you didn’t have Salah) was Kun Aguero (£11.3m), after his hat-trick performance a week earlier during the 6-1 demolition of Huddersfield. City and Aguero somewhat disappointed in gameweek 3 away at Wolves, at least in terms of the result. A 1-1 draw against a promoted side is never sufficient for the reigning champion, but the Cityzens played their usual free-flowing football and the Wolves goal came after a clear handball. This weekend at home against Newcastle will likely be a return to normality as City will control the ball and attack at will, a situation in which Aguero thrives. It’s worth giving him another chance after blanking last weekend, after all he’s still the player with most shots on target (16) in the league after three rounds and you can’t expect the man to score a hat-trick every week.

Chelsea visited Saint James Park for gameweek 3, which is never an easy fixture and even less so with Rafa Benitez at the Newcastle helm. The Blues were faced with a tight Newcastle defence, and the occasional danger on the counter or from set-pieces, but they eventually got the victory, largely courtesy of an in-form Eden Hazard (£10.3m). The Belgian forward was unstoppable against the Magpies, combining with his team mates at will and dribbling past his markers for 90 minutes, and he got on the score sheet as well after converting a penalty won by Alonso. Sarri’s Chelsea looks to be improving every week, and with matches against Bournemouth, Cardiff (both at Stamford Bridge), and West Ham (away) coming up, Hazard might bring his owners more attacking returns in the coming weeks.

Considering Arsenal’s ongoing defensive frailty, it might seem odd to mention one of their defenders in this list, but we’ll do it anyway. Hector Bellerín (£5.5m and owned by about 12% of managers) is the starting right-back for Unai Emery and the manager gives him the freedom to bomb forwards when possible, which is when the Spaniard is at his best. After back-to-back losses (0-2 against City and 3-2 vs Chelsea), the Gunners picked up their first three points of the season against West Ham last weekend. Bellerín got an assist in the game and for the next game Arsenal are visiting Cardiff, the only Premier League outfit yet to score this campaign. With a League-low 2 shots on target per game so far, Cardiff away looks like an ideal moment for Arsenal’s first clean sheet of the season.

After 3 goals and 23 FPL points in the first two weeks of this season, Everton sensation Richarlison greatly disappointed his owners by being shown an admittedly somewhat harsh red card against Bournemouth. Those who are looking to replace the Brazilian straight away don’t have to look very far for an interesting option. Theo Walcott (current ownership has already increased to 14%) has been flying a bit under the radar as a result of Richarlison’s explosive start at his new team, but the English winger has started all of Everton’s games so far. In his last two games, Walcott scored two goals and provided one assist, accruing 20 points in the process. At a price of just £6.7m, and with home games against Huddersfield, West Ham, and Fulham in the coming four gameweeks, a simple like-for-like swap for Richarlison might provide your team with a major differential asset.

We probably would’ve mentioned Lucas Moura here next, had it not been that he was already highlighted last week, so we’re going with Brighton’s Glenn Murray (£6.5m) instead this week who is only owned by 1% of managers. Admittedly a personal FPL favourite, Murray has started the 18/19 season relatively well. He has played 90 minutes in every game so far and he already has a goal to his name, as well as 9 FPL points. What needs to be taken into account is that Brighton’s first three games were against surprise package Watford, Man United and Liverpool. The Seagulls are now welcoming Fulham, who have conceded 49 shots and 7 goals in three games already this season, before visiting a rather colourless Southampton after the international break. With a price tag of £6.5m in FPL, Murray looks like a stand-out option with potential for the third or even second striker spot in your squad. Managers are tending towards Fulham’s Mitrovic (£6.6m) instead as his ownership is now up to just over 12% or Callum Wilson (£6.2m) of Bournemouth at 14% but they both have harder fixtures in the next two gameweeks.

Our reasoning for including Aguero as a captaincy candidate after already mentioning him earlier on and last week as well, as both a premium pick and a captain, is the same as it was for including him in this week’s premium picks. The Argentinian striker blanked last weekend against promoted Wolverhampton, after scoring a hat-trick at home against Huddersfield a week earlier, but he could’ve easily enjoyed attacking returns last weekend as well, as it rained chances as usual. At home versus Newcastle is not likely to be a walk-over, but it wouldn’t be odd to see Aguero score a goal or two. Keep an eye on the situation in regard to Gabriel Jesus to be sure, but Kun should be starting and captaining him would be logic.

The other captain pick has also been mentioned earlier, namely Eden Hazard, another of this week’s premium picks. The Blues are welcoming an in-form Bournemouth team with an unusually tight defence, but Hazard looks set for another Man-of-the-Match performance nevertheless. The Belgian forward was excellent at Newcastle and, in fact, the player with most touches in the opposing penalty area over the last gameweek. He scored his first goal of the Premier League season last weekend (and shown he is the number 1 penalty taker and not Jorginho) , adding to his two assists from the earlier two gameweeks. With two home games against Bournemouth and Cardiff coming up, and an FPL ownership of just 14.6%, Hazard could be a points magnet, a great differential and a good candidate for captains armband for the near future.