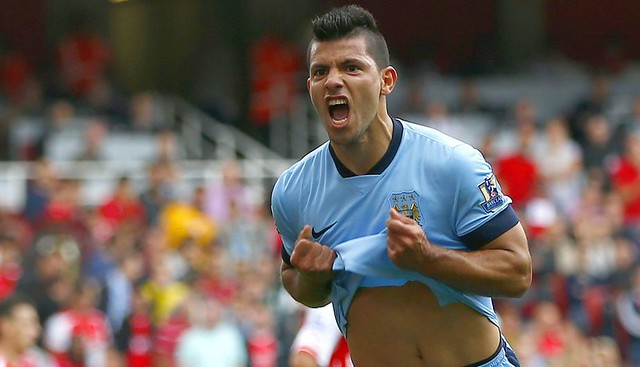 “City’s Kun Aguero is on fire after his hat-trick against Huddersfield” (CC by 2.0) by Oskar

The first two gameweeks of the 2018/19 FPL campaign have yielded averages of 53 (week 1) and 60 (week 2), which is extremely high. Where the first week of the season was dominated by defenders, week two was marked by yet another Kun Aguero hat-trick, an excellent Neil Etheridge in the Cardiff goal and a bunch of players from both big and smaller teams reaching double digits, including Henrik Mkhitaryan, Theo Walcott, and Bournemouth’s Steve Cook. Players now owned by more than 25% of managers in FPL are, in descending order, Salah, Aguero, Richarlison, Mane, Firmino, Zaha, Kane, de Gea, Mendy and Alonso (with Trippier, Kante and Neves getting close to 25%). Three of these mentioned have the most amount of bonus points after 2 games (5 out of a maximum possible 6) – they are Richarlison, Mane and Alonso. Fraser of Bournemough is next best on 4 bonus points with a large number of other players on 3.

Some GW2 observations ahead of GW3

Apart from its high entertainment value, last weekend’s Chelsea game versus Arsenal gave us some interesting indications as to what the new manager of each club is working towards in terms of tactics, formations, and playing styles. For FPL managers the new, more advanced position of N’Golo Kanté in Sarri’s Chelsea could be of interest. Sarri has give him much more freedom to roam forward on the basis he is quick enough to get back and defend. The £5.0m midfielder already has a goal to his name and could have had an assist or two as well. Based on this one would expect his fantasy points haul to be more than last season and almost 23% of managers already have him in their squad. As an aside, Ross Barkley (£6.0m) must have been pleased with his own performance, until substituted for Mateo Kovacic (£6.0m) newly arrived on loan from Real Madrid, and then dismayed at how Kovacic showed how a world-class midfielder should perform. Loftus-Cheek must have also not enjoyed Saturday after not making the bench and seeing how easy Kovacic made the game look – both players are owned by approx. 1% of managers so we think some adjustment will happen to these figures over the next few weeks.

At Spurs, right-back Kieran Trippier (£6.0m) seems to have nailed down his starting spot, especially after scoring a brilliant direct free-kick against Fulham. Taking his free-kick goal for England against Croatia about a month ago into account, it looks like Trippier (owned by about 24% of managers) has really become somewhat of a specialist. While this is good news for his owners in FPL, it may have a negative effect on £9.5m Christian Eriksen‘s set-piece responsibilities, as it would reduce the Dane’s involvement and points potential. Eriksen is currently owned by almost 14% of managers so this could drop slightly over the season (until Kane goes on a goal-run of course).

Though his position under Jürgen Klopp might be a bit too deep to really become an FPL favourite, Naby Keita (£7.5m) is still worth monitoring. The Guinean midfielder has hit the ground running in the Premier League, playing 90 and 86 minutes in the first two games of the campaign and he was arguably the best man on the pitch for Liverpool against Palace last weekend despite a silly error that almost lead to a Palace goal. He seems to have adapted effortlessly and to have cemented his spot in the heavily-contested Liverpool starting eleven. He’s a box-to-box midfielder who’s especially adapt at connecting defence and midfield and at setting up attacks up via wingers or the attackers in front of him. His price tag of £7.5m isn’t cheap but only 5% of managers have him in their squad (whereas Salah is over 50% and Mane over 30%), but keep an eye on how his positioning evolves at Liverpool especially after Klopp’s recent encouraging words for Keita to express himself more on the pitch and after Liverpool showing themselves to be more resilient defensively so he should pick up some extra 1 pointers during the season for clean sheets.

Arsenal started the season with 0 out of 6 points for the first time in the EPL, though some context is crucial here. The Gunners lost at home to City and away to Chelsea, two games that could be lost by any team in England. Especially last weekend’s Chelsea game, although lost by 3-2, showed some glimpses of the type of Arsenal team that Unai Emery wants to see with plenty of good chances to score more goals. The defence was a mess at times, but the Gunners came back from 2-0 behind and displayed a very fluent, attacking style of football at times. There’s still plenty of work to be done for Emery, but the calendar looks friendlier to Arsenal in the coming weeks and the past two games might not be a complete representation of this new Arsenal’s potential. Midfielder Mkhitaryan (£7m) and striker Aubameyang (£11m) are owned by about 16% of managers: the only ones above 10% ownership apart from defender Bellerin.

Leicester right-back Ricardo Pereira played in a more defensive position after spending a game on the right wing during the first week of this campaign. Despite this, the Portuguese defender added another assist to his tally, making it 2 assists in the season’s first 2 games. It remains to be seen whether Claude Puel will keep moving Pereira between defence and attack for the rest of the season, but the £5.0m player is rapidly becoming a viable FPL target, regardless of his actual position on the pitch due to his quality on the ball and support from a well-organised, attacking team. Wolves though were very unlucky not to score during the match and despite facing a tough home tie against Man City in gameweek 3 will fancy their chances of getting a goal.

We have no other choice but starting with Sergio “Kun” Aguero, the author of a hat-trick against Huddersfield last weekend, plus an assist and 3 bonus points. The Argentinian is already City’s all-time top scorer and last weekend’s display was actually his ninth hat-trick in the Premier League, a record only bettered by goal-king Alan Shearer (11). Kun rewarded the more than 40% of FPL players who own him with a lofty 20 points (meaning 40 points to those that captained him) and despite his price (£11.0m), this feels like one of the moments in which bringing in Kun has to be your priority as a responsible FPL manager. He usually scores in bursts and the coming games for City (Wolves away, Fulham and Newcastle home) don’t suggest that the goals are suddenly going to dry up for Aguero.

It of course remains to be seen to what extent Maurizio Sarri can be successful in transferring his attractive brand of football to Chelsea Football Club, but one of the players who doesn’t seem to be phased by the change of managers and management styles, is left-back Marcos Alonso. To be honest, the shift from a 5-man to a 4-man defence during pre-season made us doubt whether Alonso would be repeating his performances from the past two Premier League campaigns (6 and 7 goals respectively), but our doubts now seem unfounded. The defender looks like Sarri’s preferred option for the left-back position and the Spaniard has already taken home 24 FPL points, as a result of an assist, a goal, and one clean sheet in the first two games of the season. He’s one of the most expensive defenders in the game (£6.6m), but could be worth every penny is he continues like this.

Especially after his goalless display and giant miss last weekend, it might surprise some to see Pierre-Emerick Aubameyang in this list, but keep in mind what we wrote about Arsenal earlier in this piece. The upcoming games are against West Ham at home, two away games at Cardiff and Newcastle, and a home game versus Everton. The £11.0m striker has disappointed his owners so far with a meagre 4 FPL from two games, but his spot in the starting eleven seems safe and the coming games should normally see him open his account for the season. Auba is simply one of the best in the league, don’t forget this is the man who scored 10 goals and provided 4 assists last season after arriving to the Gunners during the January 2018 transfer window. So far he has come very close to scoring on a few occasions so maybe his luck will turn this weekend and your luck might turn if you try out www.slotsia.com to help you in your search for no deposit casino sites

With home games against Leicester and Brighton, and away games at Palace and Wolves coming up in the coming five gameweeks, Southampton’s schedule could look worse. Despite taking just 1 point from the season’s first two games, the Saints haven’t looked much like a team that has to fear relegation again this year, and part of that is thanks to new arrival Danny Ings. The former Liverpool striker was loaned out and opened his account for the 18/19 campaign with a goal against Everton last weekend. In just over 120 minutes of Premier League football so far, the Englishman has made 9 efforts at goal (8 of which came from inside the box), only Mitrovic and Aguero tried more often. He looks like a starter for manager Chris Hughes and at a price of £5.5m, Ings could turn into a real budget enabler and FPL differential over the coming weeks.

After his cracking goal against Fulham last weekend, mentioning Lucas Moura (£7.0m) as a differential might look a bit opportunistic, but hear us out. The Brazilian forward played 67 minutes in the first game and completed the 90 minutes last weekend, and, besides his goal, has left an overall good impression. With Son away at the Asian Games for at least a month, Moura will have to battle it out for the Korean’s spot with Lamela and Winks. For the moment, it looks like the Brazilian has come out on top for manager Pocchetino. Over the coming 5 gameweeks, Spurs are facing United away (coming weekend) and Liverpool at home, while they’ll also face Watford, Brighton, and Huddersfield (all away). This is far from an easy set of fixtures, but it could be worse as well, and with Spurs finding some of its form, more points could be on the table for Moura.

We usually don’t mention a player twice in these pieces, but after a 20-point haul last weekend, Kun Aguero is inevitable as a captaincy option coming weekend. The prolific Argentinian looks like he has encountered his top shape once again and with the likes of David Silva, Bernardo Silva, Leroy Sané, and Riyad Mahrez providing a constant supply of chances, there’s not reason why Kun shouldn’t bag another goal or two coming weekend, away at Wolves. His price is likely to rise (more) before this week’s FPL deadline, so if you’re going to bring him in, you better do so sooner than later.

It seems to be becoming somewhat of a tradition to name a Liverpool player as a viable FPL captain whenever the Reds play at home, but that’s just because they score so much. We mentioned the inevitable Mo Salah last week (if you have him, he’s a major captaincy candidate as he’s playing at home whilst Aguero is away!) although he didn’t look at his sharpest in the win at Crystal Palace despite getting two assists, so we’ll go with the man on the other side, Sadio Mané. The Senegalese forward started the season in fashion, with 3 goals and 5 FPL bonus points after the first two gameweeks, and it wouldn’t be surprising to see him stand out again against Brighton at Anfield coming weekend. He’s currently the official game‘s highest scorer (26 points), his price has already risen by £0.3m, and this weekend’s opponents allowed for a worrying (for them) 25 shots during their last away trip, to Watford. A Liverpool goal bonanza could be on the cards.