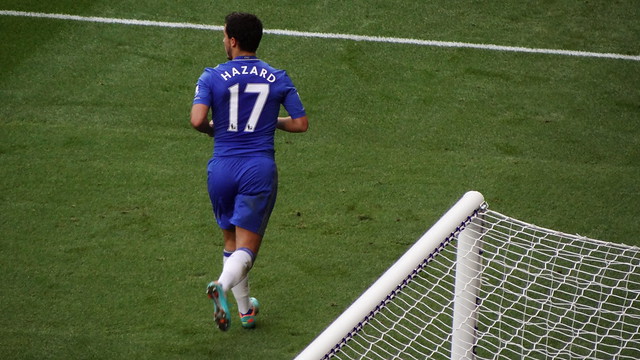 “Will Chelsea’s star man start for Sarri’s Chelsea this weekend?” (CC by 2.0) by Ben Sutherland

The 2018/19 Premier League season kicked off with an unexpected number of clean sheets over the first gameweek, which resulted in a few high-scoring defenders. City’s Mendy, Watford’s Holebas, Palace’s Wan Bissaka and Schlupp, and United’s Shaw all scored 11 points or more, while the week’s top performers in terms of FPL points were Watford’s Roberto Pereyra (previously highlighted in our Watford preview article) and Liverpool’s Sadio Mané, with 16 points each. In the build-up to gameweek 2, we’ll take a look at some significant potential player price changes and we’ll highlight some players that could be bringing home the points.

Players like Chelsea’s Jorginho, Liverpool’s Mané, Everton’s Richarlison and Wolverhampton’s Neves have already seen their price rise after their displays during the first gameweek, while previous FPL favourites like Tottenham’s Son (away at the Asian games) and United’s Phil Jones have started their new campaign with a price decrease.

Man City’s Bernardo Silva, who scored a goal and took home 8 points last weekend, is likely to see his price rise before the coming FPL deadline and it wouldn’t be surprising to see Sadio Mané’s price rise once more as well, after his man-of-the-match performance against West Ham. After a somewhat underwhelming season opener away at Newcastle, Spurs are facing Fulham at home this weekend, so the prices of Dele Alli and Christian Eriksen could be in line for a rise as well.

In terms of falling prices, Man City’s man of the season last year Kevin de Bruyne is likely to see his price drop over the coming weeks after picking up a knee injury during training (although initially he may be protected from a price fall as his sales would be injury related). Managers certainly don’t want a large amount of their budget tied up with someone on the sidelines. He might be out for more than 2 months depending on the results of tests, which would mean a serious blow to Pep Guardiola’s outfit if they are to claim both the Premier League and Champions League this season. Players like Nicolas Otamendi, Jesse Lingard and Dejan Lovren (who appeared in the World Cup final) could see their prices decrease as well, though it’s likely their involvement will grow significantly over the coming few weeks.

Eden Hazard is destined to become a key player in Maurizio Sarri’s Chelsea, something that the Belgian emphasised last weekend against Huddersfield, when he came off the bench in the 76th minute and provided the assist for Pedro’s goal in the 80th minute. Hazard seems sufficiently rested to be in the starting line-up from next game onwards and don’t let the coming fixture against Arsenal fool you. The Belgian has scored in three of his last five matches against the Gunners at Stamford Bridge and the calender is kind to the Blues after that: Newcastle away, Bournemouth and Cardiff at home, and West Ham away. At a price of £10.5m, he could be an excellent pick and candidate for the captaincy of the coming weeks.

After point hauls of 218 and 199 FPL points in the past two Premier League seasons, Christian Eriksen‘s ownership percentage of 16.9% is still relatively low. He had a quiet game against Newcastle last game as far as points were concerned, but no other player created more chances than the five created by Eriksen that game. With a home game against Fulham coming up, the Danish midfielder might very well convert those underlying stats into FPL points. As mentioned before, he’s as much of an FPL certainty as you can wish for and his price might be in line for a rise sometimes soon, so if you want to snap him up at £9.5m, now is probably the time.

With an away game at Palace and a home game versus Brighton coming up, the popularity of Liverpool assets is unsurprisingly rising, especially after their 4-0 thrashing of West Ham last weekend. Basically all three of Liverpool’s attacking assets look like guaranteed points magnets at the moment, but considering his 16-point haul last weekend, we’re picking Sadio Mané. The Senegalese winger has already seen his price rise by £0.1m this week and deservedly so, after scoring 2 goals and winning 3 bonus points in the process. Away at an improved Palace side is another opportunity to get a good score, so consider Mané (£9.6m) if your budget doesn’t allow for bringing in Momo Salah.

Leicester’s new acquisition Ricardo Pereira lost his first Premier League game, away at Man United, but left a good impression, for both his manager Claude Puel and FPL managers around the world. The Portuguese right-back played as a right-midfielder/winger and provided Jamie Vardy with an assist in the 90th minute. It remains to be seen if Puel will keep deploying Pereira is such an attacking role, which in combination with his £5.0 price tag would make him a player that should definitely be on your watchlist. Leicester played some very good football against Man United and if they keep playing like that should comfortably finish in the top half of the table at the season end.

With a price of £11.0 and a points total of 229 in FPL last season, it might seem surprising to mention City’s Raheem Sterling as a differential, especially after his goal against Arsenal last weekend. Still, the England attacker is currently owned by just 3.1% of FPL managers. Sterling seems to be one of the players that is most proof to Guardiola’s rotational tactics and he’s often deployed as a shadow striker to support Aguero or Jesus in the number nine spot. With home games against Huddersfield, Fulham, and Newcastle and an away game at Wolves, coming up between now and gameweek 5, Sterling might well be racking in the points over the coming weeks. His price is steep, but at such low ownership, he could give your FPL squad a real advantage in your (mini-)leagues. If Sterling is not your cup of tea then to ensure you have Man City coverage consider either i) Bernardo Silva instead whose place is less likely to be under threat if de Bruyne is out injured long-term particularly after his excellent performances in the win against Chelsea in community shield and the win against Arsenal at the weekend or ii) Benjamin Mendy the marauding left back who had two assists and a clean sheet at the weekend who if picked by Pep is likely to pick up more assists or goals given his tendency to play as an attacking winger rather than a defender – Pep will have to help him get the balance right.

On the basis of last season and the fact that he seems to be simply continuing where he left off last season make Mo Salah an obvious captain candidate. The Egyptian winger is the official game’s most-owned player (54.7%), despite his £13.0m price tag. He opened the score in the 19th minute against West Ham and had several chances to add to either his goal or his assist tally or both. After a disappointing World Cup, Salah looks ready to lead the Liverpool attack again this season, and you can expect his price to rise to unseen heights if he scores again against Palace this weekend. With such a high ownership and an opposing defence that allowed for plenty of chances against Fulham last weekend, can you afford not to captain Salah if you have him?

Fulham is an attacking outfit that play to create chances, but as a result also concede a significant amount of chances every game. Considering this fact, the ideal captain this week could be part of Tottenham’s attack, who host the Cottagers this weekend. We’ve already outlined the potential of Christian Eriksen for this game, who is an outstanding candidate for the captaincy, but Dele Alli (£9.0) shouldn’t be forgotten either. The young Englishman got off the mark by scoring his team’s second goal last weekend to bring home the three points and it wouldn’t be strange to see him on the scoreboard again coming weekend. His ownership of just 6.2% makes him very much a differential captain pick, though neither his performance last week nor his points total last season of 175 suggest that he should fly below the radar. Quite the opposite!