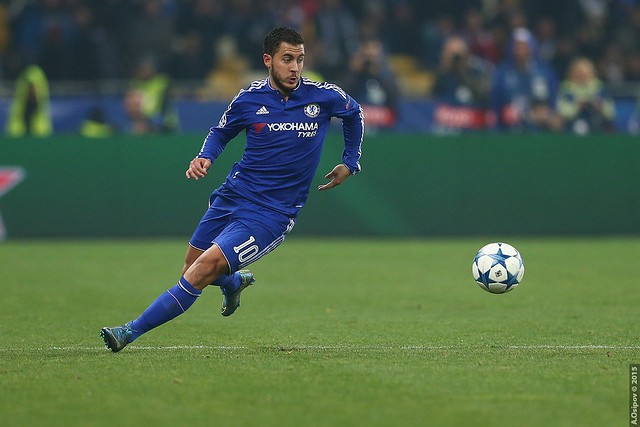 “After a few disappointing gameweeks, is Eden Hazard delivering at home to Fulham this weekend?” (CC by 2.0) by Aleksandr Osipov

Now that the Champions League group stage has reached the decisive and final round and with only Man City and Man United sure of qualification for the knockout stages, the words on the minds of many FPL managers this weekend will be “rotation risk”. Nonetheless, the coming weekend offers plenty of attractive fixtures as Liverpool, Chelsea and Man City all play home games that could end up being full of goals. Arsenal are also playing at home, but they are hosting an improving Spurs side for a derby match that could go either way. We’ll take a look at some interesting facts from last weekend and the mid-week Champions League games before moving on to our picks for gameweek 14.

Some observations ahead of gameweek 14

First of all, the Champions League. Pep Guardiola’s love for player rotation could drive any FPL manager crazy on any regular Saturday afternoon, so the fact that Man City turned up in their strongest formation versus Olympique Lyon yesterday could have devastating consequences. Or not. What we know is that Sterling (90 minutes), Sané (71 min), David Silva (90 min), Mahrez (90 min) and Aguero (90 min) started, with especially the first three having been in exceptionally good form these past few weeks. So will Pep rest some of these players? As usual, it’s hard to say, though rotation risk is slightly reduced by the current injury worries surrounding Bernardo Silva and Gundogan. It’ll come down to your own assessment of form, fixtures, fitness, and Pep’s thoughts , so good luck with that.

The Reds from Manchester also played in Europe last weekend, hosting Swiss minnows Young Boys. José Mourinho opted to start without Paul Pogba and Romelu Lukaku, while the seemingly discarded Alexis Sanchez wasn’t even on the bench. In the 65th minute, Lingard and Fred made way for Lukaku and Pogba, and seven minutes later yet another injury to right-back Valencia meant he was replaced by Juan Mata when perhaps Fellaini was about to be taken off. Luckily Man United forced a 90th-minute winner through Fellaini (assist Lukaku), which sent the Red Devils through to the next round. In the light of this weekend’s game at Saint Mary’s, FPL managers with United assets won’t have to worry too much about rotation risk. It should be taken into account that in-form Anthony Martial played the full 90 minutes against Young Boys, but that’s about it.

Meanwhile, a new wind is blowing through Craven Cottage and it could have an impact on FPL management all over. Manager Slavisa Jokanovic was replaced by none other then miracle man and fan favourite Claudio Ranieri after losing 7 in a row, conceding a whopping 31 goals in just 12 games. The Cottagers promptly beat Southampton. Over the first few months of the 2018-19 Premier League campaign, a tendency to bet big on teams facing Fulham has developed, but this could be over soon. Ranieri is aiming to bring better tactical discipline and awareness to the team, as well as more defensive solidity. Sure, it will take some time for the Italian coach to mould his new team into a coherent unit, but it looks like Fulham won’t be the league’s whipping boys any more.

The position in which Fulham find themselves at the moment, which is last, is one that had become all too familiar for David Wagner and his Huddersfield Town. Currently though, the Terriers are in 15th place with 10 points after starting an unbeaten streak in gameweek 11 that has extended to three matches after last weekend’s emphatic win over Wolves (0-2). The 1-1 draw at West Ham the week before and the 1-0 victory over Fulham the week before that have put Huddersfield two points above the drop zone. They’ll be hoping to remain unbeaten for a fourth consecutive time against Brighton at home this weekend. To say we should all flock to Huddersfield assets ASAP now would be exaggerated, but the likes of playmaker Aaron Mooy (highlighted by us as a potential differential captain pick in gameweek 11) who scored a double in his last match, central defender Zanka, and midfielder Billing could be interesting budget-enabling differentials.

Do also keep an eye on the fiso forum gameweek 14 transfers topic for more ideas.

We have just said that Fulham will soon no longer be the Premier League’s whipping boys, but this doesn’t mean that their away game against Chelsea this weekend isn’t looking like an extremely plum fixture for Eden Hazard (£11.1m). The Belgian Blues star has had a few inconsistent weeks of late as a result of a nagging ankle injury, so the home game versus Fulham could be the perfect opportunity for him to show the world that he’s still the best in the Prem. Chelsea have won 4 out of their first 7 home games this season, scoring 15 goals in the process. Of those 15 goals, Hazard was directly involved in 7 (5 goals and 2 assists) despite not playing more than half an hour in two of those home games. Possibly more interesting though, is the fact that all of Hazard’s goals were scored when Olivier Giroud was on the pitch, who the Belgian recently described as “the best target man in the world”. From an FPL perspective, Hazard is obviously more much decisive when playing with Giroud than with Morata, so keep an eye on the starting line-up for the Thursday game against PAOK.

As mentioned earlier, Man City’s starting line-up for this weekend’s home game against Bournemouth is hard to predict, but we still feel one of this week’s premium picks should be a Cityzen. From Aguero, Sané, D. Silva, and Raheem Sterling (£11.3m) we’ve eventually chosen to go with the latter. The young Englishman is back on fire, scoring 3 goals and providing 5 assists over the past four Premier League games, with 45 FPL points as a result. The current highest-scoring player in the official fantasy game (95 points) played the full 90 minutes against Lyon yesterday, so rotation is rearing its ugly head here, but can Pep really leave out a Sterling in such form? Additionally, the injury doubts for B. Silva and Gundogan (both given a 75% of playing by FPL) should reduce the rotation risk somewhat.

Our final premium pick of the week will be starring in the Merseyside Derby coming Sunday afternoon, as Liverpool host Everton for what surely will be entertaining encounter. The rivalry between the Reds and the Toffees, as well as the importance of this derby, are common knowledge for FPL managers, and Liverpool are expected to line up in their strongest formation. That means Momo Salah (£13.0m) will be starting at Anfield, which also makes him a captaincy option. The Egyptian forward has scored 4 goals and given 2 assists in his last five Premier League games, totalling 41 FPL points over that period. Salah started for the Reds in Paris against PSG on Wednesday night for an all-important clash in a Champions League group, but Salah looks set to start versus Everton.

Our first differential pick of the week is Leroy Sané (£9.3m), whose price tag might not make him affordable for everyone, but whose current ownership (6.1%) could make a huge difference for you. Over the past three gameweeks, the German youngster played the full 90 minutes twice and recorded an impressive 34 FPL points over that period (3 goals and 3 assists). With Mendy out for the foreseeable future, his spot will be covered by the less offensive Delph or Zinchenko. This means that Sané will be taking up much of the attacking responsibilities in that time, as Guardiola has asked from him in the past. He was taken off after 70 minutes mid-week versus Olympique Lyon, so we expect him to start on Saturday at home versus Bournemouth, especially considering his current purple patch.

Dutch wing-back Patrick van Aanholt (£5.4m) is our other differential pick this week. Like Sané, the Crystal Palace defender is not the most budget-friendly option, but his ownership of just 3.7% makes him a tempting option in the run-up to the home game against struggling Burnley this weekend. Palace are far from playing free-flowing football and booking comfortable victories themselves, which is illustrated by their current 16th place in the league, but this should be seen in the right context: the Eagles faced Everton, Arsenal, Chelsea, Spurs, and United in their last five Premier League games. Roy Hodgson’s men are not a bad outfit, but they are lacking some confidence and a serious goal threat apart from talisman Wilfried Zaha. Against a Burnley side who have taken a meagre 2 points from their last 5 games (in which they scored just 4 goals), Palace have the chance to get back to winning ways. In total, Burnley have scored 6 goals in 7 away games, so a clean sheet is definitely possible, and in the case of Van Aanholt, some attacking returns are as well.

Thanks to the fixture calendar, each of our three premium picks this week, as well as differential pick Leroy Sané, has serious captaincy potential. Considering Hazard’s slight injury worry and the fact that we’ve mentioned him as a stand-out premium pick already, we’re recommending a team mate of his here instead: Marcos Alonso (£7.1m). The Chelsea wing-back is the official fantasy game’s highest-scoring defender and the game’s second-highest scorer overall (87 points), with only Raheem Sterling earning more FPL points over this season’s first 13 games. Alonso brought home 36 points over the past four gameweeks, courtesy of 2 assists and 2 clean sheets in that period. Those performances also earned him 5 bonus points. The Spaniard will have space and time to bomb forward at home to Fulham this weekend, while a Blues clean sheet isn’t unthinkable either.

When it comes to Man City, we’ve covered Raheem Sterling and Leroy Sané already in this piece. Seeing as a Man City attacker should be involved in this section with a home game versus Bournemouth on the cards, we’re highlighting David Silva (£8.6m) this time. The Spanish playmaker has been excellent so far this season and he’s been exceptionally prolific over the past month or so, as well. The original Silva has scored a goal in each of his last three Premier League games (Southampton home, United home, and West Ham away), bagging a decent 3 bonus points and 25 points overall in that period. He did play the full 90 minutes against Lyon on Tuesday, but Pep is likely to start him on Saturday after three days of recovery. What adds to David Silva’s FPL appeal is the fact that his ownership currently stands at just 10.8%, making him somewhat of a differential.