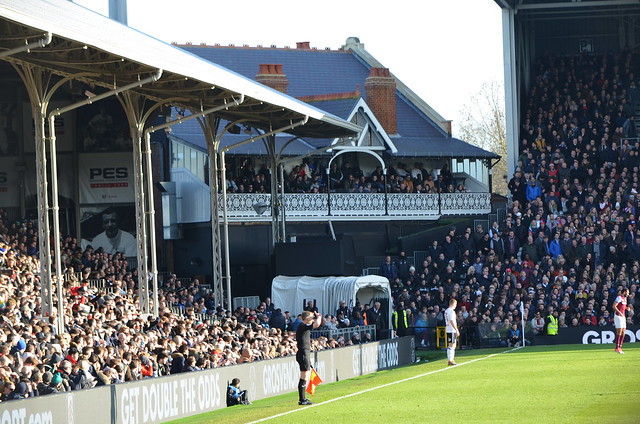 “Fulham’s Craven Cottage, currently the second-most porous homeground in the Premier League” (CC by 2.0) by Nick

We probably speak for a majority of FPL managers when we say that gameweek 9 was something of a disaster. The only players with a total ownership of more than 10% who made it into the Team of the Week were Everton’s Jordan Pickford (13.5%), City’s Benjamin Mendy (16.6%), and Arsenal’s Pierre-Emerick Aubameyang (11.3%). The highest-scoring players though, were the previously mentioned Pickford with 15 points, United’s Anthony Martial (15 points with an ownership of 2.6%), and City’s Fernandinho (14 points with an ownership of just 4.8%). Most of the big FPL names either provided reasonable but limited returns (Salah, Aguero), no returns (Hazard, Lacazette, Kane), or, due to Champions League requirements, didn’t even start (Sterling, Mané, Firmino). In other words, let’s forget about last weekend and look forward to gameweek 10!

Some observations ahead of Gameweek 10

Last weekend, Arsenal made it 10 consecutive victories in all competitions after overcoming a positive Leicester City side. The Foxes had the best of the game during the first 45 minutes and were close to getting a penalty after Rob Holding handled the ball in the area. It was a Hector Bellerín own goal around the half-hour mark that gave them the lead at half time though. A different Arsenal came out of the dressing room as the Gunners pinned back Leicester and went from 0-1 behind to winning the game 3-1, courtesy of two Aubameyang goals and a stellar display from Mesut Özil. Arsenal have much to improve still, especially defensively, but by continuing on the current path, Arsenal might soon be joining the race for the title.

These days it’s impossible to speak of defensive frailty in the Premier League without mentioning Fulham. The Cottagers have returned to the elite this season in admirable fashion, playing an attacking and entertaining kind of football, just like manager Jokanovic likes to see it. Besides the somewhat disappointing 5 points from 9 games so far, this approach has also resulted in no less than 25 goals conceded, which is simply too much to stay up. At this pace, Fulham will be picking the ball from their own net for the hundredth time before the end of the season, which would be inexcusable.

Last weekend’s 4-2 loss to Cardiff, who had up until then just scored 4 goals in 8 games, will have deeply worried Fulham fans, and with games against an in-form Bournemouth and Liverpool coming up in the next three, things look a bit grim for Fulham.

Over in Manchester, much of the focus is either on City’s non-stop goal production or José Mourinho’s antics at United, but City’s five clean sheets in a row is a feat that’s passing somewhat under the radar. Since conceding a goal against Newcastle in gameweek 4, Guardiola’s men have kept clean sheets against Fulham, Cardiff, Brighton, Liverpool, and Burnley. Combine that with the return of midfield maestro Kevin de Bruyne and assist machine Ben Mendy, as well as the scintillating form of players like Mahrez and Bernardo Silva, and it doesn’t seem like the City bulldozer is coming to a halt any time soon. Only Gabriel Jesus seems to not be quite able to get himself points.

After losing 0-1 at home to Brighton, Newcastle United are now bringing up the rear in the Premier League, with a very meagre 2 points. Though it’s hard to speak positively about the Magpies these days, the score against Brighton last weekend doesn’t say it all. Rafa Benitez’ team had more than 65% of the ball possession and an impressive 27 shots on goal, but it was their finishing that was extremely lacking. With their schedule now easing up considerably for the foreseeable future, it’s not unthinkable that we’ll see Newcastle recovering from what has been an abysmal start to the 2018-19 Premier League campaign.

Our first premium pick of this week is Liverpool’s star man Mohamed Salah (£12.8m) for two very simple reasons: he has the fixture and he seems to be now more on the form as well. The Egyptian winger scored a brace in the 90 minutes he got against Red Star Belgrade in the Champions League on Wednesday and is likely to start against Cardiff at home on Saturday. The Reds have scored 8 goals and conceded none at Anfield, while Cardiff have conceded 7 and scored just 1 in four games. It looks like it’s going to be a one-sided affair in Liverpool this weekend, the perfect opportunity for Mo Salah to truly live up to his price tag.

Our second premium pick of the week is kind of an obvious one, after scoring back-to-back braces against Fulham and Leicester over the past two weekends. Pierre-Emerick Aubameyang (£10.8m) did so in just 57 minutes of football, coming off the bench on both occasions to bring the victory home. We’d almost forget that he also provided an assist in that short period of time, bringing his FPL total for the last two gameweeks to an incredible 27 points. The Gabonese striker will be facing Crystal Palace this weekend, whose defence has been far from frail at home, but who still have conceded 5 goals in 5 games. Against a Gunners outfit that only seems to be improving week in, week out, the Eagles might be in for a beating and Aubameyang could be delivering the punches.

The encounter between Leicester and West Ham at the King Power Stadium coming Saturday is promising to be one rich in goals. Jamie Vardy (£8.9m) might not have played his luckiest game against Arsenal last week, but you’d bet on him to bag a goal or two versus the Hammers. Leicester have scored 7 goals in 4 home games so far, while West Ham have been porous on the road, conceding 9 goals in just 4 away games and will be missing one of the star players, Yarmolenko, due to a serious ankle injury last weekend. Vardy has scored 3 goals and given one assist in the seven games in which he has participated so far this campaign, and he has Cardiff (away) and Burnley (home) coming up after West Ham. In other words, the Englishman is a good pick but do check if he has recovered from illness during the week.

Cedric Soares (£4.4m) is probably one of the more under-rated players in the Premier League. The Southampton right-back is a pretty constant performer for a team that has been somewhat hard to define this season and with a price of just £4.4m, he’s an excellent fourth or fifth defender in the official game. In both games in which the Saints kept a clean sheet this season, Cedric brought home maximum bonus points. Those six points are in fact equal to the bonus points collected by the entire Southampton defence (including goalkeeper) so far this season. His 9-point haul last weekend must have delighted the 4.8% of managers who own him and more defensive returns could be in the making when low-scoring Newcastle make their way Saint Mary’s on Saturday.

Watford’s Roberto Pereyra (£6.2m) has undoubtedly frustrated more than one manager this season with his inconsistent returns. His two goals in the season opener versus Brighton catapulted him to the top of many wanted-lists, but despite Watford’s continued good form, the Argentinian dribbler largely failed to produce. His 8-point haul last weekend was just the third time he scored more than two FPL points, after scoring in this season’s first (2 goals) and third fixtures. Watford have been high up and low down at times this season, but they always seem to be able to score and Pereyra is the midfielder most likely to benefit from that. With Huddersfield, Newcastle, and Southampton coming up in the next three games, now might be when he displays an extended streak of good form and attacking returns.

Even though Eden Hazard (£11.4m) greatly disappointed in FPL terms last weekend, we feel we simply have to mention him as a prime candidate for the captaincy this weekend. The Belgian magician is human, after all. With an away match against Burnley coming up on Sunday, Hazard is one of this weekend’s most attractive options for the armband. The Clarets have recovered from their sub-par start to the season, but they’ve still let in 6 goals in 4 home games, while Chelsea scored 8 in 4 away games. With two goals and two assists, Hazard was directly involved in 50% of those away goals. Keep an eye on developments surrounding his slight back problems, but if you have him, he should probably get the captaincy this week and he was rested in their Europa Cup match on Thursday night.

Our second captaincy suggestion is a bit more of a differential in Bournemouth’s Callum Wilson (£6.4m). The English forward is having a great season so far, with 3 goals and no less than 7 assists in 9 games, and on Saturday he’s rolling up to Craven Cottage, home of the Premier League’s worst defence. While Bournemouth currently boast the league’s fourth-best attack (16 goals) and have created the most big chances (29) after Man City, Fulham have the conceded a staggering 25 goals and 27 big chances, a league high as well. Let’s put it this way: a 0-0 draw seems very unlikely.