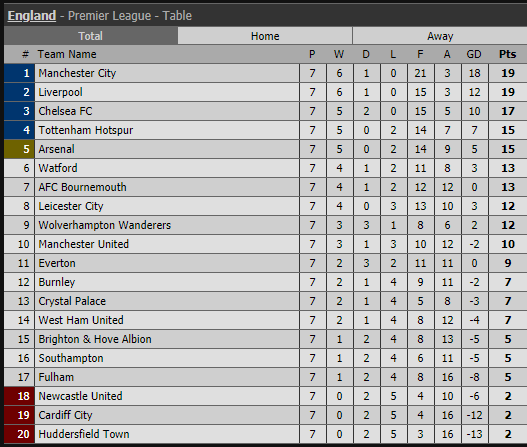 With this season’s second international break coming up after gameweek 8, this weekend, we’re taking a look at the list of fixtures coming up. By now you probably have a good idea of what the 2018-19 Premier League is going to look like, which teams will be competing for the title, and which players have hit the ground running this season. As the ‘wildcard season’ may be considered by FPL Managers around the international break, we’ll be taking a look at the coming run of fixtures for each Premier League outfit in order to determine their difficulty and help you with planning gameweeks 8 to 12.

Yesterday we looked at the fixtures for the top 10 clubs and now it’s time for the bottom 10 in the EPL where we’ll try and identify which clubs you should avoid given their run of harder fixtures and those clubs where you should be considering bringing in players due to their bonus run of fixtures.

Everton are one of two teams that played in the League Cup on October 2nd, losing on penalties against Southampton which at least makes it easier for them in the EPL. Everton have been a bit up and down so far this season, with an 11th current position as a result (9 points out of 7 games). Three of the upcoming five games are against rivals that are currently higher up the table (Leicester, United, and Chelsea) and all three of those games are away games. The home games offer more potential for points though, with Palace and Brighton visiting Goodison Park. The away games versus Chelsea and United seem out of reach, but the other games could yield some positive results, on condition that the Toffees keep improving, and players such as Richarlison, Sigurdsson and Gueye stay fit.

Thanks to a horrible opening of the season, Burnley have only the Premier League to focus on by now. Their Europa League adventure was cut short by Olympiakos, while Burton knocked them out of the League Cup. That’s not bad news for FPL managers though, because the Clarets do offer some FPL pedigree, with players such as Gudmundsson, Tarkowski and Barnes. The club are facing top six rivals in weeks 9 and 10, while an away game at the King Power in week 12 can be considered difficult as well. This weekend’s home game versus Huddersfield and the week 11 away game against West Ham show most potential for Burnley, though the Hammers look like they’re starting to improve after a tough beginning to the 18-19 campaign.

With two victories and a draw from the first seven games, Palace’s start to the season has been nothing special. The Eagles are a mid-table team on paper (partly thanks to star-player, Zaha), but they’ll be hoping to find themselves a few spots up the table at the end of the season. The coming two gameweeks especially offer opportunities for Palace to add to their current 7 points (and 5 goals scored), with Wolves visiting Selhurst Park before Palace visits Everton, who have conceded 5 goals in 4 home games so far, in gameweek 9. After that, the going gets tough for the Eagles, as they consecutively face Arsenal, Chelsea and Spurs in the Premier League. On top of that, in the Carabao League Cup they’re going to Boro in gameweek 11, a game Palace will want to win.

It looks like Manuel Pellegrini and his West Ham side have finally found their feet and are ready to start performing more like a club that spent £100 million just last summer. An away victory over Everton in mid-September was followed by a home draw versus Chelsea, an 8-0 thrashing of Macclesfield in the League Cup, and an impressive 3-1 victory over an uninspired Man United last weekend. The Hammers will hope to continue this good form this coming weekend at the AmEx in Brighton. The Spurs and Leicester games in weeks 9 and 10 seem like a bit too much for West Ham, but they’ll be gunning for six points against Burnley at home and Huddersfield away after that. With players like Arnautovic, Fabianski and Tomkins, the Hammers could and should do better than their current 14th place.

Purely in terms of upcoming fixtures, Brighton has one of the most favourable schedules. The Seagulls are out of the League Cup after losing to Southampton at home in the second round, so manager Chris Hughton can put all his efforts into keeping the Albion in the Premier League for another season. On paper, the away game at Everton is the most difficult encounter, but the Toffees haven’t made a special impression at home so far this season (4 games, 2 wins, 2 draw, and 5 goals conceded). Against all of the other teams, Brighton fans and players alike will be disappointed if they don’t take home at least a point. Especially the games against West Ham, Newcastle, and Cardiff are crucial in the early season’s battle to avoid the relegation spots, and Brighton can go into those games with confidence.

Southampton edged out Everton on 2nd October on penalties in the Carabao League Cup and they will return to play in the tournament sometime during gameweek 11 away to Leicester. After narrowly avoiding relegation last season, it looks like Southampton will be facing a tough campaign again this year. The only win so far this season came at the expense of Crystal Palace at Selhurst Park, the only other two points were the results of home draws against Burnley and Brighton. Apart from Newcastle in gameweek 10, the Saints are facing only rivals from the top half of the table. These include two title candidates (Chelsea and City) and two of this season’s surprise performers (Bournemouth and Watford), so the coming weeks might well get quite tough for Southampton.

As a recently promoted side, Fulham won’t be overjoyed by the current 17th spot in the Premier League, but they’ll still be happy to be above the relegation spots. The team managed by Slavisa Jokanovic is determined to play its own style of attacking football, which explains the 8 goals they’ve scored and the 16 goals they’ve conceded in this season’s first 7 games. With just 1 point and 11 goals conceded so far, it’s their away form that should worry fans and management alike the most. In theory, the games against Cardiff, Huddersfield (both away), and Bournemouth (home) have potential for goals, points, and FPL points. Still, Bournemouth are playing exceptionally well at the moment, while Fulham’s away form was mentioned just a moment ago. Add to that the League Cup encounter at the Etihad in gameweek 11 and the Cottagers are looking at a difficult run of fixtures.

With Newcastle, we’ve come to the first of the Premier League’s three relegation spots. The Magpies made little investments last summer and have been considered a candidate for relegation by many experts before the 18-19 campaign even got under way. They were eliminated from the League Cup by Nottingham Forest, which didn’t do their confidence any good, and they took just 1 point from their last 4 games in the league (2 goals scored). To be fair, those four games did include an away game at the Etihad, a home game versus Arsenal, and a home game against Leicester. As to what’s about to come, manager Rafa Benitez will especially be eyeing gameweeks 9 and 10, and hope for good performances in the home matches in weeks 11 and 12. The upcoming game at Old Trafford isn’t counted on by Newcastle to yield any points, but considering the atmosphere there, you never know what a defensive masterclass by Benitez might bring.

Newcomers Cardiff City were knocked out of the League Cup by Norwich City (3-1 at home) in the second round, but considering their situation in the Premier League, they might not be too unhappy about this. The Bluebirds have scored just 4 goals in 7 games so far, but they’ve conceded 16 already, five of which were scored by Man City. Out of the next five gameweeks, the home games versus Fulham and Brighton are must-wins for Cardiff, while the other three games offer little hope on points, both in the Premier League and in FPL. Scoring seems to be a fundamental issue for the Welshmen though, so unless manager Neil Warnock finds his team a way to the opposition goal while tightening up at the back at the same time, hard times could be ahead for Cardiff.

Huddersfield Town are, at this moment, the Premier League team with the least goals scored (3), the most goals conceded (16, like Newcastle), and the least points accumulated (2, like Newcastle and Cardiff) after the first 7 games of the season. As a result, the Terriers are currently last in the league and the upcoming games don’t offer too many glimmers of hope for better times. Away games against a rapidly improving Burnley and an in-form Watford side don’t seem like the type of matches from which Huddersfield will take a lot of points, while the home game against Liverpool is likely going to be more about avoiding a complete massacre in front of their own fans. The home games in weeks 11 and 12 show some more promise, with Fulham and West Ham having conceded 11 and 8 goals in away games respectively so far. Nevertheless, manager David Wagner is going to come up with something special if he wants to keep the Terriers in the Premier League for another season.