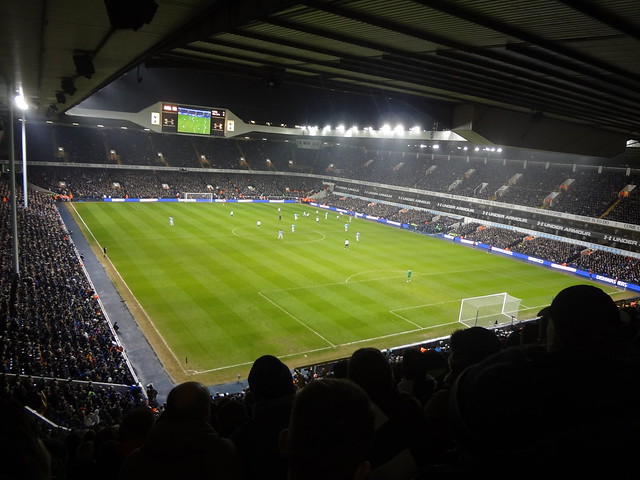 “White Hart Lane, the main challenger’s stadium” (CC by 4.0) by The Stadium Guide

For many FPL managers gameweek 35, and especially those who have already cashed in their second wildcard, was all about preparing for the two crucial end-of-the-season double gameweeks coming up next. There were important points to be earned this week as well though, both for the clubs and for fantasy managers. With games like Sunderland versus Bournemouth and Crystal Palace against Burnley there was sure to be fire in the battle for relegation, while it was interesting as well to see how Chelsea would fare away at best-of-the-rest Everton and if Spurs could keep the pressure on the Blues while hosting Arsenal at White Hart Lane.

The title fight
With three gameweeks to go Tottenham are the only serious title challenger left, trailing Chelsea by four points. While the table leaders experienced a more comfortable afternoon away at Goodison Park than many had expected, Spurs hosted up-and-down (but lately, mostly down) Arsenal, and they showed why they stand where they stand at the moment. An early second half strike by the inevitable Dele made it one-nil before an unnecessary challenge in the area by Gabriel Paulista caused a penalty just three minutes later. As we know, Harry Kane doesn’t forgive silly mistakes, two-nil and game over for the Gunners. Put kindly, Arsenal looked unreliable both at the back and up-front, while Spurs assets like Dele Alli, Harry Kane and Jan Vertonghen will be in hot demand for the remaining matches (four for Spurs, of which three versus second-half-of-the-table opposition).

Pivotal. That’s the right definition of Chelsea’s win over Everton on Sunday. It could also be the reason why you decide to use an Energy Casino promo code for your casino pleasure if you’re tired of managing your fantasy football team. Online casino and Fantasy Football are both types of online gambling. Back to the football and with Everton’s eight match unbeaten home run plus the presence of the League’s topscorer in the shape of Lukaku this match promised to be a tightly contested one. Everton wasn’t necessarily much worse than the Blues, players like Gueye and Tom Davies even played an excellent game, but in the end Chelsea’s organisation, counter-attacks and individual offensive quality made the difference. With one of the easiest end runs of all teams in the PL, keep an eye on Chelsea assets like Hazard, Pedro and Cahill.

The battle for Europe
Disregarding potential Europa League success for United this season one of the Manchester outfits is very likely to miss out on Champions League football next season. Both teams played sides that are battling to avoid relegation, with City visiting a shambolic Middlesbrough and United hosting a disappointingly Sigurdsson-dependent Swansea.

Surprisingly United recorded a draw for the tenth time this season, this time 1-1 courtesy of a late, but nothing less than brilliant, free kick by who else than Gylfi Sigurdsson. On the brink of half-time Rooney had converted an easily awarded penalty after Fabianski supposedly went outside the rulebook to stop Rashford. Qualification for the Champions League via the PL is no longer in their own hands, and with Bailly and Shaw joining four (!) other defenders on the injury list the ending of United’s season seems uncertain. They have the coach, the organisation and the talent to compensate the many injuries and the congested playing schedule, but is it enough to avoid another season without Champions League prestige?

Later on Sunday, City visited a Boro team that as of late has seemed destined to join Sunderland in the drop. The home side played a more than decent match, in fact they even took the lead twice, first through a counterattack set up by Friend and finished by Negredo, and later through a Negredo cross finished off by the impressive Calum Chambers. In the meantime Aguero had taken one back from the penalty spot after a light contact between Leroy Sané and Boro’s industrious De Roon resulted in a penalty. Wonder boy Gabriel Jesus eventually finished off an Aguero cross to put the final 2-2 score line on the board. Neither one of the teams really benefited from the single point, but if Boro want to have any chance of staying in the Prem, this game should be the benchmark for the difficult final three games.

The relegation fight
On Saturday Sunderland became the first team to officially be relegated from the PL this season. Though they showed some spirit, it could not be said of the Black Cats that they were ready to eat the grass for a victory. Visiting Bournemouth had relatively little trouble fending them off, apart from a few counter-attacks and set pieces, and man-of-the-moment Josh King slotted home on the break in the 88th, officially sealing Sunderland’s fate and bringing the Cherries another season of Premier League football. With home games against Stoke and Burnley coming up, the prolific attacking midfielder could well be continuing his golden FPL run.

Meanwhile, Burnley had to wait for it for 34 weeks, but in the 35th they finally recorded their first away win of the season. And what a moment to bring home the points. Burnley showed intensity and dedication as they overran Crystal Palace at Selhurst Park. Ashley Barnes and substitute Andre Gray both scored for the Clarets, while Tom Heaton (as usual) excelled in goal, supported by an excellent performance by Tarkowski on his first start this season. On the other side Crystal Palace are six points above the drop, but with away games versus the Manchester outfits and a home game against Hull in their last 3 it might turn out to become a stressful ending for Sam Allardyce.