Manchester United left it late to maintain their 100% start, with Marcus Rashford’s injury time winner ending Hull’s perfect start to the season in the process. The Red Devils are one of three sides on 9 points from 9, and alongside them are neighbours Man City, setting up a mouth-watering derby immediately after the international break. It was a relatively low-scoring week, with 22 goals scored across the 10 Premier League games, and Rashford’s goal was amongst four that were scored in the 89th minute or later. There were 3 penalty misses from five spot-kicks, and five teams picked up clean sheets.

This week’s Dream Team lined up in a defensive 4-5-1 formation, with Shay Given’s penalty save and bonus points earning him a place in goal despite his own goal proving to be the winner in the Everton v Stoke clash. Gibson, Valencia and Evans all contributed to clean sheets and picked up bonus points while Scott Dann’s late goal meant that he was also amongst the best defenders of the week. Alexis Sánchez’s goal and 2 assists and Raheem Sterling’s 2 goals meant that they were the highest scoring players this week, with 16 and 15 points respectively. 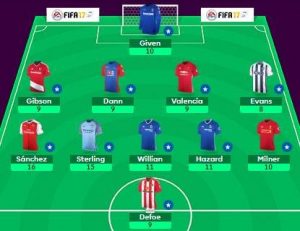 With no games this weekend we’ll be back next week with a preview of gameweek 4. Don’t forget to study those transfer deadline day deals and consider playing your wildcard if you want to get the likes of Jack Wilshere, Wilfried Bony, Moussa Sissoko and David Luiz in your team after their big moves!