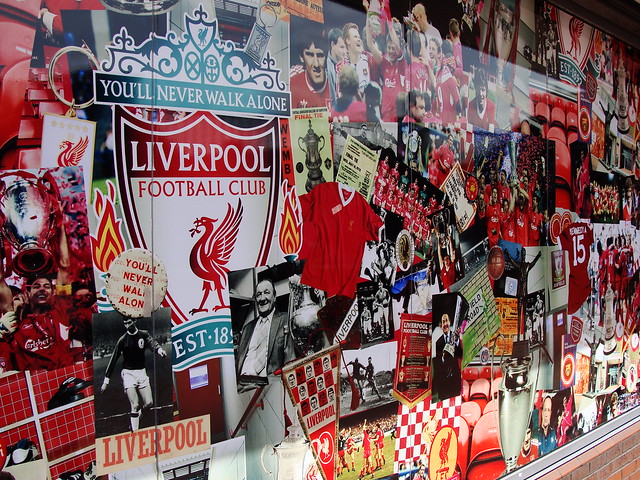 More player rotation. Less decision-time for Fantasy Managers. Premier League all week. That’s right, December has well and truly arrived, with three matchdays in the span of just one week as a tense build-up towards the much anticipated Christmas period. Gameweek 16 was the in-between one, squeezed in after last weekend’s boatload of goals and before the coming weekend’s entertainment. Apart from Arsenal, all other title chasers were facing relatively winnable fixtures, so let’s see how they fared.

Chelsea
Even without their Belgian superstar, Chelsea made it ten wins out of ten against a brave but ultimately lesser Sunderland squad. Eden Hazard was confirmed absent shortly before the game with a knock (he should be back this coming weekend, though) and replaced by last season’s star performer Willian, who then went on to assist Cesc’s winner in the 40th. Top-scorer Costa did not get on the scoresheet today, for once, while things at the back were business as usual for the Blues. Another game, another victory, another clean sheet. Not the best game by either team, but with an Away game at Palace coming up, you best bet on the Chelsea to make it eleven wins out of eleven. Indeed according to the tipping experts at Big Free Bet, Chelsea, who are on a hugely impressive solid run form, mean that at least one of Courtois, Alonso, Matic, Pedro, Costa or Hazard should be drafted into your squad in your next transfer opportunity. They are all good FPL bets with perhaps Fabregas as a differential to fantasy teams above you.

Liverpool
After dropping five points in two weeks the Reds faced just the right opposition in the shape of a Boro team that is uncomfortable leaving their defensive duties to go look for a goal, which is what they really have to do at home if they have any hope of staying in the Prem. Jurgen Klopp knew it, played it, and booked an easy 0-3 victory. Without the injured Coutinho the spotlights were taken by Adam Lallana (2 goals & 1 assist) and to a lesser extent Divock Origi (1 goal, 1 assist). Both could be considered bargains in the official fantasy game. Another positive was the clean sheet (finally!) accompanied by an excellent all-round display by rightback Clyne (finally!).

Arsenal
Of all contenders, Arsenal had the toughest mid-week challenge, visiting Goodison Park. In all honesty though, the home team were far from sturdy of late, and in-form Arsenal were expected to take the points back to London. Ronald Koeman had other plans. Everton looked discplined and inspired on Tuesday, pressing Arsenal enthusiastically and holding the lines defensively. The inevitable Alexis scored from a free-kick, before the tireless Seamus Coleman equalised just before half time, courtesy of a lovely center by his counterpart on the left Leighton Baines. Wales-captain Williams then sealed the deal five minutes before time, heading in a Barkley corner. Arsenal weren’t bad, but they looked overclassed physically and tactically, while Everton look ready just in time for the Merseyside derby on Monday.

Manchester City
City without Aguero is a different story. We know it, the other teams know it, Pep knows it. When Watford came to the Etihad on Wednesday, the Citizens hadn’t won in front of their own in three months. Pep’s men kept the three points at home this time, but it could’ve been different with a bit more luck for Watford. Zabaleta scored nicely from a De Bruyne cross, but City weren’t able to push through as Kun was missed and Iheanacho was surprisingly benched. Watford, led by the brilliant Amrabat and the ever-energetic Deeney once he came on (another rotation surprise), should’ve equalised through the disappointing Ighalo from eight yards out, which would’ve complicated things greatly for City, but the Nigerian missed. Not long after, as the Hornets chased the equaliser, Silva finished off the game after a counter attack and a simple assist from the decent Sterling. City faces Arsenal next, while unpredictable Watford visit the Stadium of Light.

Honourable mentions and this week’s DreamTeam
West Brom. Plain and simple. The Baggies are looking at a complicated fixture run until the New Year (United home, Arsenal and Southampton away), but their performance until now gives hope. They are in seventh place and booked a comfortable 3-1 win over leaky Swansea, their fourth victory in the last six games, courtesy of an official Rondón hattrick. He headed in three goals between the 50th and the 63rd minute, assisted twice by Brunt and once by Mattie Phillips. Looking at the coming games many managers will opt to get rid of West Brom assets, but the likes of Rondón, Dawson, Chadli, McAuley, Foster and Phillips might just be worth a little bit of patience and a little bit of risk-taking.

There were some big performances from midfielders this week, with the week’s Dream Team lining up in a 3-5-2 formation. Christian Eriksen and Adam Lallana were the stars of the week, both scoring twice and assisting once in their team’s 3-0 victories over Hull and Middlesbrough respectively. They secured 19 points each for their efforts, while up front West Brom’s Salomón Rondón scored a hat trick to help him to 17 points. 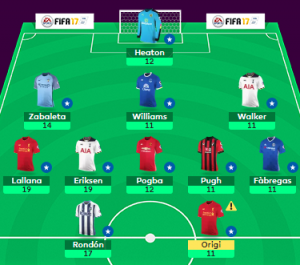