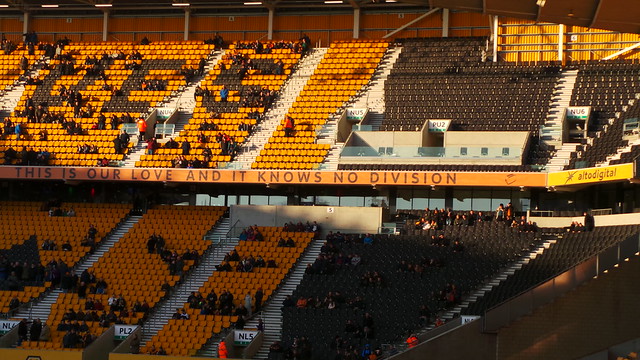 “Molineux, the Wolves’ home ground since 1889, back in the Premier League after 6 years” (CC by 2.0) by Gareth Williams

In anticipation of the 2018/2019 Premier League season’s kick-off between Manchester United and Leicester, at 20h00 on August 10th at Old Trafford, we’ll be taking a more in-depth look at the 20 squads that’ll be competing this year. In this tenth and final instalment, we’ll take a look at a revamped West Ham United and promising newcomers Wolverhampton Wanderers.

To put it mildly, West Ham’s 2017/18 campaign wasn’t great. The season started under manager Slaven Bilic, who lost his job to David Moyes by November 2017, and the Hammers tasted victory just twice by the time December came around. The team definitely found some stability over the Christmas period and a run of 10 games in which West Ham lost just once eventually resulted in a mid-table finish. Not bad, considering the start of the season, but far from satisfactory when considering the ambitions in East London.

Moyes decided to step down at the end of last season and experienced Chilean manager Manuel Pellegrini was brought in. The ex-Real Madrid and ex-City manager (he won the Premier League with City in 2013/14) is expected to lead West Ham out of a period of relative turmoil and instability since the club left the Boleyn Ground to play at the London Stadium in 2016. With the new manager have come several high-profile and promising players, including Lazio winger Felipe Anderson for £34.2 million, 21-year old French central defender Issa Diop for £22.50 million, Dortmund winger Andriy Yarmolenko for £18 million, and stand-out Swansea goalkeeper Lukasz Fabianski for £7.20 million. Both Jack Wilshere and Fulham’s Ryan Fredericks came in on free transfers. Collins and Evra were let go, Joao Mario’s loan wasn’t extended and Kouyaté was sold to Crystal Palace for £9.63 million.

After last season, and considering the renovation the squad has undergone over the summer, the Hammers will be aiming for a finish in the top half of the table. Whether they’re ready to compete for the European spots remains to be seen, but it’s not out of the question if Pellegrini can get his side going. The Chilean is known as a calm and low-key manager, who studies his opponents meticulously, a characteristic he might’ve developed while working as a civil engineer in Chile. He likes his teams to play a quick, passing game, to play cross balls to test the rival’s balance, and to create one-v-one situations, especially when counter-attacking. Combine this with the desire to press higher up the field and West Ham fans might be in for plenty of goals this season.

Few players will fit the title “potential FPL star” better than West Ham’s club record signing Felipe Anderson (£7.0m). The Hammers spent £34.20 million on the Brazilian winger who had an injury-riddled season last year with Lazio, resulting in 4 goals and 7 assists in just over 1,100 minutes of Serie A football. In the previous season, Anderson scored 4 and assisted 11 in 36 games for Lazio. While there is definitely still room to improve in the finishing department, the 25-year old is a player who can decide matches. The Brazilian loves to look for the 1v1 and attempt a dribble (as a matter of fact, he completed 6 successful dribbles per 90 minutes last season), and he has a good eye for his team mates. It will be interesting to see how he adapts to life in the Premier League, but he absolutely has FPL potential, especially considering he’s classified as a midfielder in the game.

Despite his re-classification as a forward, Marko Arnautovic is still one of West Ham’s most reliable FPL assets. The Austrian international scored 11 goals and provided 6 assists in 31 Premier League games during the 2017/18 campaign, which resulted in 144 FPL points. It should be noted that he was still considered a midfielder in FPL last year, so each goal was worth 5 points and each clean sheet would result in an extra point. Still, West Ham was far from a stable unit last season, and the Hammers are expected to line up as a more composed and offensive team this season under Pellegrini, which will hopefully lead to more opportunities for the forwards, i.e. Arnautovic. At a price of £7.0m, he should be on your watchlist, though West Ham’s start to the season is really hard, with the Hammers facing 5 ‘top-6’ teams in the first 10 gameweeks.

In the 2017/18 Premier League season, no other team conceded as many goals as West Ham did: 68 in 38 games. Their backline was slow and unresolved for most parts of the season, which explains the signing of right-back Fredericks, centre backs Balbuena and Diop and goalkeeper Lukasz Fabianski. The latter was one of the few stand-out performers in an otherwise weak Swansea City season that ended in relegation. The Polish stopper started in all of the club’s 38 Premier League matches and played an important part in that season’s 9 clean sheets. He was actually the third-best goalkeeper in FPL by points (157), just behind Ederson (158) and De Gea (172). He collected a total of 14 bonus points, which was more than the goalies from Manchester (10 points each), and despite the Hammers’ unforgiving set of opening fixtures, Fabianski’s Premier League pedigree and FPL price (£4.5m) should make him a candidate for your 15-man squad.

Out off all of this year’s promoted teams, Wolverhampton Wanderers look most likely to survive their return to the Premier League. Wolves convincingly crowned themselves champions of the Championship last season by winning 30 out of 46 games and accumulating an impressive 99 points in the process. Under Portuguese manager Nuno Espirito Santo, and with the backing of his compatriot Jorge Mendes (one of the most powerful football agents in the world), Wolves are hoping to return to the English elite division with a bang as they could aim for a comfortable mid-table finish.

The Wanderers have certainly not been sitting idly by while the summer transfer window got underway. With a particular focus on the Southern European markets, the club brought in a mix of big names and promising talents, such as Boro speedster Adama Troaré (€20 milliion, Portugal international central midfielder Joao Moutinho (€5.6 million), Brazilian forward Léo Bonatini (€4 million), and Portugal goalkeeper Rui Patricio (free). Last season’s loans of Atletico Madrid winger Diogo Jota (17 goals and 6 assists in 44 games), Porto centre-back Willy Boly (3 goals and 2 assists in 36 games), and 19-year old Monaco left-back Rúben Vinagre (fee unknown) were made permanent for a total amount of €26 million, while Benfica striker Raul Jiménez and Atletico left-back Jonny Castro were added to the roster on loan.

Manager Espirito Santo usually lines up his team in a flexible 3-4-3 formation that can go from 5-3-2 when defending to an ultra-offensive 3-2-5 when (counter-)attacking. The wing-backs are of crucial importance to Espirito Santo’s style of play, as they allow Wolves to stretch the playing field and create space for the central midfielders, all of which are excellent passers of the ball, both short and long. As a result, Wolves is a team that can hang back and wait for the counter opportunities, as well as dominate play and attack at will. The only question is how well they’ll be able to adapt their play to football in the elite division.

Despite coming over on a free transfer, as opposed to a hefty sum that would actually fit a player of his qualities, Rui Patricio is one of Wolverhampton’s most significant signings this summer. The 30-year goalkeeper is a reigning European champion after winning Euro 2016 with Portugal and he’s long been hailed as one of the best goalkeepers in Europe. With more than 300 Portugese league games, 49 Europa League games, and 26 Champions League games under his belt, Patricio won’t be too phased by the Premier League. At a price of £4.5m, he’s likely to find his way into plenty of FPL squads.

The Wolverhampton midfield is full of (Portuguese) talent and experience, with the likes of Ruben Neves, Helder Costa and the dangerous Diogo Jota all vying for a starting spot, but it’s this summer’s addition of Monaco midfielder Joao Moutinho that we’re highlighting today. The now 31-year old Portuguese playmaker has been linked to practically every big club in Europe over the course of his career, and not without reason. He’s comfortable playing in an attacking side as well as in a deeper role, waiting for the right moment to open up the game on the flanks or further up front. His passing is spot on, he can shoot from distance, and he’s likely to participate in set-pieces as well. Not bad, for £5.5m in FPL.

Up front, it’ll be interesting to see how Mexican international striker Raúl Jiménez will perform for Wolves in the Premier League. The 27-year old came over on loan from Benfica, but for a fee of €3 million, which would suggest Espirito Santo sees a role for him. In just 973 minutes of league football for Benfica last season, Jiménez scored 6 goals and provided 7 assists, and he also appeared in 5 Champions League games. If the Mexican can cement his place as the starting number nine for Wolves at the beginning of the new campaign, he would be, in combination with his price of just £5.5m an interesting option for the position of 3rd or even 2nd striker in your team.