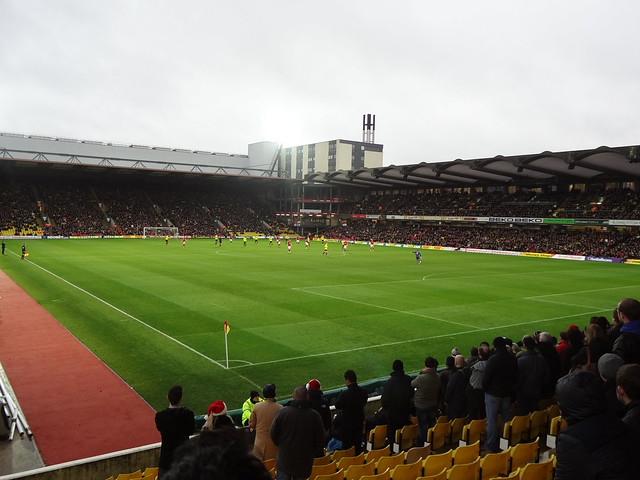 “Watford’s Vicarage Road, ready for another season of Premier League football” (CC by 2.0) by The Stadium Guide

In anticipation of the 2018/2019 Premier League season’s kick-off between Manchester United and Leicester, in just 2 days time at 20h00 on August 10th at Old Trafford, we’ll be taking a more in-depth look at the 20 squads that’ll be competing this year. In this ninth instalment, we’ll take a look at a Spurs side that has welcomed zero new players so far, and Javi Gracia’s Watford.

Since the arrival of Mauricio Pocchetino at White Hart Lane in May of 2014, Tottenham Hotspur have grown into a stable top 5 team in the Premier League. After finishing third, second and third in the league over the past three seasons, hopes for another top 3 finish are high again this year, especially considering the fact that the club will finally inaugurate the new stadium this year. The first match on their new home soil will be played against Liverpool in mid-September, until then their “home” games will continue to take place in Wembley.

Whether it has to do with the costs of the new stadium turning out to be considerably higher than expected or the club’s management being completely satisfied with the current team roster, we’re not sure, but Tottenham stands out during this summer’s transfer window by not having spent a penny on new recruits yet. Of course, Mauricio’s Pocchetino’s starting eleven have been more or less fixed over the past few seasons and it’s not all that difficult to guess how his team will generally line up again this season, but some concerns have been aired by pundits and fans alike about the club’s complete lack of activity on the transfer market. No players were sold (yet), while the only “new face” during pre-season was Dutch striker Vincent Janssen, who spent a season on loan at Fenerbahce last year.

With key players like Harry Kane, Dele Alli and Christian Eriksen, just to name a few, the foundation of Pocchetino’s Spurs is clear. His starting eleven know each other well and, considering their generally young ages, there’s still plenty of room for improvement on an individual level and as a group. Still, with the enormous investment required to build a new stadium, Spurs will be expected to finally start winning some silverware, the one thing that has eluded Pocchetino at Spurs until now. As a matter of fact, the last trophy lifted by Spurs was the League Cup in the
2007/08 campaign. In order to compete in all competitions (Premier League, FA Cup, League Cup, and the Champions League), a certain squad depth is required, a depth that Pocchetino simply doesn’t have at his disposal at the moment. He’s a great manager and Spurs are candidates for another high finish in the Premier League this year, but if the club wants to avoid another season without a prize, they’d do well to at least provide the Argentinian manager with more quality throughout the squad.

Christian Eriksen (£9.5m) is Tottenham’s chief creator, which is why he’s the first player we’d like to highlight first. The Danish attacking midfielder has long been an FPL favourite and he looks set for another season in the English top flight. As usual during the transfer windows, Eriksen was linked to Europe’s biggest clubs this summer, including FC Barcelona and Real Madrid, but the 26-year old wasn’t going to miss the club’s first steps in the new stadium. He scored 10 goals and provided 11 assists in the Premier League last season, with 199 FPL points as a result. Spurs are likely to be affected by the large number of players that were active in the late stages of the World Cup this summer and it remains to be seen how the change of stadium will be processed, but you can count on Eriksen to once again emerge as one of Tottenham’s stand-out performers.

When talking about Spurs, you can’t not mention Harry Kane. The 25-year old striker came up through the ranks at Tottenham and is an absolute fan favourite at White Hart Lane. His phenomenal scoring record probably has something to do with that as well: he’s scored 21, 25, 29, and 29 goals in the Premier League in the last 4 seasons. Besides his 29 goals last season, which were only bettered by a rampant Mo Salah, Kane also provided 2 assists, racking up a total of 217 points in FPL. The young Englishman might be rested for the first gameweek or two, but he’s expected to be banging in the goals again this season. Whether his Premier League and FPL pedigree justify his hefty £12.5 price tag is up to you.

Behind champions Man City and José Mourinho’s defense-minded Man United, Spurs had the next best defence in the Premier League last season, with just 36 goals conceded. The wizards behind FPL realized this as well and as a result, Tottenham’s complete defence (apart from Kyle Walker-Peters) is priced at £6.0, this season. After a successful World Cup, in which he even scored a stunning goal from a free kick against Croatia, Kieran Trippier is one of the more attractive options in the Spurs back line. The wing-back is part of a solid and experienced defensive unit, and he can add the occasional extra points from an assist or even a goal, as well, especially if he gets some set-piece duties from time to time.

Last season was a season with ups and downs for the Hornets. The start of the season under Marco Silva was impressive, with just one loss in the first 8 games, but things then took a turn for the worse as the team started slumping badly over the Christmas period, which led to Silva’s sacking. Current coach Javi Gracia was then brought in to restore stability and he guided Watford to an eventual 14th place. In other words, not exactly a campaign to write home about, but enough to secure another year of Premier League football. Pundits and Watford fans alike have pointed out though, on several occasions, that the final nine games of last season under Gracia resulted in just one victory and the team avoiding relegation by just a few points in the end. In 14 games under Gracia, Watford got 15 points.

So, whether Javi Gracia is the right man to lead the Hornets to a higher finish this year is still uncertain for many Watford fans, but the club has done its best on the transfer market this summer. On one hand, they sold their exciting Brazilian winger Richarlison to Everton for a whopping €40 million, as well as winger/wing-back Amrabat to Al-Nassr (€8.50 million) and forward Mauro Zarate to Boca Juniors (€2.50 million). On the other hand, the Hornets brought in winger Gerard Deulofeu from FC Barcelona on a permanent basis (€13 million), talented left-back Adam Masina from Bologna (€5 million), left midfielder Ken Sema from last season’s Swedish surprise package Östersund (€2.25 million), 22-year Spanish right-back Marc Navarro from Espanyol (€2 million), and keeper Ben Foster from relegated West Brom (fee unknown).

The Hornets will probably consider a comfortable mid-table finish without any real relegation worries at any point during the season as a realistic target for the 2018/19 campaign. They’re unlikely to seriously compete for a position that gives access to European football at the end of the season, but their team roster does like solid enough to finish well above the bottom spots. Manager Javi Gracia usually prefers a 4-2-3-1 formation, though a 5-4-1 formation with attacking wing-backs is an option as well. He focuses a lot on the game’s tactical aspect, and likes his teams to turn up prepared and as a solid unit. To consider him a very defensive coach would be an exaggeration, but Gracia definitely likes to have his defensive unit organized well before focusing on his side’s offensive plays.

One of Watford’s more shrewd acquisitions this summer is goalkeeper Ben Foster (€4.5m) from relegated West Bromwich Albion. The 35-year old is a Premier League veteran who hasn’t yet showed signs of slowing down anytime soon. In a largely chaotic West Brom campaign last season that saw the club ending bottom of the league, Foster recorded 10 clean sheets and a decent total of 123 FPL points. Assuming Javi Gracia can improve Watford’s defensive solidity in comparison to last season, Foster might turn out to be something of a bargain.

The departure of Richarlison has opened the door for some other talented players to show themselves this year. One of those players could be attacking midfielder Roberto Pereyra. The Argentinian has had his fair share of injury troubles since joining Watford in the summer of 2016, but in the periods that he was fit, he showed glimpses of a player that can be decisive for his team. The Argentinian can play both on the wings and in a more advanced position on the midfield, positions in which he can make the most of his creativity and excellent dribbling skills. In just 1,600 minutes of Premier League football last season, Pereyra scored 5 goals and assisted another 3, which makes his current price of £6.0m quite reasonable. He could be a great fifth midfielder in FPL, though we do recommend to keep an eye on his pre-season and on his fitness during the regular season.

The line that at the moment probably inspires least confidence at Watford is the attack. Current forwards Andre Gray, Troy Deeney, and Stefano Okaka scored a combined total of 11 goals last season, which is logically a statistic of concern for the Hornets. Of the three mentioned attackers, Andre Gray has shown the most promise during the pre-season, scoring goals and showing some good chemistry with other players in the team, like Deeney and Pereyra. The 27-year old scored 5 goals and gave 3 assists in just under 1,500 minutes of Premier League action last season, which roughly equals to a goal or assist every other game. If his pre-season form is anything to go by, Gray looks like a nailed-on starter for Watford, and at a price of £6.0 he could be both a great differential and a useful budget enabler.