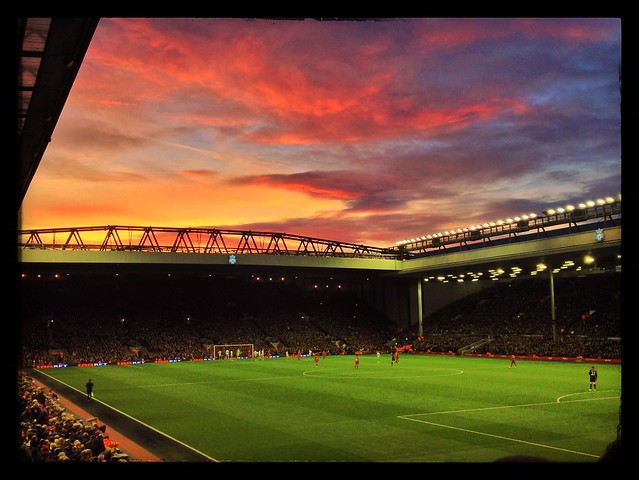 “Sunset over The Kop at Anfield” (CC by 2.0) by Ruaraidh Gillies

In anticipation of the 2018/2019 Premier League season’s kick-off between Manchester United and Leicester, at 20h00 on August 10th at Old Trafford, we’ll be taking a more in-depth look at the 20 squads that’ll be competing this year. In this sixth instalment, we’ll take a look at a Leicester team without Mahrez and a Liverpool team that finally looks ready to be a real title contender.

Leicester’s 2017/18 season in the Premier League wasn’t much of a memorable one, as the team spent most of the year around the mid-table positions. The last season started off badly, with just one victory in the first 8 games, which eventually lead to the sacking of manager Craig Shakespeare. He was replaced by French manager and ex-Southampton coach Claude Puel, who managed to turn things around, at least until early 2018, after which the Foxes slumped back into mediocrity. They finished comfortably as ninth in the league, which means no European football this year, and the quarter-finals were reached in both the League Cup and the FA cup.

Ever since Puel took over at Leicester though, there have been rumours about unhappiness among (some of) the players regarding the Frenchman’s management style. That’s the atmosphere in which last season ended and probably how the coming season will start. One of the major sources of frustration for many was Puel’s seeming inability to decide on a best eleven. His team usually turn up in a 4-2-3-1 formation, but he rarely fields the same starting eleven. For the sake of consistency, he’ll have probably looked into this over the summer, as well into the lack of attacking intent the his team displayed at times.

Bar the departure of star player Riyad Mahrez, the Foxes haven’t lost any key players so far, while they did bring in a few major reinforcements. Attacking midfielder James Maddison (14 goals and 8 assists in 44 games) was brought in from Norwich for €25 million in order to at least partly fill the gap that was left behind by Mahrez. Another major signing for the Foxes is right-back Ricardo Pereira from Porto, who cost €22 million and looks like he should slip into a starting spot right away. Liverpool reserve goalie Danny Ward (€14 million) and West Brom central defender Jonny Evans (€4million) also came to the King Power, with the latter especially being a very shrewd move. The ex-United man has played almost 250 Premier League games, is still just 30 years old, and looks set to form a central duo with Harry Maguire.

Those who consider Leicester assets for their FPL squad, consider Jamie Vardy. It’s that simple. The 31-year old central forward finished fourth with England at the Russia World Cup, after scoring 20 goals and providing a single assist in 37 Premier League games during regular season, despite the club’s overall mediocre season. Ever since he burst onto the FPL scene just a few years ago, Vardy has shown time and time again that he’s excellent value for money. Of course, a lot will depend on the form of the team, the tactics employed by Puel, and the extent to which the absence of Mahrez affects his own performances, but at £9.0m he should at least be on your watchlist. He willprobably be given the first gameweek off, but Vardy is a sure starter and a sure goalscorer, which is what FPL managers like to see.

After a successful season at Norwich in the Championship, English Under-21 international James Maddison (£6.5m) attracted the interest of a host of clubs, of which Leicester eventually managed to seal the deal. Maddison, though a different type of player than Mahrez, will certainly have to work hard to follow in the Algerian’s footsteps as creative heart of the Foxes, but it looks like he’s up to the challenge. He’s a very technical player with an excellent vision of the game, and he loves setting up the strikers just in front of him. It’ll be interesting to see how Puel fits him into the team and how he will associate with the rest of his team mates on the pitch, especially Vardy. They might just be a dynamic duo in the making.

Claude Puel has been criticized for taking an over-defensive approach to his games, though this might be in part because he didn’t feel at ease leaving the back four too exposed. The arrival of European champion and FC Porto powerhouse Ricardo Pereira could provide some relief in that light. The Portuguese right-back looks set to take over from Danny Simpson from the get-go (and Puel is now open to offers for Simpson) and it’ll be exciting to see if he can show his undeniable qualities in the Premier League as well. The Foxes paid a cool £17.5 million for him, so expectations are high. Pereira is a disciplined defender who tackles unrelentingly, but who’s not afraid to move up his flank and support in attack where possible either, which is something that was sometimes missing for Leicester last season.

Liverpool’s past season was spectacular, to say the least. Despite not bringing home any silverware, the Reds impressed all over England and Europe, as they finished fourth in the league and reached the Champions League final against Spanish giants Real Madrid. They did so by playing an exciting, energetic kind of football that often lead to games full of goals, like the Champions League semi-finals against AS Roma (winning 5-2 at home and then losing 4-2 away). At times, Jurgen Klopp’s men displayed some defensive frailty, though last season’s signing of Dutch central defender Virgil van Dijk hugely improved their defensive performances.

The defensive issues were mostly masked by the outstanding attacking performances though, in particular by Player of the Season 2017/18 Mohamed Salah. The Egyptian winger was simply sensational last season as he went on to score 32 goals in the Premier League, while providing assists for another 11. His current price tag of £13.0 is therefore hardly surprising. Besides obvious star man Salah, fellow attackers Roberto Firmino and Sadio Mané had great seasons as well, and Klopp will be counting on them again this season.

As Alex Oxlade-Chamberlain keeps suffering from his knee injury, winger Xerdan Shaqiri was picked up from relegated Stoke to play the role of understudy for the main guys up front. The big names brought in by Liverpool are aimed at improving the defensive stability though, with AS Roma goalkeeper Allison coming in for a whopping €62.50 million, making him the most expensive goalkeeper in history, and defensive midfielder Fabinho coming over from AS Monaco for €45 million. The 23-year Guinean central midfielder Naby Keïta was bought from RB Leipzig for €60 million. With just Emre Can leaving Anfield, it’s safe to say that nothing less than challenging for the title is expected from Liverpool coming season.

So much has been written about Mo Salah already in the run-up to this season, so we’ll instead look at other players in the Liverpool squad. For a price of £9.5m, number 9 Roberto Firmino is a very attractive asset in FPL, a statement supported by the fact that at the time of writing, he’s already part of 36% of all FPL teams. In Jurgen Klopp’s high energy, high pressing game, Firmino plays an integral part with his work rate, his ability to create space for others, and his talent for both scoring goals and setting up his teammates. If fit, the Brazilian is guaranteed to start, bar the possibility of rotation when the schedule inevitably gets (too) congested. He scored 15 goals and gave 8 assists in the Premier League last season, which saw him ending on a total of 181 points in FPL. In the premium segment for strikers, Firmino provides excellent value, assuming he can continue where he left off last season.

As mentioned earlier, this summer Liverpool decided to spend €62.50 million to make Roma goalie Allison the most expensive goalkeeper ever. The position in goal has been a source of uncertainty and frustration for management and fans alike over the past years, but it looks like people need worry no more. The Brazilian goalkeeper is an expensive, but excellent signing by the Reds, and he’ll obviously be a guaranteed starter as the season kicks off. With in front of him Virgil van Dijk starting his first full season at the club after already leaving a good impression since January 2018, Dejan Lovren full of confidence after a silver medal with Croatia at the World Cup, and the tireless upcoming full-backs Robertson and Alexander-Arnold at either side, the Liverpool defence looks more reliable than ever. At a price of £5.5, Allison is expected to find his way into a considerable number of FPL squads.

In midfield, new signing Naby Keïta will be raring to go, as Liverpool had already agreed on his signing during the course of last season. The Guinean midfielder won’t be the most attacking midfielder on the pitch, as he’s expected to be guarding the team’s balance in the middle, together with Fabinho, Henderson, and Wijnaldum (though not all of them will play at the same time), but he should get his opportunities in front of goal. It looks likely that Keïta will be in the starting eleven at the start of the season and if he can replicate his performance in the Bundesliga last year (6 goals and 5 assists in 27 games), he looks more than decent value at £7.5m.