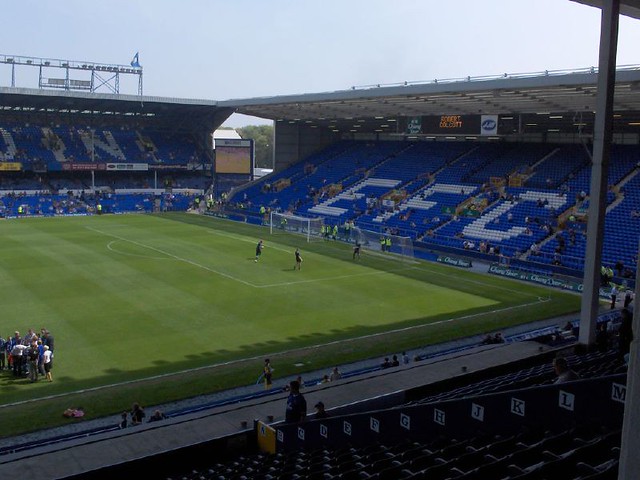 “Everton’s Goodison Park before kick-off” (CC by 4.0) by Fabio Paoleri

In anticipation of the 2018/2019 Premier League season’s kick-off between Manchester United and Leicester, at 20h00 on August 10th at Old Trafford, we’re taking a more in-depth look at the 20 squads that’ll be competing this year. In this fourth instalment, we’ll take a look at London outfit Crystal Palace and an ambitious Everton side and if you have ambitions on getting a return on your Premier League opinions then consider bettingsites.ltd.

Crystal Palace had a bit of a roller coaster season last year. The Londoners went through an ambitious pre-season in which Dutch manager Frank de Boer was appointed and was tasked with transforming the team into an entertaining side, with a focus on ball possession, an attacking mindset, and new players to usher the club into this new era. De Boer was sacked four games into the season, with an end result of four losses and zero goals scored. Good old Roy Hodgson became his successor and the winless and goalless streak was extended to a horrifying 7 games. By that time, the Eagles were last in the league by a four point difference and relegation never seemed so sure so early in the season. Hodgson managed to turned it around though, and Crystal Palace ended up finishing eleventh, which was an incredible feat, all things considered.

This season, the club will be looking first of all to avoid starting off like last season (no surprise there). Looking beyond that obvious statement, Crystal Palace will be aiming for a finish in the top half of the table under Roy Hodgson. Star player Wilfried Zaha is still with the club at the moment of writing, though rumours of him stepping up a level and leaving the club have been popping up since May. The Eagles have spent considerable money on new players over the past few years, so it’s likely that the priority in terms of players this pre-season will be to strengthen where possible, but more importantly to keep Zaha on board and build a team around him, as well as other key players such last season’s FPL surprise package Luka Milivojevic, ex-Liverpool defender Mamadou Sakho, and Belgium’s Christian Benteke.

So far, Crystal Palace haven’t lost any of their key players yet. Cabaye, Delaney, and Sako left the club, but you would not consider them certain starters. Jordon Mutch came back to the club after a loan spell at Vancouver in the Major League Soccer, while Spanish goalkeeper Vicente Guaita joined the Eagles on a free transfer from LaLiga side Getafe. The 31-year was considered one of the best and most promising goalies in the Spanish first division during his spell at Valencia some years ago, and he’ll be competing with Wayne Hennessey and Julian Speroni for a starting spot. Palace have got their goalkeeping business in order and Guaita might be worth keeping an eye on.

Wifried Zaha (£7.0m) is the absolute star at Crystal Palace and he could provide incredible values at his price. We’re stating the obvious here though, so instead we’ll first focus on central midfielder Luka Milivojevic. He was priced at £5.0 last season, so with 10 goals and a single assist, the Serbian provided one of the best values for money in the Premier League. It’s worth noting that 7 of those goals came from the penalty, which makes him a real specialist, but which also makes it less likely for him to equal or better his goal tally this season. He’s priced at £6.5 for the 2018/19 season, which is not that cheap for a midfielder who scored three and assisted one in 36 games, but guaranteed penalty and set-piece duty does have its value.

In an earlier article, we’ve already mentioned the young right-back Aaron Wan-Bissaka (£4.0m) a potential FPL bargain and budget enabler. When starting right-back Joel Ward got injured last season, Wan-Bissaka deputised and did so with success. He ended up playing 7 Premier League games, as well as winning the award for Crystal Palace Player of the Month in March 2018. Fosu-Mensah won’t be returning to Selhurst Park, so Wan-Bissaka and Ward will most likely be fighting for a starting spot. Keep an eye on the pre-season, because a starting right-back at £4.0m is usually FPL gold.

On the other side of the Palace defense, Patrick van Aanholt might be providing value of another kind. The marauding Dutch left-back was bought from Sunderland after the 16/17 season for €10.50 million and hasn’t failed to demonstrate his attacking abilities since then. Last season, only Marcos Alonso scored more than Van Aanholt’s 5 goals, and the latter played five games less. His price could be a problem though, because at £5.5, competition is stiff, with the likes of Bellerín, Maguire, and Tarkowski available at that price or less. Whether the Dutchman is worth it or not will largely depend on Palace’s ability this season to keep a clean sheet every now and then.

Like Palace, Everton’s season last year was kind of up and down. Dutch coach Ronald Koeman was signed to launch the attack on the traditional English top teams, and with him came a plethora of new signing for a total value of more than €200 million, including FPL favourite Sigurdsson (€50 million), Michael Keane (€28.50 million), Jordan Pickford (€28.50 million), Walcott (€22.50 million), and Tosun (€22.50 million). Not long into the season, Koeman was fired due to disappointing results and in came Sam Allardyce, who threw the new attacking tendencies overboard and created a solid unit that finished 8th.

This summer, the Toffees replaced Big Sam with Watford’s Marco Silva, who so far has brought in one exciting name, namely his former pupil Richarlison, the 21-year old Watford attacker who scored 5 goals and provided 5 assists in his first Premier League season. He had a quiet second half of the season, but overall he greatly impressed fans and foes alike. Several players have left the club already, including Rooney, Klaassen, Funes Mori, and Robles, of whom only Rooney had a serious role last season.

Marco Silva is known as a relatively attacking coach, but one who first of all focuses on creating a solid defensive structure. He favours a relatively high defensive line that presses upwards and pacey wingers fit the style he likes to play. In that light, the signing of Richarlison isn’t only not very surprising, but potentially very interesting, both from the point of view of a fan and of an FPL manager. He’s not a madman though, and he very much values a clean sheet, as well as a quick counter-attack. With players like Richarlison, Walcott, Sigurdsson, Baines, and Coleman, Everton look like a potential outfit to behold this season, especially in combination with their relatively kind opening set of fixtures.

Considering his recent £40 million move from Watford to Everton, as well as his already-existing FPL potential, the first name on this list is Richarlison. Under Marco Silva at Watford, the lightning-fast attacker played as both a winger and a striker, and introduced himself in impressive fashion during his first season in the Premier League (5 goals and 5 assists in his first 12 gameweeks). Silva’s mid-season sacking also saw Richarlison’s performance plummeting though, which infuriated some FPL managers at the time, but which will sound enticing for many of this season’s FPL managers. It looks like the Brazilian will be starting on either one of the wings at the start of the season and with a price tag of just £6.5m, he should be around the top of your watchlists.

From the Toffee defence, we’ve chosen to highlight an all-time Fantasy favourite who saw most of last season marred by injury, namely left-back Leighton Baines. In less than 2,000 minutes of Premier League football, the 33-year old Englishman still scored 2 goals and provided 3 assists, helping him to reach a total of 82 FPL points. Baines is known for his forward runs, as well as his often excellent set-pieces. At Everton, he usually gets involved in corners, free kicks, and even penalties, though that role may be reserved more often for Sigurdsson or Tosun this season. Everton is allegedly interested in Barcelona substitute left-back Lucas Digne, possibly to rotate with Baines rather than replacing him, so keep an eye on the developments. With a price of £5.5m, Baines doesn’t come cheap, but if he nails down a starting spot, he might well be worth it.

Cenk Tosun is more than worth mentioning as well, but instead we’ll take a quick look at another player who’s expected to step up this season, Gylfi Sigurdsson. The Icelandic midfielder became a real FPL favourite back at Swansea, where he formed the beating heart of the team, but he didn’t really manage to make his mark on Everton last season, during an admittedly messy season. The 28-year old scored just 4 goals and assisted another 4 last season, which is disappointing considering his tallies during his last two years at Swansea (9 goals and 13 assists in 16/17, and 11 goals and 4 assists the year before). He can both score and feed the attackers in front of him, while he’s considered one of the best set-piece takers in the Premier League. His price dropped to £7.5m this season, which makes him a very attractive midfield option in FPL.