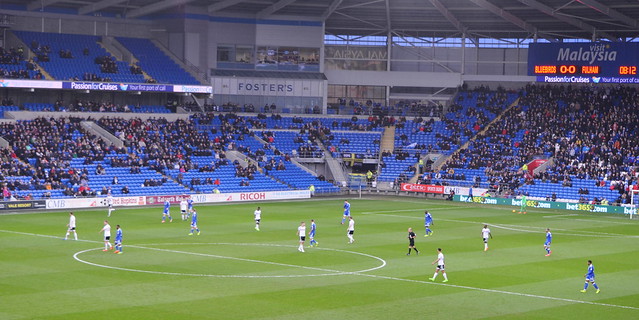 “Cardiff City vs Fulham, last season in the Championship” (CC by 4.0) by Nick

In anticipation of the 2018/2019 Premier League season’s kick-off between Manchester United and Leicester, at 20h00 on August 10th at Old Trafford, we’ll be taking a more in-depth look at the 20 squads that’ll be competing this year. In this third installment, we’ll take a look at promoted Welsh side Cardiff City and a renewed Chelsea side. There will be a lot of Premier League betting interest in both clubs and if you want to have a flutter then the best football betting sites may help your returns.

Despite the relegation of Swansea City last season, Wales has kept a representation in the Premier League, namely Cardiff City. The Bluebirds leaned heavily on their home form and their defence in the Championship. Their defence was actually the best in the league (together with Wolverhampton), with 19 clean sheets in 46 games as a result. Of those clean sheets, 11 came at home, where Cardiff won 16 out of 23 games. In terms of scoring goals though, the Welshmen do need to improve, as their tally reached 69 goals for the season and only one player in the squad managed to reach double figures:  midfielder Callum Paterson (10 goals and 5 assists in 32 games). Junior Hoilett (9 goals and 11 assists) and Kenneth Zohore (9 goals and 5 assists) were the second and third-most prolific players for the Bluebirds.

This season, Cardiff will be one of the smallest clubs in the English elite division in terms of budget. It looks probable that they will have a defensive approach again this season, as this is what brought them to the highest tier in the first place, and coach Neil Warnock’s role will be crucial as well. The 69-year Englishman is known for his tactical prowess, but his club will need to make moves on the transfer market if they want to have any chance of extending their stay in the Premier League by at least one more season.

So far, the Bluebirds haven’t had to let go of any key players, while they have been reasonably active on the transfer market already. They brought in striker Bobby Reid from Bristol City and winger Josh Murphy from Norwich for a combined price of just over £20 million, while ex-City left-back Greg Cunningham (£3.6 million from Preston) and goalkeeper Alex Smithies (£3.6 from QPR) also joined. The Welsh side will be hoping for a return of Liverpool midfielder Marko Grujic, albeit on loan, and they’ll have to bring in some more Premier League experience, especially up front. West Brom’s Salomon Rondon has been mentioned, but no more than that up until now.

One of the most impressive players at Cardiff City last season was English central defender Sean Morrison. Besides leading the league’s joint-best defence and promoting to the Premier League, he also scored 7 goals and provided 3 assists in 39 games, which made him the fourth-most productive player in the squad. The tall defender actually had an attempt on target every 67 minutes on average last season, which is higher than any defender in the Premier League last season. Of course, this season will be something else entirely for the Bluebirds and at a price of £5.0 Morrison has some fierce competition in FPL (Alexander-Arnold, Tarkowski, and Cedric, just to name a few), but he might be worth placing on the watchlist.

Expectations are high in Cardiff when it comes to new boy Bobby Reid, who came over from Bristol City for just over £10 million. The 25-year old striker scored an impressive 19 goals for Bristol last season, while also setting up another 7 goals, and he featured in every of team’s 46 Championship matches. Reid plays an energetic type of game and he has pace to burn, so his price tag of £5.5 in FPL makes him a candidate for the position of third striker in many squads. His exact role for the coming season is still unclear though, because more attacking reinforcements at Cardiff are expected before the start of the season.

In midfield, we’ve chosen to highlight Joe Ralls, about whom manager Neil Warnock said last season that he’s the first name he writes on the team sheet for every game. For FPL managers, guaranteed playing time is always an attractive factor. Ralls is the team’s playmaker from slightly deeper down the pitch, and he’s on penalties and set-pieces as well. The former England U19 international scored 7 goals and assisted 5 in 37 games last season. At a price of just £5.0, Ralls might be an interesting budget enabler and/or fifth midfielder, considering his role and position in the squad.

It’s only a week or two that Chelsea really seem to have things on the rails in terms of their preparation for the new Premier League season. The main reason for that is the change of manager, which can take time sometimes and as a club you generally don’t want to start stirring the transfer market until it’s 100% clear who the manager will be. We know now that Napoli’s Maurizio Sarri will be leading Chelsea into the new season, and with him comes an entirely different style of play.

Sarri is an Italian coach who has been praised wide and far for his willingness to play attacking football that entertains both his players and the fans. His teams tend to value possession and they press high up the pitch when defending. Sarri will most likely have Chelsea play like a tightly knit unit, both in attack and defence, and he might very adapt the formation used by his predecessor Antonio Conte. A starting line-up with four defenders, for example, is not unthinkable.

When such an extensive change in managerial style takes place, it’s inevitable that it will have a profound effect on the player roster as well, especially at a big club like Chelsea. As mentioned before, Chelsea up until now have been very calm on the transfer market, which makes sense considering the very recent arrival of Sarri. The first confirmed incoming transfer immediately made an impact though, as Napoli’s central midfielder Jorginho followed his coach to London, despite rumours for weeks that he was very much on his way to Guardiola’s Manchester City. The Italian international is likely to play a major role in Sarri’s plans and more players are undoubtedly following him, while some names, both big and small, might be leaving as well. The constant rumours concerning key players like Kanté, Hazard, and Courtois definitely don’t help the team’s preparation for the new season, while interest in new faces like Daniele Rugani, Aleksandr Golovin, and Thiago Alcantara hasn’t materialised (yet).

It’s also worth mentioning that Chelsea won’t be competing in the Champions League this season and that the club might very well feel some serious strain as a result of the World Cup. Key players like Hazard, Kanté, Giroud, Cahill, and Willian, among others, went far in Russia and it’s likely that they won’t be completely match-fit by the 11th of August. In other words, some big Chelsea names might be missing out on the action during the first few weeks of Premier League bonanza.

As mentioned earlier, as a result of the radical changes at Stamford Bridge this season, it’s not entirely clear how Chelsea will line up yet this season. Assuming he stays to play under Sarri though, the first player on this list should be Eden Hazard. The Belgian superstar had a magnificent World Cup, reaching the semi-finals and taking home the bronze medal, and it’s not unlikely that he’ll be bringing some of his blistering form in Russia to England. Do keep in mind that he might be missing out on the first few weeks of Premier League action. Despite the fact that he’s one of the official game’s best players (at a premium price of £10.5), we do recommend to avoid building your squad around him for now, as it’s still not certain whether he’ll really be staying with the Blues or not.

It remains to be seen in which formation Sarri will have his men line up for the opener at Huddersfield, and if the emphasis will be on a defence with 4 or 5 men. In any case, it seems likely that Chelsea mainstay Cesar Azpilicueta will be a part of the defence, regardless of its set-up. The Spanish defender was converted from right-back to right-most central defender in a three-man defence under Conte and he’s shown that he can excel in both positions. With a price tag of £6.5, he’s one of the most expensive defenders in the game, but if he fits Sarri’s plans, he might well be a guarantee for clean sheets and some attacking support every now and then from gameweek 1 to 38.

In attack, Chelsea can count on Olivier Giroud and Alvaro Morata as pure strikers. It does seem likely that another striker of name will be brought to the club shortly, though it’s not impossible to imagine that Sarri will play with Giroud or Morata up front this season. The latter seems the most likely to form part of the manager’s plans. In his debut season last year, the 25-year Spaniard started off well, but then lost much of his momentum in the second half of the season. He still managed to score a total of 11 goals and provide 6 assists in 31 Premier League games, which means he was involved in a goal every two games, roughly speaking. In the end not bad for a first season in a new country and he might well perform considerably better this season. As everything that concerns Chelsea at the moment, keep an eye on their pre-season.